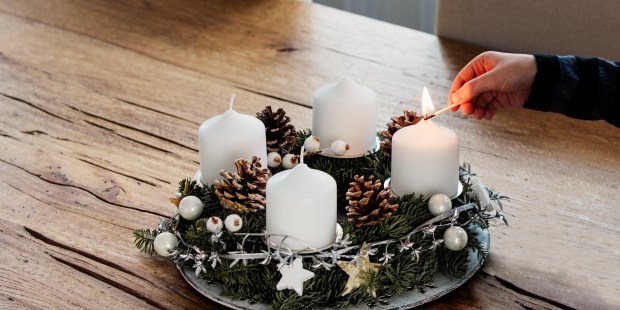 Advent is more than a countdown – it’s a season of prayerful expectation of the coming of Christ at Christmas and of His second coming.

Advent comes from the Latin word adventus (which means “coming ” or “visit”) and is the designated liturgical season awaiting the coming of Christ at Christmas. The Incarnation, when Christ became man, is of central importance to our faith. The Incarnation changed salvation history forever and, therefore, is deserving of a time of expectation preceding it. Advent, however, is not only a time to prepare for Christmas, but also to recall that Christ promised He would come again at the end of time. The Church invites us to enter into Advent through increased prayer, frequenting of the sacraments and pious acts, recalling Christ’s presence in our lives.

When does Advent occur? Why might I see the colors purple and pink throughout the season?

In the liturgical calendar of the Catholic Church, the first day of a new year is not 1st January, but rather the first Sunday of Advent. Advent is considered the first liturgical season of the year, beginning four Sundays before Christmas and ending on Christmas Eve. Since the day of the week on which Christmas Day occurs changes each year, Advent can vary slightly in length.
Violet and rose are the two designated liturgical colors that represent the Advent season. These may be represented in the priests’ vestments, tabernacle veils, altar frontals and the Advent wreath. Violet is used on the first, second and fourth Sundays of Advent and represents repentance as well as Christ’s royalty. The color rose is reserved for the third Sunday of Advent (also known as Gaudete Sunday) and represents the joy of Christ’s coming.Why does Christmas require an entire liturgical season of expectation?
Christmas – the day on which Christ was born in the flesh for the redemption of the world – is the day when the course of salvation history changed forever. St. Thomas Aquinas, a Doctor of the Church, explains the immense significance of the Incarnation in this way: “It is evident that God’s Son took our flesh and came to us not for a trifling reason, but for our exceedingly great good. He bound Himself to us, as it were, by deigning to take a human soul and body and to be born of a Virgin, in order to bestow His Godhead on us. Thus, He became man that man might become God…” (St. Thomas Aquinas, The Three Greatest Prayers: Commentaries on the Lord’s Prayer, the Hail Mary, and the Apostle’s Creed).
In the Catechism we learn that “[t]he coming of God’s Son to earth is an event of such immensity that God willed to prepare for it over centuries. He makes everything converge on Christ: all the rituals and sacrifices, figures and symbols of the ‘First Covenant’. He announces him through the mouths of the prophets who succeeded one another in Israel” (Catechism, 522). One of many such proclamations in the Old Testament is that of the Psalmist: “O Israel, hope in the LORD! For with the LORD there is steadfast love, and with him is great power to redeem. It is he who will redeem Israel from all its iniquities” (Psalm 130:7-8).
This time of expectation and preparedness did not only occur before the Incarnation, but also is part of each liturgical year in the present day. The Catechism states, “[w]hen the Church celebrates the liturgy of Advent each year, she makes present this ancient expectancy of the Messiah” (Catechism, 524).

Advent is also a time to prepare our hearts for the Second Coming of Christ.

As Catholics, we believe that Christ will come again to earth at the end of time; thus we profess in the Creed each Sunday, “He will come again in glory to judge the living and the dead and his kingdom will have no end” (Nicene Creed). During Advent, as we prepare for Christ’s coming at Christmas, we also recall the promise of Christ’s return. The Catechism tells us, “by sharing in the long preparation for the Savior’s first coming, the faithful renew their ardent desire for his second coming. By celebrating the precursor’s birth and martyrdom, the Church unites herself to his desire: “He must increase, but I must decrease” (Catechism, 524).
Advent is thus a time of vigilant expectation for the Second Coming as well as an acknowledgment that we will be judged by Christ for our actions and decisions. It is for this reason that Advent is a time of repentance – we wait in expectant joy for the coming of Christ, but should also seek forgiveness for our sins so that we might be ready to account for our lives. The Gospel of Mark proclaims, “Watch therefore — for you do not know when the master of the house will be coming – in the evening, or at midnight, or at cockcrow, or in the morning – lest he come suddenly and find you asleep” (Mk 13:35-36).
In an Angelus message, Pope Benedict XVI teaches us about this call to watchfulness: “‘Watch!’ This is Jesus’ call in today’s Gospel. He does not only address it to his disciples but to everyone: ‘Watch!’ (Mk 13:37). It is a salutary reminder to us that life does not only have an earthly dimension but reaches towards a “beyond”, like a plantlet that sprouts from the ground and opens towards the sky. A thinking plantlet, man, endowed with freedom and responsibility, which is why each one of us will be called to account for how he [or] she has lived, how each one has used the talents with which each is endowed: whether one has kept them to oneself or has made them productive for the good of one’s brethren too” (Pope Benedict XVI, Angelus Message, November 27, 2011).There are many practical ways through which we can enter into the season of Advent.
Liturgical seasons exist not only for the purpose of celebrating Mass on Sundays, but also for our own daily spiritual benefit. Rev. C. John McCloskey, Research Fellow at the Faith and Reason Institute, recommends to Aleteia readers a number of ways in which we can more fully enter into the spirit of Advent – a spirit of  expectation, watchfulness, repentance and joy.
– Prayer
– Fasting
– Giving
– Action
Fr. McCloskey’s pastoral suggestions are just a few of the ways that one can prayerfully enter into Advent. The Church offers us this time of expectation so that we can more fully prepare for the joy and grace received on Christmas.