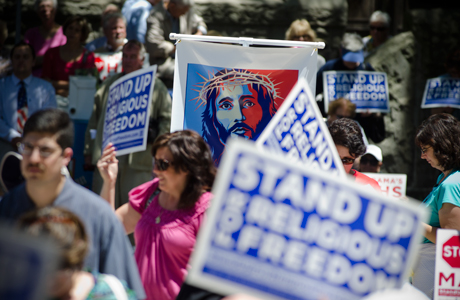 The department of Health and Human Services has released a new 80-page  Notice of Proposed Rulemaking on recommended preventive services policy today, with new rules on regarding religious exemptions from the mandate to cover all FDA approved contraception and sterlization procedures in insurance plans.

CNN reports about the new rules: "As part of the new initiative, groups that are insured — such as student health plans at religious colleges — would be required to let their insurer know that certain participants would like contraception coverage. The provider would pay for the contraception separately."

However, Catholic News Service reports the new rules specifically do not grant any exemption for for-profit organizations that may be run by people with conscientious objections to providing contraception and sterlizaiton procedures:

"The new proposed rules specify that no exemption will be given to 'for-profit, secular employers.' Some for-profit entities such as Christian-owned toy retailer Hobby Lobby have sued the federal government over the contraceptive mandate, saying that it violates the religious beliefs of the owners and the faith-based company outlook, and so they should be entitled to a religious exemption."

Talking Points Memo points out: "The proposed rule details a principle announced nearly a year ago that permits religious organizations like universities, charities, and hospitals to decline to pay for birth control coverage for their employees. If a group avails itself of that exemption, their insurance company would be required to provide the service to the organization’s employees for free."

The United States Conference of Catholic Bishops issued a brief news release with a short statement from its president, Cardinal Timothy Dolan of New York: “Today, the Administration issued proposed regulations regarding the HHS mandate. We welcome the opportunity to study the proposed regulations closely. We look forward to issuing a more detailed statement later.”

On his blog 'Distinctly Catholic' on the website of the National Catholic Reporter, Michael Sean Winters writes that the new HHS rules are "really nothing short of a miracle" for the Catholic Church. Given the fact that Obama won reelection by such a large margin, even among Catholics, it would seem that Obama has no political reason to change anything: "The White House gave more than they had to. Politically, this is a huge win." He says he thinks the new rules will give protection to most religious organizations that wanted it. He does, however, point out that the rules do not make any exceptions for for-profit organizations:

"The new changes do nothing about for-profit employers. Some of those employers are currently suing the government in court. Those cases will continue. They may flourish or they may fail, and you may wish for one outcome or the other depending on how you weigh the relative advantages of near-universal contraception coverage versus holding to a broader understanding of conscience rights. I support the idea that Hobby Lobby should get an exemption and I suspect they can make a case that they are a religious organization deserving of RFRA protection, even if they are a for-profit company and, so, are not covered by the rules issued today."

Even so, he thinks it would be a mistake for the USCCB to oppose these new rules given what he sees as a big political win. He did, however, offer a qualification to his judgments: "I am not a lawyer, and so I will wait to hear what some of my lawyer friends have to say on the subject before giving it a full-fledged, 'Distinctly Catholic' imprimatur."

Over at CatholicVote.org, Matt Bowan says he thinks Winters has gotten some of his facts wrong about the new rules: "Winters was wise to qualify his remarks, because his enthusiasm lead him to several basic factual errors that undermine the heart of his endorsement." Contra Winters, Bowan says the new rules do not eliminate the previous restrictive definition of what organization can be exempted on religious grounds, but instead attempts to work-around the problem, which Bowan calls "an accounting gimmick".

Thomas Peters, also of CatholicVote.org, says the new set of rules "makes some progress but still does not go far enough". He says "the USCCB was not even consulted about this most recent 'compromise' — that should tell us all we need to know." In an update on his post, he writes: "It also fails to protect non-profits like Catholic Charities and universities like Notre Dame! The Obama administration will go to any length to confuse and obscure the real issues here. The government shouldn’t need 80+ pages to respect our first amendment rights!"

Priests for Life issued a press release with a statement from its National Director, Fr Frank Pavone, who rejected any compromise on the rules: "We see only one acceptable change regarding the mandate: rescind it completely." His full statement:

“The HHS is giving the public an opportunity to provide its feedback to the proposed rules. I first of all want to urge the public to take advantage of this opportunity. Moreover, we at Priests for Life remind the Administration that religious liberty does not just belong to religious groups and individuals; it belongs to all Americans. Objections to contraceptives and abortion-inducing drugs aren’t based just on dogmas and Bibles, but on adverse health consequences and the fact that human beings, no matter how small, should not be killed. We see only one acceptable change regarding the mandate: rescind it completely.”

Michael P. Warsaw, President and Chief Executive Officer of EWTN Global Catholic Network, issued a negative statement about the new rules, saying "We have analyzed today's notice with our legal team from the Becket Fund for Religious Liberty and the initial conclusions are not promising…[We are] highly doubtful it will provide EWTN with any relief from this immoral mandate." He offered three reasons why and said EWTN was commited to continuing their law suit. Here is his full statement:

"This morning the US Department of Health and Human Services issued a notice of proposed rulemaking on the government mandate that employee health plans must provide contraception, sterilization and abortion-inducing drugs as part of their coverage. On February 9, 2012, EWTN was the first organization to file a lawsuit challenging this mandate shortly after the original rules were promulgated by the government. That lawsuit is still pending in the US District Court in Birmingham, Alabama.
We have analyzed today's notice with our legal team from the Becket Fund for Religious Liberty and the initial conclusions are not promising. First, this is simply a notice of a proposed rule; it is not an actual rule that changes anything. Second, while the proposed rules might expand the mandate's religious exemption for some organizations affiliated directly with the Church, it does not appear that EWTN will qualify for this exemption. Third, the proposed rules have not dealt with the concerns of self-insured health plans like EWTN's. Today's notice from the government simply kicks this can further down the road.
Sadly, throughout this proposed rule, the government continues to make the erroneous assertion that contraception, sterilization and abortion-inducing drugs are health care. They are not.
We will continue to study this notice with our attorneys, but are highly doubtful it will provide EWTN with any relief from this immoral mandate. EWTN remains firmly committed to pressing forward with our case in the Federal Courts and will take all steps necessary to challenge this unjust mandate."