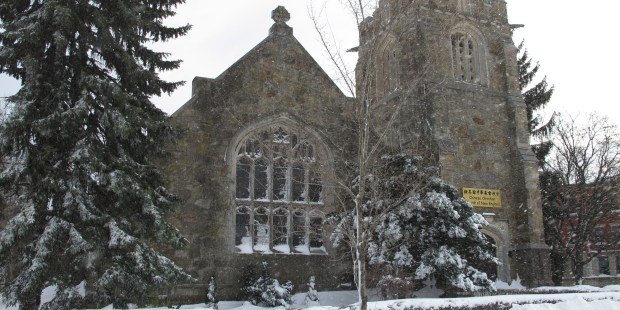 HAMDEN, Conn.—A snow storm of historic proportions led to the cancellation of Sunday Masses throughout New England and statements from bishops that the faithful could be exempt from their Sunday Mass obligations.

Nemo, the result of two winter storm systems that converged on the northeast, began to hit the region Friday, dumping upwards of 40” of snow and not leaving enough time for life to return to normal before weekend Masses.

“Living in Manhattan I was pretty fortunate,” said Manuel Albino, who works at the Xavier Society for the Blind. “My parish is only two and a half blocks away and it is on a major cross street. The sidewalks were generally clear and the church building was quite warm. Some of the elderly that usually come stayed in due to safety concerns but overall attendance did not decrease.”
But many people to the north and east of New York City were housebound for the weekend because of the blizzard. Several dioceses and archdioceses issued statements saying that if it was too dangerous for a person to get out for Sunday Mass, he would not be obligated to attend.

The worst-hit regions seemed to be in Massachusetts and Connecticut. Nutmeg State Gov. Dannel Malloy issued a statewide travel ban that was not lifted until Saturday at 4pm, and authorities continued to discourage travel so that road crews could more easily clear snow from highways and city streets, and so emergency vehicles would not be hampered.

“Regarding the attendance at Mass this weekend, Catholics should, first and foremost, carefully heed the safety directives of state and local officials,” read a statement on the website of the Archdiocese of Hartford. “Members of the Church who plan to attend Mass on Saturday evening or Sunday should use prudence and extreme caution. In those situations where the conditions are extremely difficult or dangerous, the faithful are reminded that they are, of course, dispensed from the normal obligation. (Code of Canon Law, Canon 1248 § 2).”

The Archdiocese of Boston issued a similar statement, saying the faithful should “exercise prudence…as they seek to fulfill their Sunday Mass obligation.” The statement added that archdiocesan officials have been in contact with parish staffs about the steps that can be taken to prevent building damage and accidents during the storm.

Whether or not it was dangerous to travel to church, many people simply could not dig out in order to attend Mass, and if they could, many local roads still had not been cleared by Sunday morning. Parishes in the worst-affected areas simply cancelled Sunday Masses.

But Mark Dupont, a spokesman for the Diocese of Springfield, Mass., said Sunday afternoon that Mass attendance may have been “a little off,” particularly with older parishioners staying home, but that there were not a big wave of cancellations. One parish, he said, even added a Mass later on Sunday afternoon, to afford parishioners who were digging out Sunday morning a chance to get to Mass that day.

The big concern in the diocese, he said, was the anticipated rain on Monday, which, added to several feet of snow, would be a stress on some roofs of churches, schools and other buildings, particularly flat roofs.

Brian Fraga, a reporter with the Herald News in Fall River, Mass., said he and his wife checked the Facebook page of their parish, St. Julie Billiart in North Dartmouth, Mass., to see if there would be a Sunday Mass. “They did a good job plowing their parking lot, and they even had a Saturday vigil Mass at 4,” he said. The roads leading to the church were also plowed, so the Fragas made it to the Sunday afternoon Mass. But there were only about 60 people in attendance—about 20% of what it normally is.

But if Catholics couldn’t make it to their local churches for Mass, many found alternatives at home. Molly O’Connor, a homemaker in New Haven, Conn., said that she and her family watched the televised Mass on EWTN and “enjoyed an excellent homily without distraction from children or congregation.”

Alex Kubik of Meriden, Conn., and his wife, Joy, and their two young daughters were to have attended a Byzantine Catholic church’s “Cheesefare Sunday” Divine Liturgy and “Forgiveness Vespers,” in anticipation of Lent. (Cheesefare Sunday is traditionally the last Sunday that Orthodox Christians and Eastern-rite Catholics eat dairy products until Easter.) Instead, Kubik said, the family planned to pray Forgiveness Vespers on their own that evening.

But, he admitted, it was difficult to observe Sunday rest “when you have to clear an emergency exit, remove the avalanche and ice dams from your roof and have to shovel a trench around your sill plate so you don’t get a flood in tomorrow’s rain.”

But, he added, he kept an appropriate Gospel passage in mind: “But he said to them: What man shall there be among you, that hath one sheep: and if the same fall into a pit on the Sabbath day, will he not take hold on it and lift it up?” (Matt. 12:11-12).