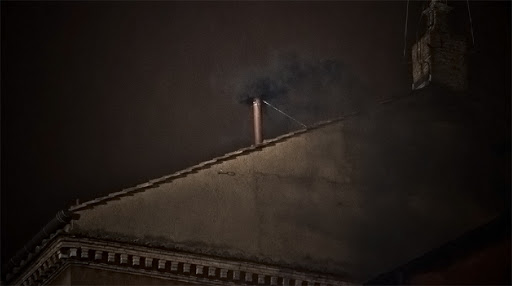 Rome, Italy, Mar 12, 2013 – Black smoke rose from the chimney atop the Vatican's Sistine Chapel at 7:42 p.m. local time on March 12, signaling that the College of Cardinals has not yet come to an agreement in electing the Church's new Pope.
Voting will continue on March 13, starting at approximately 9:30 a.m. local time. Four votes are held per day – two in the morning and two in the evening.
Smoke is sent up after the two morning votes – around noon – and then again after the afternoon set of votes – around 7:00 p.m.
However, if the first vote of either the morning or afternoon set results in the election of a new Pope, the smoke will be seen earlier.
In addition to casting their votes, the cardinals spend much of their day in prayer – including Mass and the Rosary – as they call upon the Holy Spirit to guide them in choosing the successor of Peter.