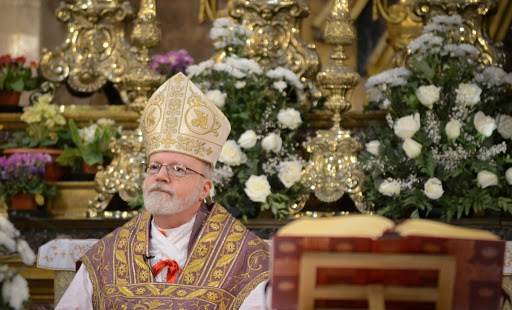 He laid aside his brown habit and sandals and donned a crimson red cassock and a cardinal’s berretta. Cardinal Seán Patrick O’Malley, Archbishop of Boston, celebrated the Solemn Mass of Lætare Sunday in the packed Church of Santa Maria della Vittoria on via XX Settembre – the cardinal’s titular church in Rome.
In an at times shaky Italian, the American archbishop reflected at length on the parable of the prodigal son. But first he began with a joke: “Beloved brothers and sisters, when I took possession of this beautiful church, I said to my Carmelite brothers in jest that I thought about bringing the statue of St. Teresa in Ecstasy back to Boston. They told me in reply that Napoleon already tried it. It would seem that they haven’t yet forgiven me my indiscretion, since the Father Superior wants to take this beautiful church away from me. But I promise you that after the conclave I will return still dressed as a cardinal. Maybe then I’ll take St. Teresa back to Boston with me!”
Laughter and applause resounded from the faithful, who turned out in large numbers to participate in what could very well be Cardinal O’Malley’s final Mass.
“You have what it takes to be Pope,” the parish priest said as he greeted the cardinal. “You are an amiable and affable pastor, humble yet decisive in acting, and you truly love the Church.”
“Perhaps the only handicap is that you are a friar, and a Capuchin that at!” he added jokingly. “Your Eminence,” the parish priest continued, “we hope with a truly fervent hope that this will be your last visit with us as Cardinal. But you have to promise us that, if our prayers are answered, your first visit outside the Apostolic Palace as Pope will be to your and to our Church.”
O’Malley shook his head, smiled and began his homily. “God is a good and merciful Father like no other,” he said, “a Father who welcomes us with open arms each and every time we decide to return to him. This is the meaning of the parable that the Church sets before us today. The parables of Jesus are extremely clear: the Father rejoices more over one lost sheep that has been found, than over ninety-nine that have never gone astray.”
He then insisted: “A person can leave the Father’s house – the Church – for a variety of reasons: ignorance, not feeling welcome, bad experiences, scandals, spiritual mediocrity. Oftentimes we see ourselves as being inside the Church even though we don’t truly live her life.”
“The consequence is a disordered life: a person goes from wanting it all to becoming a beggar, from loose living to feeding among swine,” O’Malley stressed, referring to the Gospel passage on the Prodigal Son (Luke 15:11-14). “We thus find ourselves standing before a Father who surprises us by his goodness, a great Father who loves us well beyond the bounds of our common way of thinking.”
He then said with reference to the conclave: “This Sunday is also special because today we are preparing for the Conclave scheduled to begin on Tuesday.”
“The Catholic world,” he said, “is united in prayer and is full of the trusting confidence that our faith gives us. Let us ask the Holy Spirit to enlighten the Church, in order that a new Pope might be chosen who will strengthen us in faith, and manifest the love of a good shepherd who goes in search for his lost sheep.”
O’Malley is the only Capuchin cardinal in the world. “The cardinal with the beard” – as his faithful fondly call him – was born in 1944 into a family of Irish descent in Lakewood, Ohio. He has led the Archdiocese of Boston since 2003.