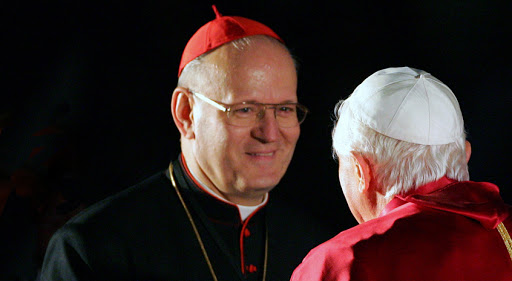 Why the Hungarian could be helpful with East-West ecumenism

Blessed Pope John Paul II spoke of a Church that “breathes with two lungs”: the Church of the West and the Church of the East. Could a Pope from Eastern Europe help to heal the great schism between Eastern Orthodoxy and Rome?
If that person also had strong relationships with the other European bishops and a high level of respect and admiration from the Church in the developing world, he could be the global leader we need as the next successor to Peter. Indeed, this challenge could very well be accepted by Péter Cardinal Erdő of Budapest in Hungary.
Cardinal Erdő is the eldest of six children. He studied at the seminaries of Esztergom and Budapest, and then went on to attend the Pontifical Lateran University, where he earned doctorates in theology and canon law. In addition to teaching at the seminary levels, he also studied at the University of California at Berkeley in the 1990s.
Cardinal Erdő has risen quickly. Prior to turning 50, he was elected to his first term as President of the Council of Episcopal Conferences of Europe, and was reelected in 2006 for five more years. In 2002 – at just fifty years of age – he was appointed to Hungary’s premier see, and made a Cardinal a year later. He was the youngest elector in the conclave that elected Benedict XVI. As a papal candidate, he is a comparably young (but not too young) at sixty years of age.
Despite all the talk of the Holy Spirit’s involvement in the conclave, it is precisely the Spirit who still has to do the math. John Allen, Vatican correspondent for the National Catholic Reporter, points out that despite the talk of a Pope from Africa or Latin America, “61 of the 115 cardinals who will file into the Sistine Chapel still hail from Europe, so discounting candidates from the Old Continent means ruling out half the talent pool a priori.”
The cardinals from the developing world may resist a Pope from Western Europe or North America, but an Eastern European candidate like Erdő might be an attractive option, being a European and yet outside the European mainstream. Coming from Hungary, Erdő represents a national Church with a long tradition of standing firm in the midst of persecution. His predecessor, Cardinal Mindszenty, famously stood up to the communists and endured torture and a life sentence in prison before escaping to live in the U.S. embassy in Vienna.
As President of the European bishops, Erdő has worked to build alliances with African bishops. He therefore knows them and they trust him. Part of his job is also to raise support for the Church in the developing world. This has also won him friends in Africa and Latin America, and confirmed his commitment to helping the poor.
An alliance of European cardinals and cardinals from third world countries could very well manage to elect a European pope with a national history of enduring persecution and with strong sympathies for the Church in the developing world.
Such a mixture could provide a papacy with an exciting new dynamic in which persecuted and neglected old (but emerging) Europe would hold hands with the young and emergent Church in Africa, Asia and Latin America. John Allen does the math and points out that “it will take 77 votes to get to a two-thirds majority in this conclave, and the Europeans and Africans together represent 72.”
Where would the other votes come from?  Hungary is where the Latin Church meets the Eastern Orthodox. Cardinal Erdő has reached out to the Eastern Churches and could provide the vital personal link to bring East and West together. As such, the cardinals of the Eastern sui iuris Churches might also see him as the natural choice. Already with strong support among the Europeans through his leadership of the European Bishops’ Conference, once the votes started to go his way, the Latin Americans and Asians might also jump on the bandwagon.
Erdő has a good track record in the Vatican, developing a relationship of trust and a reputation for holding the line doctrinally while doing so with a careful and pastoral style. He’s active in the New Evangelization, leading the way with urban missions in his own country and speaking well on the need for a new wave of missionary effort.
While he might build effective global relationships, he is not known as a particularly dynamic or charismatic leader. Does the Church need a “papal rock star” like Bl. John Paul II? Perhaps not; Benedict XVI was much loved and carried the crowds with a personal style that was the exact opposite to that of his immediate predecessor. We loved his gentle, bookish and grandfatherly kindness as we loved John Paul’s dynamism, courage and vigor.
Papa Erdő would focus our attention on neglected areas and neglected issues in the Church, and could very well bring the New Evangelization we need, combining the voices of Eastern and Western Europe with the strong, young voices of faith from the developing world.
Fr. Dwight Longenecker is parish priest of Our Lady of the Rosary Church in Greenville, South Carolina. Visit his blog, browse his books and be in touch at dwightlongenecker.com.