Could Malcolm Cardinal Ranjith be the next Pope? 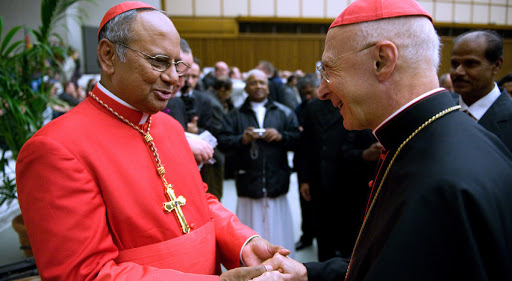 The papal election going on this week is genuinely one of the most wide-open elections in history. In 1978, Bl. Pope John Paul II broke the centuries-long Italian domination of the papal office, and the election of Benedict XVI in 2005 consolidated the precedent. Now, it is not unrealistic to imagine a Pope from Asia, Africa or the Americas.

Luis Antonio Cardinal Tagle from the Philippines is a charismatic and dynamic possibility, but he is young and inexperienced. The other, more seasoned candidate from Asia is
Cardinal Malcolm Ranjith of Sri Lanka. At 65, he is at the most promising age to be elected: neither so young that he is inexperienced, nor so old that his papacy would be short. Cardinal Ranjith has extensive work experience in the Vatican, strong academic accomplishment and a good track record as a reformer (albeit a reformer of a traditionalist hue).

Cardinal Ranjith is the eldest of fourteen children. He was born in the small Sri Lankan town of Polgahawela in 1947. He earned an undergraduate degree in Theology from the Urbanian, a Licentiate from the
Pontifical Biblical Institute and did further studies at the
Hebrew University in Jerusalem.

Bl. John Paul II appointed him Auxiliary Bishop of Colombo in 1991, and he organized the Pontiff’s visit to Sri Lanka in 1995. In 2001, Ranjith moved to Rome to work in the
Congregation for the Evangelization of Peoples, an opportunity that allowed him to develop a wide network within the developing world. He spent time in the Vatican diplomatic service as Apostolic Nuncio to Indonesia and East Timor, after which Pope Benedict XVI called him back to Rome to work in the
Congregation for Divine Worship. Four years later, he was appointed Archbishop of Colombo.

Like the other Cardinals from the developing world, Pope Ranjith would shift our attention away from the obsessions of the materialistic West and remind us of the priorities of the poor in the developing world. Cardinal Ranjith has said “Love for the liturgy and love for the poor, two true and proper treasures of the Church, one might say, have been the compass of my life.”
Cardinal Ranjith is known for being a ‘Ratzingerian’. Like Ratzinger, he has been involved in the defense of the faith when it has been challenged by dissenting Catholic theologians, but he is also like Benedict XVI in that he shares Benedict XVI’s desire to establish continuity with the canon of liturgical tradition. As Archbishop of Colombo, Ranjith has promoted the act of receiving Communion on the tongue while kneeling. He is sympathetic to a wider celebration of the
Extraordinary Form of the Roman Rite, and is intent on ridding the Church of the liturgical abuses that followed the sloppy interpretation of the
Second Vatican Council.

Cardinal Ranjith has wide and deep experience of how the Vatican operates, speaks ten languages and is fluent in Italian and English. Cardinal Ranjith would be perceived as a liturgical hardliner, but with his love for the poor and his background in the developing world, he would bring a unique blend of Catholic tradition with a drive to expand Catholic social teaching in the world.

He has strong a strong theological education, and solid experience running a diocese and being a pastor. He would not be as charismatic and may not be the dynamic world evangelist some people are looking for, but he would be prove to be a solid, competent Pope, bringing together his administrative abilities, high liturgical standards and a pastoral gift in ministering and encouraging ministry to the poor.

The conclave taking place this week is open to a wide range of candidates, each of which possesses an astounding level of competence, gifts, experience and background. Cardinal Ranjith is a prime example of the sort of Cardinals who are at the top of the papabili list. They are men with high levels of academic accomplishment, a contact book of global dimensions, abilities across a wide range of disciplines, fluency in several languages and each with a marvelously unique background and personal story.

In Cardinal Ranjith, the Church would receive a Universal Pastor who would continue the legacy of Benedict XVI, but would do so from the foundation of his life in the developing world, thus bringing three prime concerns of the Catholic Church to the forefront: the liturgy, the global mission of the Gospel and the Church’s ministry to the poor.

Fr. Dwight Longenecker is parish priest of Our Lady of the Rosary Church in Greenville, South Carolina. Visit his popular blog, browse his books and be in touch at dwightlongenecker.com.