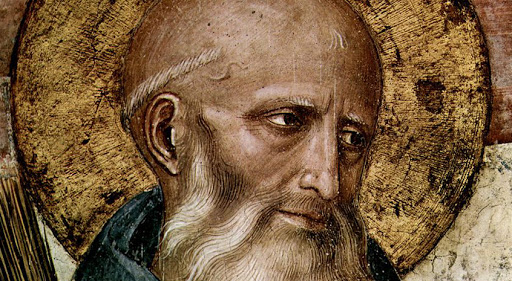 When Joseph Ratzinger stepped onto the world stage as Pope Benedict XVI and not as Pope John Paul III, he was making a powerful statement about himself as a person and the character of his papacy.
Comparisons were made to his last predecessor who bore the name of Benedict – the slight and short-lived
Giacomo della Chiesa. Indeed, Ratzinger nodded to Benedict XV in his first general audience in April 2005 by saying, “Filled with sentiments of awe and thanksgiving, I wish to speak of why I chose the name Benedict. Firstly, I remember Pope Benedict XV, that courageous prophet of peace, who guided the Church through turbulent times of war. In his footsteps, I place my ministry in the service of reconciliation and harmony between peoples.” He then went on to explain that he also wished to evoke the spirit of St. Benedict, the Patron of Europe.
What light, then, does St. Benedict shed on Pope Benedict? First, we should consider the context of St. Benedict’s life. By the end of the fifth century, the great Roman Empire was in tatters: the armies had been drawn back from the far reaches of the Empire, the capital had shifted to Constantinople, and Rome itself was crumbling into decadence and decay. The civilization was disintegrating into bankruptcy, anarchy, apathy, internal violence, and invasion by the barbarians. St. Benedict’s response was to retire with a group of men to live a secluded life of work, prayer and study.
Benedict’s small core communities thrived. The ancient learning was preserved. The life of prayer and hope was nurtured. The seeds of faith planted in the hard ground of monasticism soon burgeoned into a network of vital communities where men and women (Benedict’s sister,
Scholastica, established women’s communities) lived together in faith, hope, and charity. As the Roman Empire moved East and the Western Empire continued to disintegrate, Benedict’s communities became centers of safety, faith, and learning. Without trying, they became the beacon and hope for a new beginning. Eventually, they became the wellspring of the renaissance of European civilization we see as medieval Christendom.
Pope Benedict spoke frequently about his vision that the future Church would be smaller, leaner, and more committed. He understood and supported the new ecclesial movements in Europe like Communion and Liberation, Focolare, St. Egidio, L’Arche, and many others. Realizing that the “old Catholicism” of establishment in Europe was already gone, he saw the future not simply in a renewal of monasticism, but a new communal life that rose, like the phoenix, from the ashes of the old.
St. Benedict developed a monastic life that was rooted in the past. His rule is imbued with the words of Sacred Scripture on every page, and he drew his inspiration from the already existing traditions of monasticism:
St. Basil and
St. John Cassian in the East and
St. Antony of Egypt and the
Desert Fathers. St. Benedict understood that the present must be rooted in the past for the future to grow with strength and beauty. Likewise, Pope Benedict gave us the idea of the “hermeneutic of continuity” – his adoption of older forms of dress, his re-introduction of forgotten traditions in the liturgy, his treasuring the older customs of the Church, and his brilliance as a Biblical scholar all have meaning beyond the superficial reading that he was a ‘conservative’. To be a conservative means to conserve what is valuable from the past, not for its own sake, but because it is the capital on which one invests in the future.
St. Benedict speaks to us from an age when the Church of the East was undivided from the Western Church. As an Italian, at a time when the Roman Empire was centered in Constantinople, Benedict was a man of both the Eastern and Western Church. Influenced by Eastern monasticism, and looking East, St. Benedict lived in a Church that “breathed with both lungs”.