Could Antonio Cardinal Cañizares be the next Pope? 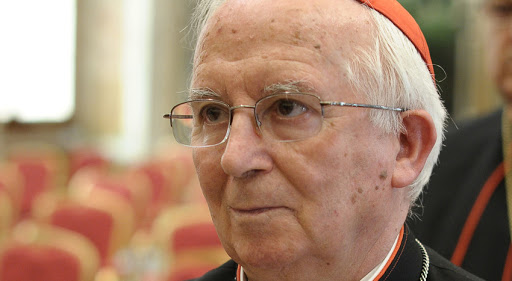 Friends call him the “Little Ratzinger”

Secular observers of the papacy often complain that the pope is too conservative. What they don’t understand is that one of the pope’s main job descriptions is to be a ‘conservative’. In other words, his job is to define, defend and ‘conserve’ the Catholic faith.
This conservative role functions as a check and balance within the Church so that the Pope, as the final arbiter, will always err on the side of caution and go with the established tradition of the Church rather than an innovation. With this in mind, one of the foremost candidates for the white cassock this time would be the Spaniard, Antonio Cardinal Cañizares Llovera.
At age 67, Cardinal Cañizares has led the Congregation for Divine Worship since December 2008. Before that, he was Archbishop of Toledo and Primate of Spain. Cañizares has the nickname “Little Ratzinger” because earlier in his career, he served as the head of the doctrine committee in Spain at a time when there were significant challenges to the faith from radical theologians. He also served with Joseph Ratzinger in the Congregation for the Doctrine of the Faith, and is known to share Ratzinger’s “reform of the reform” ideas in liturgy.
Cardinal Cañizares was born in Valencia and studied theology at the Pontifical University of Salamanca. He became a priest in 1970, and taught theology in various institutions focusing on techniques for teaching the faith.
A genuine teacher and academic, Cañizares was appointed as Bishop of Ávila, where he founded a Catholic university, and then moved to become Archbishop of Granada and soon began working with Ratzinger at the Congregation for the Doctrine of the Faith in the Vatican. As Pope Benedict XVI, Ratzinger made him a Cardinal in the Consistory of 2006. Two years later, Pope Benedict called him to Rome to head up the Congregation for Divine Worship and the Discipline of the Sacraments.
What would a Cañizares papacy look like? Among other elements, we would see a continuation of Benedict XVI’s liturgical “reform of the reform.” Along with Cardinal Ranjith, Cardinal Cañizares has criticized reception of communion on the hand and prefers kneeling to promote greater reverence for the Sacrament. Also, like Ranjith, he is an advocate of a wider celebration of the Extraordinary Form of the Roman Rite, which he has been known to celebrate.
Lest he sound too much like a hardliner, friends point out that he is also called “Little Ratzinger” because of his slight stature. Like Ratzinger, he is softly spoken, gentle and pastoral in his approach.
He also has an interest in the arts, having established a council to promote excellence and a preservation of tradition in the area of sacred art, architecture and music, and he works to encourage the “proper” celebration of the Ordinary Form of the Roman Rite: with great reverence and beauty. What we would have in a Cañizares papacy is continuity and consistency with what Benedict has started.
Could Cañizares be the global leader the Church needs? He lacks any other language than Spanish, and he is not known for being a dynamic evangelist and leader. At 67, is he really the right age, and do we really need another quiet, bookish and gentle pope? Benedict XVI did a great job, but there were problems with his papacy that were the shadow side of his strengths. It may be that the Cardinals will turn away from Cañizares as they look for a fresh face and a new direction.
On the other hand, Cañizares stood up strongly when Spain’s government became radically secularist and began to attack the Church. Perhaps this gentle scholar has more backbone than people think. He could combine conservative liturgical views with an agenda which made the Church a subversive force within a secular and increasingly atheistic Europe.
On the other hand, because the papal election is wide open, this may be the opportunity for the Cardinals to select one among their number who combines the strengths of Cañizares with some surprising gifts and background from a totally unknown Cardinal giving us another “Pope from a far country.”

Fr. Dwight Longenecker is parish priest of Our Lady of the Rosary Church in Greenville, South Carolina. Visit his blog, browse his books and be in touch at dwightlongenecker.com.