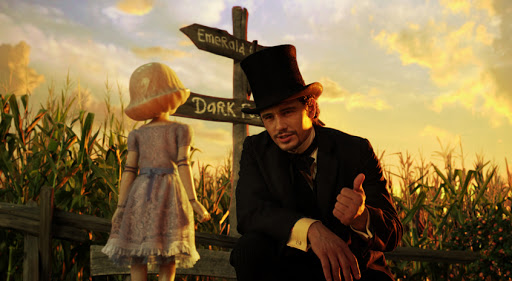 Oz is a 3D movie actually worth seeing in 3D

It’s rare when you can pinpoint the exact moment in a movie where you realize you’re really going to like it, but that’s what happened for me about fifteen minutes into Oz, the Great and Powerful. That’s not to say there’s anything wrong with the movie up to that point, mind you, because the fun starts almost immediately with the cheerful animated opening credits. And if you’re at all familiar with the classic 1939 film version of The Wizard of Oz, then you can’t help but smile throughout the new movie’s black and white prologue which parallels its predecessor perfectly, from how it introduces characters whose faces (or at least voices) will show up again over the rainbow, all the way down to using the same aspect ratio for the movie screen. But it’s near the end of that opening sequence, when the hot air balloon carrying the magic-making conman, Oscar Diggs (perhaps better known by his stage name of “Oz, the Great and Powerful”), gets whisked into the stratosphere by a tornado that the movie actually won my heart. That’s when director Sam Raimi decided to start throwing stuff off the screen.

Now you would think with the proliferation of 3-D movies flooding cinemas these days, such a thing wouldn’t be a big deal. In reality, most modern films have either been converted to 3-D in order to garner higher ticket prices or the director has made the artistic decision to utilize the process solely for enhanced depth perception. But Raimi knows better; he understands that when you put on those glasses, you want stuff shooting out of the screen and making you duck, be it a stream of water spraying on you from the mouth of a playful pixie or a gnarled claw grasping at you from behind a desk. He never overdoes the technique, pulling it out only for the proper moments, but the fact that Raimi uses 3-D in the way that has made audiences laugh and shriek since the 1950s lets you know first and foremost that he wants his movie to entertain you. So when those shafts of storm tossed timber started poking through the balloon’s basket towards my face, I settled back in my seat content with the knowledge that Oz and I were going to get along together just fine.

There’s much more to the movie than just a few good parlor tricks, though. Taking its cue from the technicolor palette of the 1939 film, Oz is probably one of the most color-rich films to hit screens since Finding Nemo. While pre-release images suggested the visuals of Raimi’s Oz might resemble those of Tim Burton’s Alice In Wonderland, nothing could be further from the truth. In fact, I would imagine if the gothic Burton wandered too close to the dazzling primary colors of Oz, he would begin to shrivel up and have to hurriedly scamper back to the darkness he adores. Even for those who might find the narrative in Oz lacking, they’re bound to concede that the eye candy is there in abundance.

Speaking of that narrative, if the movie is going to have its naysayers (and, of course, it will), then the criticism will probably center around the story. After the prologue in which the fame-obsessed Oscar pulls one con job too many and must escape in a hot air balloon, he finds himself in the land of Oz, where he is quickly mistaken by the witch Theodora for the wizard, whom it has been prophesied would appear and become King. Taking advantage of this unexpected shortcut to the greatness he seeks, Oscar accompanies Theodora to the Emerald City, but before he can take the throne, he is informed by Theodora’s sister, Evanora (also a witch), that in order to become King, he must first fulfill the prophesy by finding and killing the wicked witch who threatens Oz. Frightened, yet unwilling to give up the potential for wealth and acclaim, Oscar reluctantly accepts the mission and takes to the yellow brick road, where he manages to pick up some companions in the form of a flying monkey named Finley and a doll-sized girl made of china (whom he finds in Chinatown naturally). One evening, when the three locate the hiding place of the woman they’ve been searching for, the plot takes an unexpected turn, and it becomes unclear just who is a good witch and who is a bad witch. Can Oscar figure out the right side to fight on? And even if he does, what can a self-centered phony wizard possibly do to save the land of Oz from the powerful dark magic threatening it?

Well, if you don’t know the answers to those questions, then congratulations, dear reader: you are one of the few human beings walking the planet earth who has no knowledge of the events in the 1939 Wizard of Oz. The potential story problem for Oz, the Great and Powerful is that, much like the Star Wars prequels, it is so slavishly devoted to the predetermined future events depicted in the earlier film that there is zero suspense as to the fates of any of the characters or how situations will resolve themselves. The plot points are so obvious that at the screening I attended, during an early scene featuring Theodora and Evanora fretting over what Oscar might discover when he reaches the third witch, the little boy of 8 or 9 sitting in front of me yelled out, “I know what’s going to happen!” And the rest of the audience laughed because, of course, we all did.

But despite that, Oz has a couple of things going for it that stops it from becoming another Phantom Menace. For one, there is no Jar Jar or his equivalent, but Finley, the flying monkey, is quite likable (I really mean that, Mr. Raimi – thank you!). More important, however, is that Raimi is as aware of the limitations inherent in his story as the audience is, and as a result, he concentrates on doing something the Star Wars prequels tried to, but didn’t quite manage to successfully pull off. Since we all know how the story ends and therefore can pretty much guess what needs to happen in order to get there (if you haven’t figured out the identity of the third witch by now, you’re not really trying), Raimi doesn’t make the big events his central focus; instead, he concentrates on his main character and the interior journey he takes from being the person he is at the beginning of Oz, the Great and Powerful to the person we know he’ll become by the time we meet him in The Wizard of Oz.

And given the times we live in, it’s not a bad journey to watch unfold. Oscar starts out as a manipulative liar willing to do anything – even turn his back on the woman he so obviously loves – in order to achieve greatness. The problem is that Oscar perceives greatness to be an amalgamation of wealth and public acclaim, a worldview only too recognizable to modern audiences besieged by hundreds of reality shows where otherwise normal people agree to do just about anything for fifteen minutes of fame. So obsessed is Oscar with this goal, that when faced with death in the clutches of the tornado, he cries out to God, begging not simply to be allowed to live, but rather for one more opportunity to prove that he can be a great man. But as Oscar must learn over the course of the movie, if you’re going to call out to the author of the Beatitudes, then you might just find out he has his own notions about what constitutes greatness. (And it’s a journey of growth Oscar doesn’t complete without making a few mistakes, one of which has lasting consequences.) In a scene straight out of Sunday school (or whatever day you went to religious ed. classes on), as a direct result of Oscar’s lies, one character bites into an apple and has her soul corrupted. So even when Oscar finally reaches the end of his journey, it’s not without regrets, and he finds it hard to cheer along with the other citizens of Oz. It’s a wonderfully adult moment in a movie primarily aimed at kids, and it shows that Raimi’s movie practices what it preaches. Much like its title character, Oz, the Great and Powerful realizes that it’s not enough to be great in a bunch of flashy ways; rather, it’s much better to have a good heart.