Reactions to the new Pope from around the world 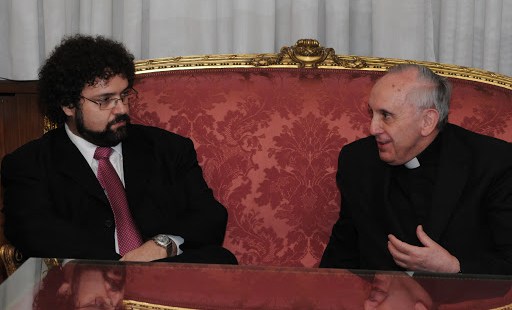 New comments will be added as they are received

"We members of the World Union of Catholic Women Organizations (WUCWO) wish to express our  joy for  the election of Cardinal Jorge Mario Bergoglio as Pope Francis, Bishop of Rome and Pastor of the Catholic Church.

"May the highlights of his  simplicity, humility and sensitivity for the poor radiate hope all along his  pontificate. We believe this will serve to increase the Faith of all Christians and we assure our commitment for evangelization and the building of the civilization of love with a special attention to women who live in a state of poverty and exploitation.
"We ask God to give him light and force to carry on his mission."

Society of Jesus in Madrid, Spain

The Spanish Jesuit Jesús María Alemany was a companion of Pope Francis I in Alcalá de Henares when José María Bergoglio did his Third Probation (the Jesuit tertianship) in our Alcala house. Approximately fifteen years after having joined the company, all Jesuits undergo one final test: the third probation. It is a similar experience to the novitiate and lasts approximately 6 to 9 months. This period of time fosters a deep encounter with the Lord and renews the person's call to live and die in the Company, serving the Lord at the service of others. In this test, the Company will evaluate, for the last time, the person's suitability to be definitely admitted to the order. More information at www.jesuitas.es.
He tells us his memories: "I did the third probation with him the last trimester of 1970. It was during 1970-1971 academic year. Our instructor was Fr José Arroyo SJ. We were about 30 Jesuits doing the month of exercises. We took some time to deepen our knowledge of Ignatian spirituality, recall the keys of the Society of Jesus…" He recalls from that time that "He was shy, close, simple, friendly, very austere, a very good companion, very easy to talk to. He did not stand out and was very spiritual… I remember we went on excursions together. I think it was after the third probation that he received his first assignment, which was to be the novice master of his province, and the second was to be Provincial of the Jesuits in Argentina." He adds, "I seem to remember that he had joined the Jesuits from the seminary. He had studied chemical engineering, and from there he entered the seminary and then joined the Jesuit novitiate." And finally, he remembers that "He was a big soccer fan" and repeats that "he stood out for his spiritual nature and for a deep spirituality and a remarkable simplicity. He was very firm in his convictions. I have not seen him since."
Other comments that have come from different Jesuit sources:
-He stands out for his social concern.
He is a man of simple and austere life. For example when he was ordained a cardinal, he told the faithful of his diocese not to spend money on the trip, and to use it instead for the poor.
-As an archbishop, he took a great interest in the young priests.
-He has alwasy been committed to freedom vis-a-vis the authorities.
-He has great concern for the spiritual.
-He is a leader.
He's a connoisseur of religious life and of the  Church.
-The name he chose may be a nod to the religious life in figures like St. Francis of Assisi and the Jesuits St. Francis Xavier and St. Francis Borgia.
-On our website you have the names of the six cardinals belonging to the Society of Jesus. Of these only two were voters but only Fr. Bergoglio went to Conclave (the other was an Indonesian Jesuit who could not attend for health reasons).

"We welcome with joy the new Pope. We look forward to receiving Pope Francisco here in Rio de Janeiro.

"He has visited Brazil in the past, participating in the Conference of Aparecida. He contributed much to the Aparecida Document, providing its soul.
"He spent the first World Youth Day in Argentina, and will now participate with us in Rio de Janeiro’s coming World Youth Day—a new journey for all of Latin America.
"By taking the name Francisco he has demonstrated the simplicity that the whole Church needs now. It’s a name that encompasses work, mission, evangelization, spirituality, and prayer. That's what young people need. We thank the Holy Spirit for this choice. "

"With joy in the Lord Jesus, we once again see that the gates of Hell cannot prevail over the Church. On this historic day filled with God’s Holy Spirit, by the Father’s infinite goodness, we have the gift of a new Supreme Pontiff.
"Jorge Mario Cardinal Bergoglio, who until now was Archbishop of Buenos Aires and Primate of Argentina, has come to the Chair of St. Peter to do that which he has always done in the eyes of God: serve his brethren.
"With wisdom and prudence – qualities which we know the new Pope possesses – he will guide the destiny of millions of Catholics who yearn for the voice of the Shepherd: the healing in his trials, the simplicity of his air, the humility and joyfulness of his service – to see the man of prayer.
"Surely, our beloved Pastor will continue the mission of the Savior: that of blessing, inspiring and  evangelizing every sheep that he finds along the way.
"It is a cause for joy to see and feel how the Spirit continues to enliven his Church. I rejoice for the world, I rejoice for our Latin America, and I rejoice for every man on this earth who has yet to discover God.
"We place our infinite trust in the Father’s grace in the arduous but joy-filled task that our beloved Pope Francis will be taking up. From the Pontifical Mission Works of Argentina, we implore God’s blessing; may the mission of our Holy Father serve to reflect the mission of the Savior."