Cardinal Dolan: Pope Francis returned by bus to the Domus Santa Marta with the cardinals. 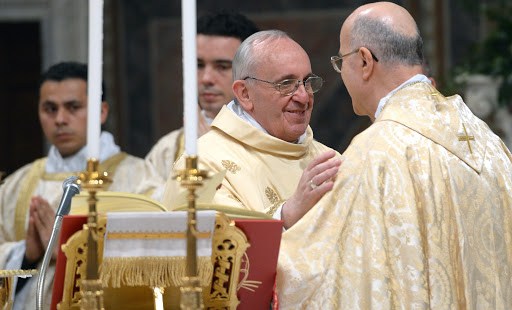 "He immediately told us that he chose the name of Francis, in honor of St. Francis of Assisi. Maybe he said it because he thought people might think it was for San Francis Xavier, so he quickly clarified the matter."
Cardinal Timothy Dolan, Archbishop of New York and one of the "papabili" favorites, spoke with reporters last night just after the conclave about the new Pope Francis. His remarks were picked up by CBS. We offer a small transcription made by Aleteia (original video can be seen at  ).
The choice "did not surprise us, because you have done your homework, and everyone knows how dedicated, loving and caring he is with his poor in Buenos Aires. And this is interesting also: apparently in Buenos Aires he takes the bus every day to go to work. And the same thing happened tonight. Did you hear what happened? "
"We were all gathered while he was on the balcony, waving to the people, in what is called the Hall of Blessings. We went down, as at other times when we went to the Sistine Chapel, and there are buses, 5 or 6 of them to bring the Cardinals back to the Domus Santa Marta. I did not know because when I was going, things went back to normal: you see there the Holy Father's car and the car guide and escort, security, motorcycles. And I thought, well, things have gone back to normal, the Pope's car has returned to service. And we took the buses and the cardinals waited outside to greet the Pope on his return to the Domus Santa Marta, where he has been living. And when the last bus arrived, guess who got off the bus?  Pope Francis, so I imagine he told the driver, 'Don't worry, I'm going with the boys on the bus.'"
According to Cardinal Dolan, the new pope "is a wonderful man of great simplicity. He told us that night that he intended to visit the Basilica of Saint Mary Major to greet Mary, the Mother of Jesus, the helper of the Roman people. He wanted to go greet his predecessor Benedict XVI, and then he had to go to the House of the Clergy and gather his things and pay the bill. That is where he was staying, while we stayed at the American College. It apparently was where he was staying until the conclave."
"He is a man with his feet on the ground," said the American cardinal. "He told us tonight, 'I will sleep well and something tells me you will too.'"
Regarding bets on his election, smiling, he told reporters: "I'd like to tell you what I said to the press in NY: 'I told you so.' I never took it very seriously."