Will “Francis” suffice? The Pope’s First Day of Work 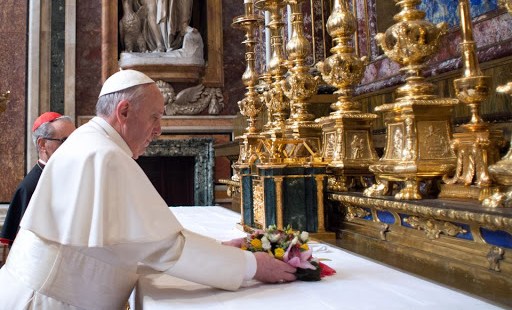 “Francis will suffice, since there are no others.”  At this morning’s press briefing, Vatican spokesman Federico Lombardi clarified by what name the newly elected Pontiff is to be called. “The next [Francis],” he pointed out, “will likely call himself Francis II, but there is no need for the newly elected Pope to add ‘the first’”.
Fr. Lombardi – a Jesuit like Pope Francis – seemed to have recovered from the initial “shock” he confessed on Tuesday evening, in a press briefing given immediately after Pope Francis made his first public appearance from the Loggia of the Vatican Basilica. In fielding questions from reporters, he did remark: “as a Jesuit, I am astonished, because we live out our service by subordinating ourselves to the Church’s authority rather than by governing”.
“For us, is it quite strange,” he added, “and we aren’t prepared for it psychologically. I interpret this election as a great call to service for the Universal Church, which our confrere has received”.
“We who are Jesuits accompany our brother in prayer, and we thank him for his generosity in accepting the responsibility of guiding the Church at this crucial time,” the Superior General of the Society of Jesus, Adolfo Nicolás, wrote in a statement published today. Nicolás added: “The name ‘Francis’, by which he shall be called from now on, evokes for us the Holy Father's evangelical spirit of closeness to the poor, his identification with simple people, and his commitment to the renewal of the Church. From the first moment he presented himself before the people of God, he offered a visible testimony of his simplicity, humility, pastoral experience and spiritual depth.”
Fr. Lombardi noted a few significant gestures that confirmed the simplicity of the newly elected Pope. On Wednesday evening, in the Sistine Chapel, the new Pope received the Cardinal’s act of homage standing before the altar, rather than seated on the papal throne. He presented himself for the “Urbi et Orbi” blessing simply dressed and without the mozzetta (the elbow-length cape worn by high-ranking prelates), and wearing the same simple pectoral cross he was always worn as bishop and Cardinal Archbishop.
When he returned to the Domus Santae Martae, rather than getting into the official papal car, license plate SCV n.1, he took the bus together with the other cardinals. And later that evening, after a very festive dinner, he said in jest to the Cardinal Fathers: “May God forgive you for what you have done!”
In similar fashion, on Thursday morning Pope Francis made a private visit to St. Mary Major without a motorcade and elaborate entourage to accompany him. Instead, he rode in one of the Gendarmerie's simpler cars.
“And if this leads to problems with security?” Fr. Lombardi was asked at the briefing. “Those responsible for the security of the Pontiff are at his service and have to adapt to his pastoral style.” He added, “John Paul II often broke with custom to meet people: it was his style, and it had to be taken into account”.
On Wednesday evening, Pope Francis telephoned Pope Emeritus Benedict XVI. At his first public appearance the same evening, he thanked Benedict XVI and asked the faithful from the Loggia of St. Peter’s to pray for him. “We do not expect him to go immediately to Castel Gandolfo,” Lombardi said. “He’ll go, but a visit isn’t imminent.”
On Thursday afternoon at 5:00 PM, the Pope will celebrate the Holy Mass with the Cardinal electors in the Sistine Chapel. This will be the occasion of his first homily, which presumably will be delivered in Italian, and improptu.
After the Mass, he will break the seals on the Vatican apartments in the Apostolic Palace where needed renovation work will begin. As the papal apartments are being prepared, the new Pontiff will continue to reside at Domus Santae Martae. This morning, after his visit to St. Mary Major, he stopped at the residence where he stayed before entering the Concalve, gathered his belongings, and paid his bill.
The coming days will be filled with commitments for the newly elected Pope:
On Friday, 15 March, at 11:00 AM he will meet with the College of Cardinals, electors and non-electors, in the Clementine Hall of the Apostolic Palace. As the Holy See Press Office spokesman noted, this will be a familial gathering, with the Pope personally greeting each of the cardinals.
On Saturday at 11:00 AM in the Paul VI Hall, the Pope will hold an audience with accredited journalists (permanent and temporary) and those who work in the media.
On Sunday, 17 March at 12:00 PM, he will recite the first Angelus of his papacy from the papal apartments overlooking St. Peter's Square.
On Tuesday, 19 March—the Feast of St. Joseph, patron of the Church—the Mass to inaugurate the new papacy will be held at 9:30 AM in St. Peter's Square. Fr. Lombardi confirmed that no tickets will be issued for that Mass. All who wish may attend.
On Wednesday, 20 March, he will hold an audience with fraternal delegates representing the heads of the various Eastern rite Churches who will be in Rome for the inaugural Mass.