From around the world to Rome for Francis 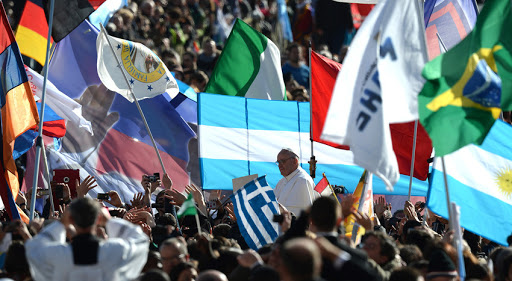 The beginning of the Petrine ministry of Pope Francis

In total, about 180 clergy are expected to concelebrate; 1200 priests and seminarians are expected to be present, and an uncalculated number of faithful are expected to fill St. Peter’s Square. These numbers give an idea of the anticipation in the air, the day before Pope Francis’ ministry officially begins. The inaugural Mass will be celebrated on 19 March, the Solemnity of St. Joseph, Patron of the Universal Church.

The Vatican spokesman clarified that the correct term for the celebration is “‘the inauguration of the Petrine ministry of the Bishop of Rome,’ i.e., the Solemn Mass inaugurating the Bishop of Rome’s service of the Universal Church.” Fr. Lombardi’s Spanish language assistant clarified further: “It is not an enthronement, since the Pope is not a king.”

The ministry is called “Petrine” because the Pope is the Successor of St. Peter. Tuesday’s celebration, in fact, “is tied to the very places where it unfolds: it begins at the tomb of St. Peter beneath the Basilica’s central altar and proceeds to the Piazza where, according to tradition, St. Peter, the first Pope, was martyred.”

This explains why the celebration is marked by very significant moments and acts.

The Pope will depart the Domus Sanctæ Marthæ around 8:45 AM. Travelling either by ‘Popemobile’ or Jeep, he will move through the crowds and greet the faithful gathered in St. Peter’s Square.

Having entered St. Peter’s Basilica, and once vested, Pope Francis will make his way from the sacristy next to Michelangelo’s Pietá to the tomb of St. Peter. There the Pope will venerate St. Peter’s tomb, together with the Patriarchs and Major Archbishops of the Eastern Catholic Churches (ten in number, four of whom are Cardinals). The Patriarchs and Archbishops of the Eastern Churches will also concelebrate the Holy Mass with Pope Francis.

The Fisherman’s Ring and Pallium – signs of the Petrine ministry that are placed in St. Peter’s tomb the night before – will then be taken by the deacons and Gospel bearer in procession. The Holy Father, together with the Patriarchs and Major Archbishops, will come back from the Confession to the main floor of the Basilica.

During the procession, the Laudes Regiæ will be chanted. During this litany, the intercession of a host of saints will be invoked, including a number of saintly Popes who followed after the Apostles. “The last of the Roman Pontiffs to be invoked,” Lombardi noted, “is St. Pius X.” He added that “only saints and not blesseds” will be included – an obvious reference to Blessed John Paul II.

Before the Eucharistic celebration begins, the Pope will receive the Pallium and the Fisherman’s Ring.

The Pallium used by Francis is the same one that Benedict XVI used. The Pallium is made of lamb and sheep’s wool, and is placed on the Pope’s shoulders to recall the Good Shepherd who carries the lost sheep on his shoulders. The Pope’s Pallium has five red crosses that recall Christ’s Passion (the same crosses are found in black on the Pallia received by Metropolitan Archbishops on the Solemnity of St. Peter).

The Pallium will be placed on the Pope’s shoulders by Cardinal Proto-deacon Tauran, the same Cardinal who announced the “Habemus Papam” from the loggia of St. Peter’s Basilica last Wednesday evening.

Following the imposition of the Pallium, a prayer will be recited by the Proto-presbyter, Cardinal Daneels.

The Fisherman’s Ring – so called in memory of St. Peter’s profession prior to being called by Jesus – was chosen by Pope Francis from one of many options presented to him by the Papal Master of Ceremonies, Msgr. Guido Marini. It is made of gold-plated silver and bears the image of St. Peter with the keys. The ring was designed by Enrico Manrini, and dates back to the time of Paul VI. Msgr. Macchi, who served as a personal secretary to Paul VI, gave it to Msgr. Marini to present to the Pope.

After receiving the Pallium and the Ring, the last rite before the celebration is the Act of Homage and Obedience to the new Pope. The Act of Obedience will be made by six Cardinals, two representing each of the Orders (those of Bishops, Priests, and Deacons).

Representatives of the various members of the People of God will not be making this Act of Obedience tomorrow. It is expected that this will occur when the new Pontiff takes possession of the Basilica of St. John Lateran.

The homily will be delivered in Italian, and Lombardi told journalists to be ready for impromptu additions: “We have already experienced how the Pope loves to introduce variations into the text.”

Regarding other features of the celebration: for the sake of simplicity and time there will be no Offertory procession. Additionally, Holy Communion will not be distributed by the Holy Father but rather by the deacons, while 500 priests will be responsible for distributing Communion to the faithful present in St. Peter’s square.

The Mass is expected to last not more than two hours.

The singing has been entrusted to the Sistine Chapel Choir. During the Offertory, Pierluigi da Palestrina’s motet, Tu es pastor ovium (“You Are the Shepherd of the Sheep”) will be sung. Palestrina composed the motet specifically for a Pope's inauguration.

The Mass will conclude with the singing of the “Te Deum.” The verses will alternate between Gregorian chant and a melody by Tomás Luis de Victoria. There will be no Angelus after the Mass, as the inauguration is not taking place on a Sunday.

At the end of the celebration, and after removing his liturgical vestments, the Pope will go to the Basilica’s high altar. There, in front of the altar, he will greet the heads of the official delegations who participated in the celebration.