What does Joseph’s experience teach us about God’s plans? 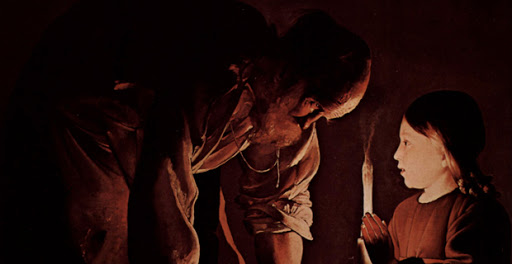 Though never in the spotlight, Joseph’s humble and freely chosen acceptance of God’s will brought forth great fruit.

The Lord always knew his plan for Joseph’s life; as such, we can have confidence that he has a plan for us.

God exists outside of space and time – after all, it is he who created them. Yet it is mind-boggling to consider that the Lord has always known what way of life he would call each of us to. Have you ever stopped to consider the beginning of the Gospels of Matthew and Luke, which list the ancestry of Jesus? The genealogy given there is Joseph’s lineage, not Mary’s. In the Gospel of Matthew, after about fourteen lines of genealogy beginning with a line that says “Abraham became the father of Isaac,” it is written, “Eleazar became the father of Matthan, Matthan the father of Jacob, Jacob the father of Joseph, the husband of Mary. Of her was born Jesus who is called the Messiah” (Matthew 1). Looking through this genealogy of significant Biblical figures from whom Christ descended through Joseph, it is clear that even as the Lord told Abraham that his descendants would be as numerous as the stars, the Lord knew that he would ask Joseph to protect Jesus Christ as his foster father.

In his recent book on the infancy of Jesus, Pope Benedict XVI writes that Jesus “does not originate from any man, but is a new creation, conceived by the Holy Spirit. The genealogy is still important: Joseph is the legal father of Jesus.  Through him, Jesus belongs by law, “legally,” to the house of David. And yet he comes from elsewhere, “from above” – from God himself” (Jesus of Nazareth: the Infancy Narratives, pg. 7). In his plan for salvation, God the Father intended for a human person, Joseph, to be the earthly father of Jesus Christ.

At first glance, Joseph’s story is not one that any of us would dream of making our own: his fiancée becomes pregnant with someone else’s child and he marries her anyway, despite the derision sure to come from his neighbors. At the time of the census, he cares for his pregnant wife on a long journey, only to be turned away from every inn and to have his stepchild be born in a stable. He never had relations with his wife or had any children of his own. He had to flee to Egypt, away from everything he knew, to keep his family safe from the murderous King Herod. We don’t even know how he died. It sounds like poor St. Joseph got the short end of the stick.

When we take another look at the role he played in salvation history, however, it is clear that God’s plans are bigger than anything he could have ever desired.  Joseph married the perfect woman; she never sinned. He didn’t have his own biological child, but he was the legal parent to the Savior, Jesus Christ. He may not have always lived in the same place, but his job had more enduring effects than any successful carpentry business: he protected, taught and raised the Son of God.  Two millennia later, people around the world pray to St. Joseph.  Men ask that they might be holy fathers like him, that they might provide and defend their families. Women pray that St. Joseph might intercede for their spouses, sons or brothers. Joseph did not experience glory during his earthly life, but the reward of the just awaited him in Heaven.

Like all men, Joseph was given free will – he did not have to follow God's plan for his life.

Imagine the decision that Joseph had to make when he heard in a dream, “‘Joseph, son of David, do not fear to take Mary your wife, for that which is conceived in her is of the Holy Spirit; she will bear a son, and you shall call his name Jesus, for he will save his people from their sins’” (Mt 1:20-21). This was God's plan for Joseph, but Joseph could have rejected Mary and divorced her quietly, as he had previously intended on doing.

Blessed Pope John Paul II tells us that Joseph is a model for all of us in “holy obedience.” In his apostolic exhortation Redemptoris Custos, he writes, “‘When Joseph woke from sleep, he did as the angel of the Lord commanded him and took Mary as his wife” (cf. Mt 1:24). He took her in all the mystery of her motherhood. He took her together with the Son who had come into the world by the power of the Holy Spirit. In this way he showed a readiness of will like Mary's with regard to what God asked of him through the angel…What he did is the clearest “obedience of faith” (cf. Rom 1:5; 16:26; 2 Cor 10:5-6).

This freely chosen obedience to conform to God's will is particularly marked by Joseph's humility and readiness to simply do the work to which he had been called. Blessed John Paul II remarks, “[A]t the moment of Joseph's own ‘annunciation’ he said nothing; instead he simply ‘did as the angel of the Lord commanded him’ (Mt 1:24). And this first ‘doing’ became the beginning of ‘Joseph's way.’ The Gospels do not record any word ever spoken by Joseph along that way.” It is for this reason that St. Joseph is the patron saint of workers – he commits himself to the work of the Lord in a simple, direct way, fully obedient and full of faith.

Ven. Pope Paul VI wrote, “he is the proof that in order to be a good and genuine follower of Christ, there is no need of great things – it is enough to have the common, simple and human virtues, but they need to be true and authentic” (Discourse, March 19, 1969: Insegnamenti, VII [1969], p. 1268).

God the Father entrusted the mystery of the Incarnation to Joseph's protection and care. As Christians, each of us is called to this same guardianship.

For someone who, in the eyes of the world, was merely a small town carpenter, Joseph had the incredible calling of guarding the Christ Child, the Incarnate Son of God. Blessed John Paul II writes, “Together with Mary, Joseph is the first guardian of this divine mystery. Together with Mary, and in relation to Mary, he shares in this final phase of God's self-revelation in Christ and he does so from the very beginning.” Joseph is not only a witness to Christ's birth and childhood; he is the protector of God's plan of salvation coming to fruition.

Joseph's life is a reminder to each one of us that we are called to protect the mysteries of the faith. This is a responsibility that we all have, regardless of our particular vocations. The Catechism teaches that we are required “to nourish and protect our faith with prudence and vigilance, and reject everything that is opposed to it” (Catechism, 2088).

Joseph's life, his diligent devotion to Christ and to the Lord's call, is a shining example of the way that God's plan works in our lives. Each one of us is part of God's greater plan for mankind (to know, love and serve him), and our humble obedience to that plan will bring us true happiness and sanctification.