Do Catholics and Protestants still disagree on whether a person is saved by ‘faith alone’? 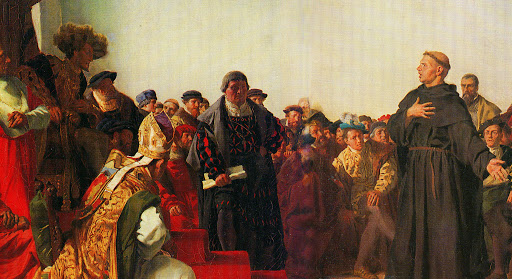 It all depends on what exactly is meant by ‘faith alone’

A great division erupted in the 16th century between Catholics and Protestants over the doctrine of justification, or how the human person attains salvation. Martin Luther, a leader of the Protestant Reformation, claimed that faith alone – sola fide – is enough to save man, and that works do not affect his salvation. To support this claim, he referred largely to the writings of St. Paul, who seemed to him to emphasize faith above works. St. Paul wrote that "we hold that a man is justified by faith apart from works of the law,” and Luther translated this phrase as “justified by faith alone.” The Council of Trent rejected this understanding of “faith alone” with some forceful proclamations amounting to a clarification of Catholic doctrine: faith without works is indeed dead (Session 6, Canon 9). This has been a central sticking point between Catholics and Protestants ever since, and discussions between the two sides often go nowhere.


Do the same divisions still exist?

The Council of Trent denounced the doctrine that faith as intellectual assent alone justifies man, and rightly so, for this was the prevailing Protestant error of the time.  But is this the understanding of “faith alone” that most Protestants still have today? Is there any way to interpret Luther’s doctrine of “faith alone” which brings it into agreement with Catholic teaching? Pope Benedict XVI showed that there is, when he addressed the doctrine of justification at two of his general Wednesday audiences in November of 2008.

In fact, these addresses followed a joint commission not long before between the German Conference of Catholic Bishops and the bishops of the Lutheran Church in Germany, in which Pope Benedict (then Cardinal Ratzinger) acted as the Catholic head. This commission wrote, significantly, that “[t]oday, the difference about our interpretation of faith is no longer a reason for mutual condemnation… even though in the Reformation period it was seen as a profound antithesis of ultimate and decisive force. By this we mean the confrontation between the formulas by faith alone, on the one hand, and faith, hope and love, on the other” (The Condemnations of the Reformation Era: Do They Still Divide?).

Pope Benedict explains, though, that it is necessary to understand what St. Paul means when he refers to “the law.” The “works of the law” which St. Paul writes about “meant the Torah in its totality, that is, the five books of Moses. The Torah, in the Pharisaic interpretation, that which Paul had studied and made his own, was a complex set of conduct codes that ranged from the ethical nucleus to observances of rites and worship and that essentially determined the identity of the just person. In particular, these included circumcision, observances concerning pure food and ritual purity in general, the rules regarding the observance of the Sabbath, etc. codes of conduct that also appear frequently in the debates between Jesus and his contemporaries.” Benedict explains that these observances acted as a sort of “wall of distinction” against the powerful Hellenistic culture in which the Jewish people lived, a wall which was necessary in order for them to preserve their identity as a people.

Before his conversion, St. Paul persecuted Christians because he saw their freedom as a danger to this wall. But “at the moment of his encounter with the Risen One, he understood that with Christ's Resurrection the situation had changed radically. With Christ, the God of Israel, the one true God, became the God of all peoples. The wall as he says in his Letter to the Ephesians between Israel and the Gentiles, was no longer necessary: it is Christ who protects us from polytheism and all of its deviations; it is Christ who unites us with and in the one God; it is Christ who guarantees our true identity within the diversity of cultures. The wall is no longer necessary; our common identity within the diversity of cultures is Christ, and it is he who makes us just.”

So, then, being just before God “simply means being with Christ and in Christ.” The observances of the Jews are no longer needed because man’s identity has become rooted not in a system but in a person.

It is at this point of his reflection that Benedict makes his most striking statement: “For this reason Luther's phrase: ‘faith alone’ is true, if it is not opposed to faith in charity, in love” (italics added).

“Faith is looking at Christ, entrusting oneself to Christ, being united to Christ, conformed to Christ, to his life. And the form, the life of Christ, is love; hence to believe is to conform to Christ and to enter into his love. So it is that in the Letter to the Galatians in which he primarily developed his teaching on justification St Paul speaks of faith that works through love (cf. Gal 5: 14).”

To believe is to enter into the love of Christ; this is what is meant by love being the form of faith. This relationship between faith and love shows us that true faith must, by necessity, involve love. St. Paul says: “In Christ Jesus neither circumcision nor uncircumcision counts for anything, but only faith working through love” (Galatians 5:6).

Where does this put us in regard to the doctrine of “faith alone”? If by this phrase, one is speaking of informed faith, or faith formed by charity, then it is totally acceptable to a Catholic.

Benedict helps us to understand that “the centrality of justification without works, the primary object of Paul’s preaching, does not clash with faith that works through love; indeed, it demands that our faith itself be expressed in a life in accordance with the Spirit… faith that is active in love testifies to the freely given gift of justification in Christ.”


How can this help to advance dialogue between Catholics and Protestants?

While at the time of the Reformation there were more Protestants who understood “faith alone” as intellectual assent alone, the debate over justification today often boils down to a problem of expression, or formula, as the document of the joint commission quoted earlier maintains. According to Jimmy Akin of Catholic Answers, many Protestants today do not believe in faith as intellectual assent alone, but hold the same understanding of faith working through love that Catholics do. Catholics and Protestants need to recognize that they may agree more than they think they do, and work at translating each other’s way of expression.

Confusion over this topic will most likely continue between Catholics and Protestants for a good while yet, but a close and thoughtful look at Pope Benedict’s way of approaching the debate, and his contribution to it, could catalyze unity between the two.