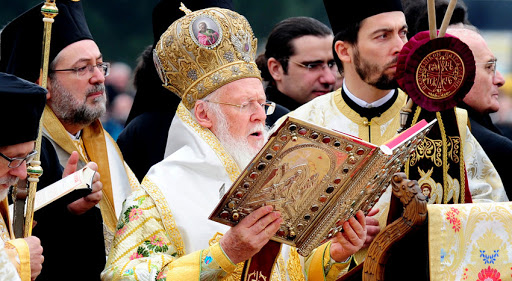 Ecumenical relations are as positive as ever

There have been several “firsts” since last Wednesday’s election of Cardinal Jorge Mario Bergoglio as Pope Francis. His installation Mass at the Vatican yesterday saw another – the participation of the Orthodox Ecumenical Patriarch, Archbishop Bartholomew I of Constantinople. Many Orthodox and Catholics are seeing a hopeful sign in Bartholomew’s presence, noting that the split between Rome and Constantinople led to a millennium of separation.

Though Bartholomew’s visit is significant, there are other aspects of Francis’s emerging papacy that are drawing the attention of Orthodox leaders, such as an apparent change in papal style.

“Everyone has been struck by his humility, from the taking of the name Francis to his personal lifestyle in Buenos Aires, his remarks on the papal balcony, when he asked the people to pray for him,” said Father Mark Arey, ecumenical officer of the Greek Orthodox Archdiocese of America. “It’s been a very impressive showing, a demonstration of his faith and humility.”

“I’ve been struck by the small gestures he’s made that indicate he’s going to change the shape of the papacy, if that’s possible, to be much more of the people, of the Church, trying to get the Church back to its basics of spreading the Gospel,” said Jack Figel, publisher of Eastern Christian Publications and Theosis, a new monthly devotional magazine for Eastern Christians. “His whole attitude toward the Church and the people strikes an Orthodox chord.”

Figel, a Byzantine Catholic who brings Orthodox and Catholics together to discuss ecumenical issues at twice-yearly Orientale Lumen conferences, also noted Francis’s first appearance after his election, using phrases such as “the Bishop of Rome” and “the Bishop and his people,” without mentioning being Bishop of the Universal Church, and his decision to take the bus back to the Domus Sanctæ Marthæ with his brother cardinals rather than taking a papal limousine.

“He lives and breathes the notion of conciliarity and being with his brother cardinals,” Figel said. “And when the cardinals gave their greeting of loyalty, he didn’t sit up on the white chair on the platform; he came down among them. Those are just small little hints the Orthodox have picked up on.”

“Clearly, he is open and affirming,” said Father Leonid Kishkovsky, director of External Affairs and Interchurch Relations of the Orthodox Church in America, who noted Francis’s simplicity and accessibility.

Indeed, in a congratulatory letter to Pope Francis on March 14, Archbishop Tikhon of Washington, Metropolitan of All America and Canada in the Orthodox Church in America, wrote, “Your example as Archbishop of Buenos Aires has told the world that your commitment is to the Gospel of Christ, its truth and its love. Your witness during your first steps as Pope confirms this commitment strongly and without reservation.”

Tikhon was among many Orthodox and Oriental Church leaders who attended yesterday’s Mass, along with Karekin II, Supreme Patriarch and Catholicos of all Armenians, and Metropolitan Hilarion of the Patriarchate of Moscow.

As part of his inaugural, the new Pope invited the Eastern rite Catholic Patriarchs and Major Archbishops to accompany him to the tomb of St. Peter to venerate the Prince of the Apostles.

It is the different interpretations of the Primacy of Peter that are keeping the Orthodox and Catholic Churches from full union.

“The early churches developed as a federation of local churches, each under a major hierarch, with its own polity,” said Jesuit Father Robert Taft, author of a multi-volume history of the Liturgy of St. John Chrysostom – the liturgy used in Byzantine Catholic and many Orthodox Churches. “That major hierarch was called an Archbishop or a Catholicos or a Pope or whatever, but they were all in communion, and then as a result of difficulties that are well known and were faced by the early councils, some of those people fell out of union with the other churches, and that’s why we have the problems of ecumenism. In other words, the challenge of seeking to bring the churches back into communion.”

“But the only way that’s going to happen is not by anybody swallowing everybody else – it doesn’t mean everybody’s got to become Catholic. It means we have to come to the point where we recognize each other as representatives of apostolic Christianity, [meaning] those churches of apostolic origin which have the valid priesthood, episcopate, all the sacraments, valid and adequate for the sanctification of their people. Thisis the new ‘sister churches’ ecclesiology that the Catholic Church recognizes in several documents from Vatican II on.”

“Pope John Paul II, in terms of statements and requests he made, was attempting to find a consensus with the Eastern Churches on the role of the Bishop of Rome,” noted Father Kishkovsky, a former President of the National Council of the Churches of Christ in the USA. “At one point he asked that question, hoping the Churches would answer: ‘What is the ministry of the Bishop of Rome,' as they see it, in a positive light? Not that many answers came forward. Father Richard Neuhaus challenged me that there’s no Orthodox response at any official level, and that was troubling to him. John Paul II did what he could. It didn’t gather speed.”

Nevertheless, the decision of Patriarch Bartholomew to attend the Pope’s inaugural Mass “is a sign of enormous respect for the Catholic Church and a real step forward, which will be an example to the other Orthodox,” said Father Taft, a Byzantine-rite priest, who in 2002 retired as a professor from Rome’s Pontifical Oriental Institute. He has known Archbishop Bartholomew since the 1960s, when the two were students at that institute.

“I think the Ecumenical Patriarch wants to encourage and bring more to the fore the good relations between the Orthodox and Catholic Churches and foster and encourage dialogue,” Father Arey added. Father Arey, who was secretary for six years of the North American Orthodox-Catholic Consultation, feels it’s significant that Bartholomew is bringing to Rome Metropolitan Tarasios of South America, an American who is based in Buenos Aires and who knows the Pope from his work there, and Metropolitan John of Pergamon, head on the Orthodox side of the international Orthodox-Catholic Theological Dialogue. It’s helpful that Pope Francis knows the Orthodox through Metropolitan Tarasios, said Figel, whom he describes as a “very friendly, open-minded down-to-earth American.”

“Given that he’s Western-born and more ecumenical than a lot of the other Greeks, Francis will have a very positive view of the Orthodox Church,” Figel said.

“the fact that they’re attending as well shows in a very positive way the way Orthodoxy feels right now, and has been feeling, about its dialogue with the Roman Catholic Church,” said Father Arey.

But what is also significant for many ecumenical-minded Orthodox is Pope Benedict XVI’s resignation. “That really struck many Orthodox very profoundly,” Father Arey said. “What really divides us is the nature of the Primacy of Peter, which we don’t debate – we Orthodox have a doctrine of the Primacy of Peter; it simply doesn’t correspond to what I would call a modern Vatican doctrine, since Vatican I. The fact that a Pope would resign, which is a very profound thing, inasmuch as you are truly the Vicar of Christ on earth with these privileges and prerogatives, almost powers – keys of the Kingdom – how do you set that down, and then how is it taken up by another? And it seems at least to many of us, and to me in particular, that Pope Benedict did something… quite remarkable in setting aside his office and showing that the office can be set aside, something most people might not have thought was possible.”

He believes there will be a good deal of theological reflection on the resignation and possibly an opening for the dialogue to “find new ways of understanding the history of the Primacy of Peter and a place for Orthodox Christians, Orthodox theologians, prelates like His All-Holiness – who is, at least among the Orthodox, the ‘first among equals’ in the episcopacy of the Orthodox Church – and allow them to find new ways of continuing the conversation and maybe reaching conclusions that everyone would like to get to,” said Father Arey. “It’s just a question of how we get to them.”