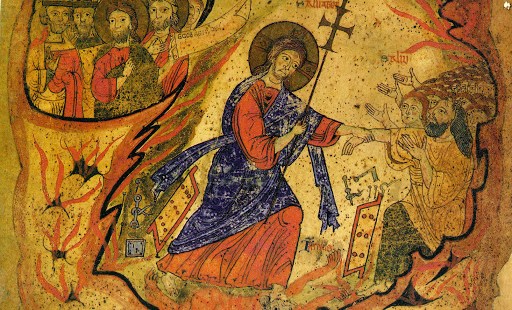 The cross answers evil in the Church and ourselves

Holy Saturday holds the key to how Christ reforms his Body, the Church. On a day when churches are empty (except some beautiful devotions to Our Lady of Sorrows) in preparation for the Easter Vigil, the Office of Readings recalls an event that we profess in the Apostles’ Creed: Christ’s descent into hell, what the medievals called the “harrowing of hell.” One of the readings (a must-read!) comes from an ancient, anonymous Holy Saturday homily.

It presents Christ bearing the cross into the nether regions, to wake up Adam and those who were asleep.  In a series of striking parallels, Jesus explains to Adam how his Passion’s purpose was to reform Adam (who represents all sinners) again into his image:
“[F]or you, who left a garden, I was handed over to Jews from a garden and crucified in a garden. Look at the spittle on my face, which I received because of you, in order to restore you to that first divine inbreathing at creation. See the blows on my cheeks, which I accepted in order to refashion your distorted form to my own image.”

Each insult, each blow that Christ endured hammered out a dent in his Mystical Body.  We often think of healing as a gentle art. But the modern parallel, collision repair, is anything but. If Christ’s body was so disfigured as not to seem human, as Isaiah foretold, how disfigured his image in us must be, that such extensive repair was needed!

There is much written these days about needed reforms in the Church. There is also much written lamenting the attacks against the Church by an increasingly emboldened secular culture.  Holy Saturday teaches that it is those very attacks that purify the Church, that reform the Church, that clear the dead wood and prune the fruit-bearing branches so that they can blossom somewhere else and spread the Gospel.

At last night’s Way of the Cross, Pope Francis spoke of the Cross of Christ as both God’s love and God’s judgment. It is judgment because by rejecting Christ we bring condemnation upon ourselves, but it is love because we are saved from condemnation by virtue of Christ’s Cross.

The Cross is God’s answer to evil.

The suffering of the Church (even when self-inflicted) is God’s preferred method of reform.

And what goes for the Church goes for our souls as well. Reforming the Church means being reformed ourselves.

Let us pray for reform in our Church and in ourselves.  Read that ancient homily, that wake-up call of Christ.

And perhaps we can be bold enough to pray for God to be as hard on us as He has to, to reform us, blow by blow. I know no better prayer for that than John Donne’s amazing Holy

Batter my heart, three-person’d God; for you
As yet but knock, breathe, shine, and seek to mend;
That I may rise, and stand, o’erthrow me, and bend
Your force, to break, blow, burn, and make me new.
I, like an usurp’d town, to another due,
Labour to admit you, but O, to no end.
Reason, your viceroy in me, me should defend,
But is captived, and proves weak or untrue.
Yet dearly I love you, and would be loved fain,
But am betroth’d unto your enemy;
Divorce me, untie, or break that knot again,
Take me to you, imprison me, for I,
Except you enthrall me, never shall be free,
Nor ever chaste, except you ravish me.

This article is reprinted by the author’s permission from The Gregorian Institute.