Why were Christ’s Passion and Resurrection necessary for the redemption of the world? 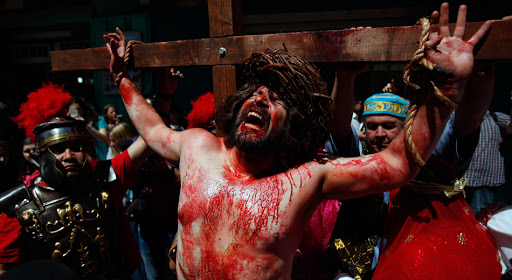 Because of the Fall of Adam and Eve, humans had become enemies of God

Jesus Christ suffered death and rose again from the dead to open the Gates of Heaven, which had shut tight against the sin of the world, first committed by Adam and Eve. The “wages of sin is death,” as St. Paul wrote. Because of our sin, we human persons were destined for eternal death unless the injustice against God was set right by a sufficiently great sacrifice.  But, as C. S. Lewis helpfully put it in his classic work, Mere Christianity, one drowning man cannot save another. “To what will you look for help if you will not look to that which is stronger than yourself?” Only God Himself was strong enough, or perfect enough to be this sacrifice. Jesus, the Word made flesh (John 1:14), was the only one capable of doing for us what we could not do for ourselves because of our reduced condition, which was to pay the price of sin: death. “Now since the children share in blood and flesh, he likewise shared in them, that through death he might destroy the one who has the power of death, that is, the devil, and free those who through fear of death had been subject to slavery all their life” (Hebrews 2:14-15.)

Jesus was under the same Law given by God to humanity (Gal 4:4), fulfilling perfectly the requirements of the Law. But because He is God, the sacrifice of Jesus is infinitely powerful and definitively conquers sin and death, undoing the offense against God and cleansing all human persons of their sins. This victory is manifested in His rising from the dead on the third day.