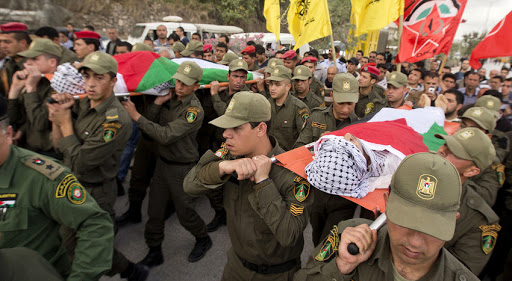 A rocket was launched from Gaza at Israel in retaliation

Thousands in the West Bank protested on Thursday the killings of two Palestinian protesters by Israeli troops. In retaliation, militants in Gaza launched a rocket at Israel, which landed in an unpopulated area. The NY Times has the story:
Thousands of Palestinians took to the streets in the West Bank in a show of outrage Thursday over the deaths of two Palestinian protesters killed in clashes with Israel and a third Palestinian who died of cancer in an Israeli prison. In Gaza, militants fired a rocket that landed in southern Israel, causing no casualties.

The unrest has raised tensions between Israel and the Palestinians after days of West Bank clashes and rocket fire into southern Israel, prompting the first Israeli airstrike in the Gaza Strip since a cease-fire was reached last November. Israel has vowed to respond harshly to further attacks from Gaza.