Women Have an Indispensable Role in the Church 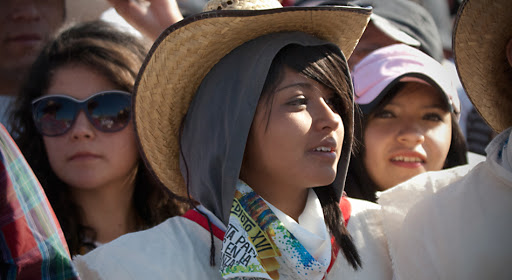 “The apostles and disciples found it harder to believe. The women did not.”

This was the thrust of Pope Francis’s Wednesday general audience, during which he recalled that women were the first witnesses of the Resurrection. “Women are moved by love and know how to welcome the announcement in faith,” the Pope stated. “They believe, and immediately transmit it; they do not hold onto it for themselves, they hand it on.” According to Pope Francis, this is the mission “of mothers, and of women: to give witness to their children, and to their grandchildren, that Jesus is alive, that he is the living one, that he is risen.” However, the Pope added that this also causes us to reflect on how “women, in the Church and along the journey of faith, have had and also today have a special role in opening doors to the Lord.”

Aleteia spoke about Pope Francis’s reflections with Comboni missionary Sister Eugenia Bonetti, who for years has advanced the struggle of women religious in Italy to combat the trafficking of women, and Maria Giovanna Ruggieri, President of the World Union of Catholic Women’s Organizations – a body that’s been in existence for more than a century and which includes 5 million women across the globe.


What do believe Francis’ words suggest?

Bonetti: The attitude of the women who go to Jesus’s tomb and find it empty is what accompanies us when, as Pope Francis says, we go to the “existential peripheries,” to people who have been wounded by life. We expect to find a “dead body,” but instead we find men and women who are alive, and who are waiting for the announcement of a Christ who is able to conquer death and its humiliations. What could more draw us more ably and tenderly to these places of suffering and abandonment than the heart of a woman? This is what the Pope is suggesting in this reflection. What he has told us in recent days, and especially during Easter (when he explicitly condemned human trafficking) comes as a great encouragement in our work.

On March 15, the sisters celebrated the ten-year anniversary of their presence at the Ponte Galeria Centre for Identification and Expulsion in Rome, where immigrants are held for months. Every Saturday afternoon for ten years, the sisters have gone to the centre to visit women, who at a time when there is much talk of dignity of person, are retained between bars and concrete, with no hope and no future. We have never given up, even if we can do very little. Once a nun in Nigeria, when asked by a superior what she was doing in Ponte Galeria, replied: “We do what Our Lady did under the Cross: she could not change the suffering, but she was there.” Being present to say “you are not alone” – this is the heart of the one who sets out on the journey and who struggles, and the Pope reminds us that this is the special role of women, who are “moved by love.” He also told the young people at Casal del Marmo, “I do this with my heart.”


Ruggieri: Pope Francis’s ‘felicitous’ attention to women in the Church encourages and inspires us in our commitment, as does his emphasis on the problem of human trafficking, which is one of the priorities in UMOFS’s work to increase awareness in various parts of the world on the subject of women’s dignity. In fact, next week in Mexico, the Latin American conference dedicated to the trafficking and violence against women will be held. The city of Ciudad Juárez will also serve as a symbol for the Church’s commitment to denounce such violence and trafficking. The women who go to the tomb are the very image of the ‘feminine genius,’ which in the face of death and difficult if not desperate situations, does not “throw in the towel,” but rather, continues to work. The women who go to the tomb of Jesus do not hesitate; they know they have to perform the duty of caring for his dead body, and it is this very ability not to lose heart, to stay alert, that makes them the first to receive the news of the Resurrection. As the Pope emphasized, the Bible and the Gospel are full of stories of strong women: Mary was the first to say “yes” to God by courageously accepting the challenge of exceptional motherhood in her own life. I like the fact that the Pope pointed out that the task of bearing witness to Jesus belongs to mothers and women in general. Often in the Church, we only emphasize the role of woman as wife and mother, which is essential; but there are and there have been many women who, although they are not mothers, have made significant contributions to the building up of the ecclesial community as well as civil society.


Is there a problem in the Church regarding recognizing the role of women?

Bonetti: We must admit that, in the past, a proper recognition of the role of women was often lacking in the Church; however, this should not be reclaimed as a matter of leadership. A woman does not look for “her own place” for herself, but the “right place” in order to place herself at the service of others. For this, we need to find a new terminology, inclusive of the specificity of man and woman, who together in the Church live and announce the Gospel. Even if women have not always been esteemed, they have always been there. Many women have offered in service to others that “motherhood” without which the Church would be sterile (“less a ‘mother’ and more a ‘teacher,’” she said in reference to the 1961 encyclical by Bl. John XXIII, Mater et Magistra). Women help to maintain a certain balance and to rediscover that Jesus made no distinctions – so much so that, as the Pope said, he entrusted the announcement of the Resurrection to women, i.e., those whom the law did not recognize as credible witnesses. Indeed, if he had a preference, it was for those who were most humiliated and despised, man or woman.

Ruggieri: Recognizing the contribution of women in the Church is not played out in terms of reclaiming but of building up the Church as the Body of Christ, according to the image presented to us by the Council in Lumen Gentium. If one part of the body does not function properly, the whole body malfunctions. Implementing a mutual exchange means esteeming and directing the talents of each member to the service of the whole community. When Francis says that women believe and give witness because “they are moved by love,” he is highlighting a woman’s capacity to go beyond the tangible, to follow intuition beyond a purely male rationality, which at times is dismissed as sentimentality or reverie, but which instead is a way of approaching human experience by involving oneself completely in giving witness. I hope that the Pope’s attention to the role of women will boost its promotion, especially in those regions of the world, such as Africa, the Middle East or many parts of Asia, where this awareness is less present, if not completely denied.