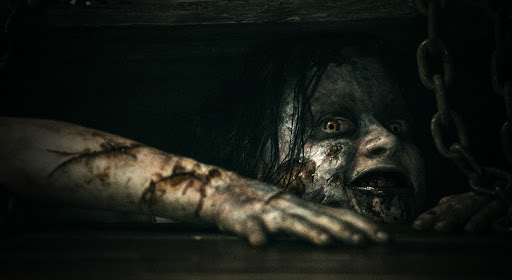 Violent, but a bit more intelligent than you’d expect for the genre

While everybody was busy saving their pennies in early 2012 in order to take the family to see The Avengers on the biggest 3D screen they possibly could, director Josh Whedon quietly released his other movie of that year, The Cabin in the Woods. The film was in part in homage as well as a satire of movies like the original The Evil Dead (1981), full of sly Whedon-esque dialogue, self aware winks to the audience and even some intelligent meta-commentary on the meaning of horror films. The new Evil Dead movie could care less about any of that stuff; all it wants to do is make you remember why so many cabin-in-the-woods movies got made in the first place – to scare you. Period.

Of course, its success will depend on what you find scary. In his novel length essay on horror, Danse Macabre, Stephen King suggested that horror basically functions on two levels: "On top is the gross-out level … The gross-out can be done with varying degrees of artistic finesse, but it's always there. But on another, more potent level, the work of horror is really a dance – a moving, rhythmic search. And what it's looking for is the place where you, the viewer or reader, live at your most primitive level.” I think it’s safe to say that while Evil Dead has a few moments where it touches on that primitive level King mentions, it pretty much starts with the gross-out and wallows in it shamelessly for most of its running time. This is not to say Evil Dead is nothing but another tedious exercise in sadism like so many of the so-called torture porn movies of the last decade (Hostel, Devil’s Rejects, etc.), because the movie actually has a little bit more brains behind it than that. Just be warned the film doesn’t mind showing you those brains when someone smashes them in with a porcelain sink.

It all starts with a prologue in which a father drags his daughter into a cellar full of dead cats and burns her alive in a ritual designed to free her soul from the demons who have possessed her. Following this heartwarming opening, the movie takes a break from the visceral imagery just long enough to introduce its main cast. Along with three friends he hasn’t seen since leaving home, David has brought his sister Mia to their long abandoned family cabin in order to help her go cold turkey from a life threatening drug addiction. This is actually a clever setup for two reasons: first, it makes the five twenty-somethings a bit more empathetic than if they were just another random bunch of debaucherous slackers gathering for a party (the movie is surprisingly lacking in sex and substance abuse). But second – and more important – Mia’s condition provides everybody with a good excuse for staying at the cabin once things start to get weird.

And things do get weird really fast once the group stumbles upon not only the collection of decaying felines hanging in the basement, but also a book made of human flesh with a big warning on the first page written in blood that says “LEAVE THIS BOOK ALONE!” Putting as much credence in this admonishment as one might the warning label on a mattress, the curious Eric can’t help but read aloud one of the rituals contained in the tome, thereby releasing the demons from hell where they had been imprisoned since the prologue. Mia, in her weakened mental and physical condition, becomes the first to be possessed, but the group writes off her initial strange behavior as part of the withdrawal symptoms she was already showing signs of. By the time the blood starts flowing (seriously flowing, like in the way a busted water main flows) and they realize something else far more sinister is going on, it’s far too late to get away.

And that’s it as far as story goes. The movie provides the minimal amount of time necessary to allow investment in the characters, gives them a credible reason for not immediately leaving a cabin full of dead cats and then lets loose with the non-stop splatter. In this sense, Evil Dead is just like the 1981 original that, thanks to its more comedic sequels, most people tend to forget was a straight-up horror film itself. The difference, of course, is that the original was a Sam Raimi horror film, so even with the copious amounts of gore, the presentation was creative and there were moments of levity amidst the carnage. Alas, the new Evil Dead is a patently post-Saw production, so it’s burdened with a washed out color palette and a decided lack of humor. And rather than try and compete with Raimi’s inventive monsters, this Evil Dead instead turns to the body horror of filmmakers like Cronenberg to garner reactions from the audience. So if you don’t like the idea of witnessing the sort of bodily harm can be done with such things as needles, nails, carving knives, pliers, box cutters – you name it – then it’s probably best to stay away from Evil Dead. If, however, you don’t mind the vicarious thrills to be found in Grand Guignol, then this is your movie.

Despite all of that, Evil Dead doesn’t exactly turn its back on its much-ballyhooed predecessor. For the observant fan, there are a number of Easter eggs scattered throughout the film in the form of lines of dialogue and actual props from the original film. And one in particular – the infamous 1973 Oldsmobile Delta 88, when combined with certain story elements, sets up the notion that this Evil Dead might actually be a sequel to the original rather than a reboot. You see, in the aforementioned prologue there are a number of people participating in the exorcism besides the begrieved father, and from their various disfigurements, it’s obvious they’ve all had run-ins with the demons before. In fact, the evil book makes it clear that what is happening to the kids in the cabin is a ritual that keeps repeating itself in an attempt to finally unleash hell on earth if it ever reaches completion.

And, in a sense, isn’t that one of the ways in which evil works in real life? Satan and all the evil spirits may indeed roam throughout the world seeking the ruin of souls, but they’re not often that creative in how they go about it. In fact, doesn’t it seem as if they find what tempts us and then relentlessly hammer away at it again and again, trying to wear us down by attrition? That’s why a healthy regimen of confession and reconciliation isn’t such a bad idea. Of course, in Evil Dead, such a non-visual means of dealing with demons isn’t going to do the trick. The movie instead opts for a chainsaw (which isn’t the least appropriate spiritual metaphor around when you think about it).