Risk of Religious Conflict Possible as a Result of the Arab Spring in Syria, Says Maronite Patriarch 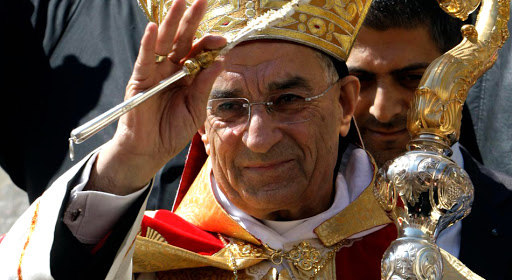 BEIRUT – The democratic momentum of the “Arab Spring” is increasingly unable to hide the risk, at least in Syria, of sectarian strife that threatens to spread to regions in Lebanon.

On the eve of his departure for France, which is scheduled for April 8, the Maronite Patriarch, Bechara Cardinal Raï, reiterated the distance he has taken from the phenomenon that had aroused so much hope. “Dark forces,” he said gravely last Monday in the presence of the French Ambassador Patrice Paoli, “are working to unravel States and institutions, and are seeking tirelessly to spark upheaval among the different religious confessions that, until now, coexist peacefully.” He added that, “ironically, this is being done in the name of democracy and of the ‘Arab Spring.’”

The reservations expressed by the Patriarch towards the Arab revolt, especially that in Syria, and which he as head of the Maronite Catholic Church has clearly indicated, have seemingly been better understood than those he articulated during his first visit to the French capital in September 2011.

In 18 months, in fact, many things have become clearer for both the Lebanese and for French authorities. Did not the latter, on the other hand, recently decide against arming the Syrian free army, for fear that the weapons might fall into the hands of fundamentalist groups?

The Patriarch’s evaluation of the situation appears to regard both the fundamentalist jihadists of Jabhat al-Nusra, who are consolidating their grip on several areas of conflict in Syria, as well as the political fundamentalism bring carried out by the Muslim Brotherhood, based on the (negative) Egyptian model. The fact that he speaks of “dark” forces may suggest that these groups are being manipulated.

“The France of lights will not be indifferent (…) in the face of growing radicalism and fundamentalism and by the proliferation of an obscurantism reinforced by political contradictions and by regional and international interference,” the head of the Maronite Church stated in the presence of Ambassador Paoli. He also called France, as secular as it is, to “clairvoyance,” asking her not to ignore the role of “democratic stirrings” that play among Christians in Arab societies. “The growth of Islamic fundamentalism threatens moderate Muslims, who are the majority. They would risk falling into fundamentalist thought, were Christians to lose their effective presence and beneficial influence within Arab societies.”

In emphasizing this aspect, the Patriarch going against a number of currents that, for exclusively political reasons, do not miss an opportunity to demonize Islam and lump moderates and extremist Muslims together. The Cardinal is also trying to warn the West about the possible consequences of the Christian presence in the East becoming a desert.

Therefore, in agreement with all the Catholic and Orthodox Christians religious leaders, the Patriarch is again asking today, as he initially asked in September 2011, for an immediate end to the violence in Syria, and a political solution to the conflict. In his view, though he has had never openly expressed it, there was never a question of supporting a regime, but rather of promoting a political solution that reduces the risk of an exodus of Christians from Syria. At Bkerke, they insist that “between the hammer and the anvil,” Christians have no choice, and are more concerned about the impact of the current fighting, which is likely to continue long-term if not indefinitely, than about long-term historical consequences.

For Lebanese aware of the risk, this request is also a matter of self-defense. In different Lebanese regions, beginning in Tripoli, sporadic clashes have pit opposing Sunni fundamentalists against pro-Syrian forces. At the national level, this exacerbates the antagonism between Sunnis and Shiites. Have we not seen Shiite thugs shave the beard of a Sunni cleric whom they blocked in a neighborhood of Beirut? The threat of jihad is still present in Lebanon. The approximately 2,700 armed elements present in the country are geographically scattered, and pledge different allegiances. Their impact is, at present, limited. However, this is not a reason to neglect the potential danger of a possible radicalization of the Sunni community, which risks fueling violence. The radicalization is latent and could erupt when a first incident occurs. Fortunately, the army has thus far remained out of the contagion and has been able to control these outbreaks of violence. But can the soldiers, who according to specialists are already heavily engaged, be asked to be everywhere at the same time?