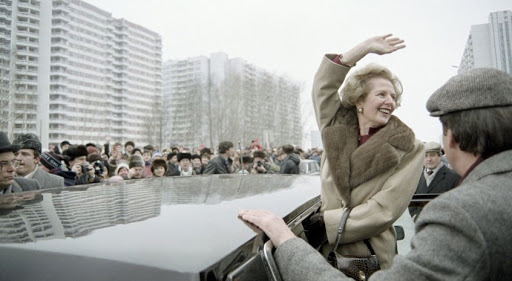 London, England – The United Kingdom's Catholic bishops voiced grief and prayed for the soul of former prime minister Margaret Thatcher, who died on Monday following a stroke.
“It was with sadness that we heard the news of the death of Baroness Thatcher, who served this country for many years both as a Member of Parliament and as Prime Minister,” said Archbishop Vincent Nichols of Westminster on behalf of the local bishops' conference.
“We pray for the repose of her soul and for the intentions of her family and all those who now mourn for her.”
Thatcher died the morning of April 8 at the age of 87. She was the first female prime minister of the U.K., and the longest-serving in the 20th century. From 1979 to 1990, she served in the role for the Conservative Party.
She was closely aligned with Ronald Reagan and John Paul II against communism and the Eastern bloc, and was nicknamed the “Iron Lady” by the press of the Soviet Union. Thatcher was also opposed to the movement which has led to the European Union and adoption of the euro.
Domestically, she supported economic deregulation, privatization, and opposed labor unions. She served as a member of parliament from 1959, and was Secretary of State for Education and Science under the government of Edward Heath. While the Labour Party was in control of the U.K. government from 1975 until her election, she served as Leader of the Opposition.
As prime minister, Thatcher defended the U.K.'s possession of the Falkland Islands, an archipelago off the coast of Argentina. The U.K. has held the islands since 1833, though they are claimed by Argentina.
In 1982 Argentina invaded the islands but were repelled by British forces. The two-month war over the islands cost 907 lives. Her decisive response in the conflict renewed her support in the U.K. and helped ensure that the Conservatives won the 1983 election.
Thatcher survived a 1984 assassination attempt by the Irish Republican Army, which was fighting for Irish independence from the U.K.
She was raised Methodist, and joined the Church of England when she married Denis Thatcher in 1951. They were married until his death in 2003. She is survived by her children, Carol and Mark.
David Cameron, the current prime minister, told the BBC that “I believe she will go down as the greatest British peacetime prime minister.”
Justin Welby, the head of the Church of England, said that “it is right that today we give thanks for a life devoted to public service, acknowledging also the faith that inspired and sustained her.”
Queen Elizabeth II has expressed sadness at Thatcher's death, and President Obama said the world has “lost one of the great champions of freedom and liberty.”