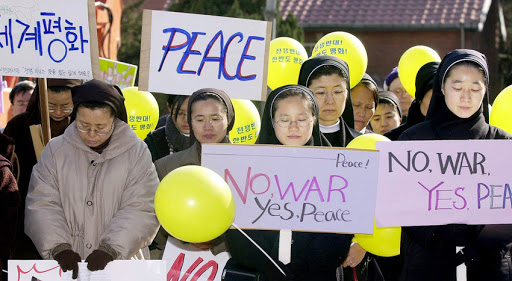 It was reported that an anonymous North Korean Christian said that Pope Francis' recent calls for peace have strengthened them. Also recently, North Korean bishops said they thought Kim Jung Un's threats are really more about saving face than any desire to actually start a war. AsiaNews has the story:
Seoul (AsiaNews) – Pope Francis's appeal for peace on the Korean Peninsula "was a consolation for all of us living in North Korea. Even though the government did not give much publicity to the event (Urbi et Orbi blessing on 31 March), we heard about it. Like him, we hope for peace.  We do not want to be isolated from the rest of the world," said a North Korean Christian. Anonymous for security reasons, he spoke to a source working at the border who relayed the information to AsiaNews.
According to the source, "there will be no war. Our bishops are right; it is a matter of political balance in the North and humanitarian aid. Pyongyang cannot lose face, so all these threats have to produce something. But it is hard to know whether there will be a land invasion or an attack against US or South Korean military sites. Whatever the case, we must pray, as the pope said, for there to be peace and a new reconciliation in Korea. "