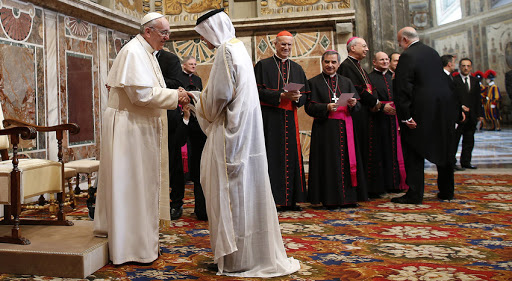 Through numerous touching gestures, even in the choice of a name, Pope Francis already has made solidarity with the suffering and poor of the world a signature of his pontificate. As he works to extend this solidarity globally, he will soon confront one of the world’s largest forms of human rights violation: the denial of religious freedom.
The Pew Forum reported in 2010 that nearly 75% of the world’s population lives in countries with high restrictions on religious freedom. Of those whose religious freedom is violated, a strikingly high proportion are Christians. David B. Barrett and Todd M. Johnson, two of the world’s leading religious demographers, report that more Christians were martyred in the 20th century than in all previous centuries combined. The trend has maintained its dolorous momentum in the present century. Although numbers are disputed and vary with counting methodologies, the number of Christians who are killed for their faith every year almost certainly lies in the thousands by conservative estimates and tens of thousands by wider but still plausible estimates. Among all of those who are persecuted for their religion, Christians make up 80% as estimated by the International Society for Human Rights. Among the countries in which Christians are killed are China, Indonesia, Sri Lanka, North Korea, Saudi Arabia, Egypt, Mexico, Nigeria, Colombia, Pakistan, Iraq, Vietnam, and India.
Worryingly, western Europe, Canada and the United States are placing increasing restrictions on the religious freedom of their citizens as well. Although persecution is too strong a word for what religious believers have experienced in these countries, these curtailments depart from longstanding norms of religious freedom and contain inner logics that, were they to be played out further, point in the direction of persecution.
Francis’ predecessor, Pope Benedict XVI, sought deliberately and assiduously to raise this issue. He made religious freedom the subject of his 2011 Message for the World Day of Peace, for instance. He took a tougher stance towards Islam than did his predecessor, Pope John Paul II, and elevated the prominence of religious freedom in his engagement with Islam. Of course, John Paul II was hardly passive towards religious freedom. Long before he became pope, he helped to draft Dignitatis Humanae, the Second Vatican Council’s landmark teaching on religious freedom. As pope, he seized upon the occasion of the Jubilee Year in 2000 to lift up the Christian martyrs of the 20th century, reminding the Church that these martyrs are not a bygone historical reality.
The commitment of any pope to the continuity of Church teaching, Francis’ own special commitment to the poor, and the unabated reality of the large-scale persecution of Christians and other religious believers together augur that Pope Francis will advocate religious freedom in his statements and his policies. Here are some ways in which he might lead the Church in this advocacy:
• Promote awareness and solidarity with persecuted Christians and believers of other faiths throughout the global Church and especially at the level of the pews. National Catholic Reporter’s John Allen, one of the world’s leading voices for persecuted Christians, has noted often how astonishingly little attention these beleaguered believers receive in places where the church lives far more comfortably. While causes like global hunger and disaster relief (rightly) make their way into Sunday bulletins and are highlighted for special collections, few comparable efforts are made on behalf of religious freedom. Homilies, mass prayer intentions, special prayer services, and visual displays are all possible vehicles for awareness. A model for promoting solidarity is the Community of Sant’Egidio, who maintains the Church of San Bartolomeo on Rome’s Tiber Island as a shrine for contemporary martyrs and conducts an annual prayer for these martyrs at Rome’s Basilica of St. John Lateran during Holy Week. Similar such efforts ought to take place in Paris, Panang, and Pittsburgh.
• Train the Vatican diplomatic corps in religious freedom – its global profile, strategies for promoting it, and responses to its violation. Following the 1999 International Religious Freedom Act, religious freedom was incorporated into the architecture of U.S. foreign policy. Similarly, religious freedom might become part of the repertoire of every nuncio and official in the Vatican Secretariat of State.
• Make religious freedom the subject of efforts to build ecumenical relations. The Community of Sant’Egidio’s annual prayer for the martyrs deliberately includes Protestant and Orthodox martyrs. There are indeed few better ways to build ties with the “separated brethren” than through what Cardinal Kurt Koch of Switzerland has called the “ecumenism of the martyrs.” Solidarity is built around the truest, deepest devotion to Christ.
• Raise up examples of Christians who have responded to persecution in ways that distinctively manifest Christ – like that of Pakistan’s Shahbaz Bhatti, who was assassinated on March 2, 2011 by Islamic militants. As Pakistan’s federal minister for national harmony, Bhatti’s job was to protect national minorities, including the browbeaten Ahmadiyya movement of Islam as well as the country’s Christians, 2% of the population. Championing this cause, he knew that his life was in danger. He had even renounced marriage because he did not want to leave behind a family without a father. Prior to his death, he recorded and released a video in which he stated, “I believe in Jesus Christ who has given his own life for us, and I am ready to die for a cause. I’m living for my community . . . and I will die to defend their rights.” When Shahbaz’ brother Paul Bhatti, traveled to Rome for a conference that Sant’Egidio held in Shahbaz’ memory on April 5, 2011, he forgave his brother’s killers, explaining that “our brother Shahbaz was a Christian and the Christian faith tells us to forgive.” After overcoming his own bitterness over his brother’s death, Paul Bhatti accepted the position of federal minister for national harmony in Pakistan, taking up his fallen brother’s standard.