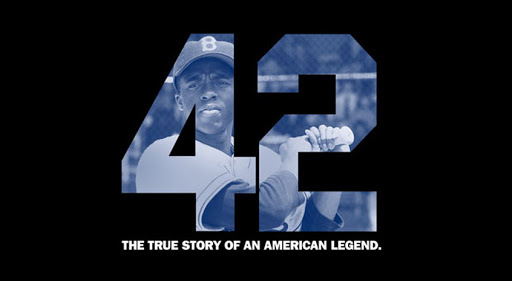 I have to admit up front that I'm not much of a baseball person. My involvement with the game ended around the age of nine, when on one particular balmy evening I made the stupid mistake of removing my helmet to wipe the sweat from my brow as I exited a dugout. For my absent-mindedness I was rewarded with an aluminum bat upside my unprotected skull by a player taking practice swings in the on-deck circle. After CAT scans determined I had suffered no serious brain injuries (which some people still debate even to this day) and I was released from the emergency room, I decided I could find better ways to spend my spare time than hanging around baseball fields. (Watching more movies seemed like a good idea.) That's likely the reason why, as I walked into the new movie, 42, what little I knew of legendary first baseman Jackie Robinson would barely be enough to fill a one-minute Public Service Announcement during black history month. But after having seen 42, I can say with some confidence that what I now know of Jackie Robinson can probably fill up a whole two minutes, maybe even three.

That's not necessarily a criticism. There are plenty of biographies out there that attempt to look beyond the public persona of a famous individual and delve into the dark corners of their private lives; 42, however, is not one of them. So if you were hoping to discover some previously unrevealed facts like Jackie Robinson secretly wore women's underwear or that he beat his children for using wire hangers, 42 is not the movie for you. In fact, if you were wanting to ferret out even the most innocuous fault in Jackie Robinson's character, like maybe he once forgot to tip a waiter or occasionally criticized his wife's cooking, you won't find any of that kind of stuff in this movie either.

What will you find is something first hinted at in the title – the name of this film is 42 and not The Jackie Robinson Story, and the distinction becomes an important one thematically. You see, as the movie helpfully tells us, 42 was the number on Jackie Robinson's jersey, and it has since been retired from baseball in his honor. But on April 15 of each year, it has become a tradition for every player and umpire in the MLB to wear the number 42 in commemoration of the day Jackie Robinson made his major league debut and effectively ended eighty years of unofficial racial segregation in professional baseball. “42” has thus become a symbol for larger societal concepts, and ultimately, that's what this film is really about: what it takes for a person to become a living symbol of something bigger than themselves and why we sometimes need them to do so.

To that effect, 42 covers only two years in the life of Jackie Robinson, from the moment in 1945 when MLB executive Branch Rickey made the decision to bring Robinson to the minor leagues to the day in 1947 when he helped Rickey’s Brooklyn Dodgers win the National League pennant. (Oops, sorry for those who didn't know that. A 66-year-old spoiler, I guess.) Rickey is played with glee by Harrison Ford in full-on grumpy old man mode – a role he seems to be specializing in these days – except this time around his surliness is tempered with a healthy dose of Holy Scripture. The businessman is constantly referring to the Good Book, especially when he first brings Robinson to his office to make his proposal and uses the words of Jesus to instruct Robinson how he will be expected to act towards those who assail him both on the field and off. It’s as if from the moment he signs the contract, Robinson agrees to become an icon, or at least an icon-in-training.

And Rickey’s not the only one who expects this of Jackie; all of the characters in the movie with any positive feelings towards Robinson – be it his wife, Rachel; the black sports journalist, Wendell; his teammate, Pee Wee Reese; and even some random white guy who approaches the Robinsons on the street – spend most of their screen time with Jackie telling him what he represents or what qualities he possesses (or needs to develop) that help uphold that image. To be fair, the movie does take a little time showing how each of these characters have their own part to play in supporting Robinson and how each of them is personally affected by his struggle. Robinson's white teammates, for example, are denied hotel rooms because they play ball with a black man, and Reese in particular receives threatening letters from people in his home state. Still, it's no exaggeration to say the movie is mainly about Robinson being groomed to be a messiah figure.

In fact, the movie basically says this is what is going on during one key scene in which Jackie is on the verge of quitting the team. Finding Robinson huddled in a tunnel after being publicly humiliated by the racist coach of an opposing team, the only words Rickey can offer Jackie is that it is his burden to live the sermon Rickey has been preaching. Only if Robinson suffers first can the rest of us come to understand his sacrifice and then share in it. (I know, right?) The only way the allusion could be more blatant is if the scene had played out in front of a painting of the Garden of Gethsemane.

Fortunately, even with all the preaching going on in 42, the movie miraculously never feels too ham-handed, the credit for which goes mainly to the lead actors. The Robinsons, played by Chadwick Boseman and Nicole Beharie, don’t get much in the way of intimate dialogue, but their expressions and mannerisms when they’re with each other leave no doubt of the real love which exists between the couple. And as for his part, Harrison Ford takes what could have been a one-note role and turns it into a highlight of the film. How many other actors out there do you know who are so likable they could get laughs and applause from an audience even as their character uses the Bible to chastise a coach for adultery? (The response in the theater to that moment was enough to give me hope for the future.)

So as long as you don’t mind not getting to know too much about the private Jackie Robinson and can handle some good old-fashioned Christian moralizing (personally, I can’t wait to read some of the bound-to-be-uncharitable secular reviews after I finish writing mine), then you just might have a fine time watching 42. Who knows – you might even leave the theater feeling inspired enough to lean in there and take a few hits from the fast pitches life has in store when it’s your turn at bat.