Film Review: To the Wonder 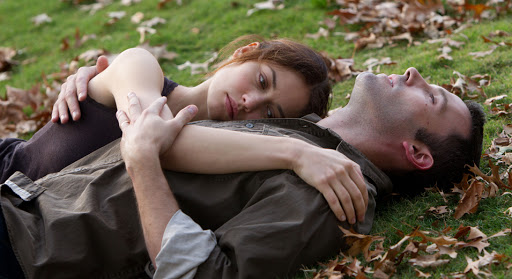 It’s a Terrence Malick film. You have to know that going in.

To The Wonder is the kind of film I want people to watch so I can discuss and debate it with them afterwards, but I don't want to actually be the one who recommends they see it because I'm afraid they’ll hate me for it later.

It is the kind of movie where somebody asks you if you liked it and you tell them to ask you again in a few weeks and maybe you’ll have an answer, or the sort of film when a character looks at a vase full of pretty purple flowers on the kitchen table, you wonder if it has any deeper significance or if it's just a bunch of pretty purple flowers.

It is a production you honestly admire for its unrepentant artfulness, even though you know you're going to brutally make fun of at least some of it after the credits roll. And it is the kind of film that a handful of moviegoers will defend with their lives, another handful will demand that the director never be allowed to work again, and the remaining 90 percent will probably never even bother going to see in the first place.

1. The movie will look beautiful. Everything in a Terrence Malick film appears the best it’s ever going to, maybe even better than it does in real life. Rest assured that after seeing Malick’s panoramic vistas of Oklahoma, you'll finally understand what Gordon MacRae was singing about all those years ago. But it’s not just the pretty stuff; there are visions of toxic dump sites in To the Wonder that are so bewitching to behold that you’ll want to take your children there, place them knee-deep in the cancerous sludge, and exclaim, “Behold the magnificence that is the American landscape!”

2. The film score will be sublime. Malick seems to love the softly swelling orchestrations one often finds in symphonic music and uses them to better effect than most any other filmmaker around. He especially loves to use the parts that start near a whisper, then crescendo more and more, and then… it ends. The senses are left hanging, waiting, really paying attention to make sure you don’t miss what’s next. The winner this time around is Wagner’s prelude to Parsifal. To the Wonder makes me want to go listen to that piece right this instant, then lunge for the off button before the Act I dares to offer any kind of resolution.

3. The movie is going to be slow. There are films that have a languidly lyrical pace that floats you along their running time, leaving you to hope they linger on particular scenes just a bit longer so you can soak in every marvelous moment. And then there are films that feel so tortuously snail-like you are compelled to occasionally glance down at your preferred timepiece to see just how much longer the blasted thing can possibly drag on. Without fail, Malick's films are always both, often in the same scene.

And yet, despite everything you’ve just read about how artistically conceived the film is, the storyline of To the Wonder remains a fairly simple and linear one. While traveling in Europe, Neil (Ben Affleck) falls in love with Marina (Olga Kurylenko) and convinces her to move to his house in America with her young daughter in tow. The relationship eventually peters out as Neil refuses to consider marriage and Marina returns to France when her visa expires. For a while, Neil takes up with Jane (Rachel McAdams), a lonely rancher he knew as a child, but eventually he reunites with Marina and finally marries her. Marina, however, is still not sure things are how they should be, and their relationship begins to sour yet again. Running concurrent to all of this is the story of Father Quintana (Javier Bardem), the priest at Neil & Marina’s local parish, who has been experiencing a dry spell and is searching for something to reignite the joy he once felt in his vocation.

But, again, this is a Terrence Malick film, so although the story is simple, it is not told simply. For most of the movie, we see the characters talk to one another but we never hear their words. Consequently, To the Wonder is a film you have to watch because much of the narrative is conveyed through body language, staging and scenery. Marina is constantly in motion, twirling about in almost every scene, while Neil is mostly stiff and expressionless (you can insert an Affleck joke here if you want to). We see the couple going through the motions of building a relationship, and yet their home remains almost completely unfurnished and undecorated. There is nothing that indicates permanence. Often when they are shown together in the home, they will be standing in different rooms, sometimes even on different levels. Neil buys a bedroom set, but never seems to finish assembling it. He does build a fence, however, and constantly checks to make sure it’s in perfect condition.

When we do hear the characters talk, it is often in whispered voiceovers as they tell us their true feelings, their hopes, their impressions of what happened during the vignettes we’re spying on. And it’s in these moments where we begin to see the real story Malick is telling: To the Wonder is a film about the search for love, but it is God’s love in particular that Marina, Jane and Father Quintana desire most of all. The priest’s longings are the most obvious – he wants to feel the love of God in his work again. To this end, he follows God’s advice and devotes his time to the poor, the sick and the imprisoned, looking to find God’s love in service to others. Jane is lonely and desperate for companionship, but it is one which must include God in order to be real. One of the first things she requests of Neil is that he pray with her.

As for Marina, she wants nothing less than a husband whose love reflects that of God himself – a God whom she continuously prays to as the “love who loves us.” Her first words – the first we hear spoken by anyone in the movie – are, “Newborn. I open my eyes. I melt. Into the eternal night. A spark. You got me out of the darkness. You gathered me up from earth. You've brought me back to life.” They are the words of a person born again in God’s love, and Marina applies them to her new relationship with Neil. Alas, Neil himself has no faith, and therefore no ability to give Marina (or anyone else) the kind of love she craves (this is not the most atheist-friendly movie around). Later, after Neil finally marries her, it would appear things are moving in the right direction, but Marina is still unsure. In order to know once and for all, Marina commits a horrendous act and immediately confesses it to Neil. As the two silently argue, we hear only one word spoken in Marina's mind, “Forgive.” If Neil can do that, Marina will know she has found an earthly love that truly reflects the one that loves us. You can fault her methods, but not her standards.

So how does it all turn out? Does everyone find God’s love in the end? The only hint I’ll give is that the movie ends with an unresolved musical prelude. I'd say go see it yourself to find out, but this is a Terrence Malick film, so I'm not taking responsibility for that. You'll just have to decide whether or not to go on your own.