Francis Says Those Against Vatican II Are “Stubborn”, Resist the Holy Spirit 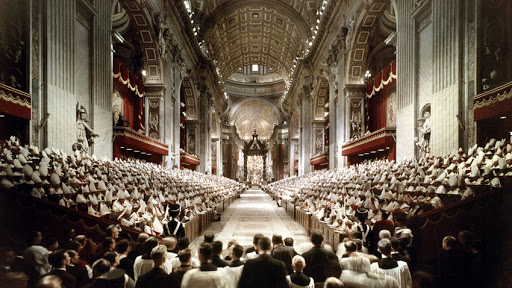 Says the council was a “beautiful work” of the God

At a morning Mass, Pope Francis, called the Second Vatican Council a "beautiful work of the Holy Spirit" and said that those who are against the council, or want to backtrack from it, are resisting the work of the Holy Spirit. AsiaNews has the story:
Vatican II "was a beautiful work of the Holy Spirit," and yet, 50 years later, there is no "Church continuity". There are "stubborn" members who even want to turn back and "tame the Holy Spirit." Pope Francis took the opportunity to speak about the Council 50 years since it opened, inspired by the passage in the Acts of the Apostles that tells the story of Stephen who, before he was stoned, described as "stubborn" those who oppose the Holy Spirit.
The Holy Father spoke during the Mass he celebrated this morning in the chapel of Santa Marta (pictured), dedicated to Benedict XVI, who turns 86 today, so that "the Lord may be with him, comfort him and give him much consolation." Francis personally extended his good wishes to Benedict XVI with whom he spoke by phone.
Vatican Radio reported that, during the homily, when he commented Stephen's words and remembered Jesus' rebuke to the disciples of Emmaus, "Oh, how foolish you are! How slow of heart to believe all that the prophets spoke!", the Pope said that "always, even among us, there is resistance to the Holy Spirit."