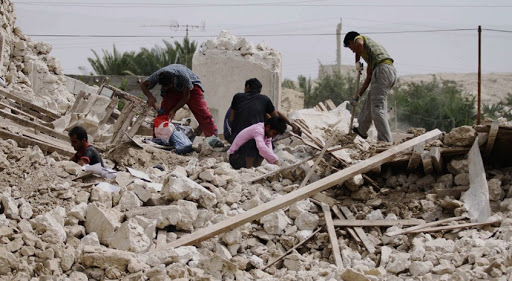 The Red Crescent has dispatched teams to the area

A huge earthquake, measured to have a magnitude of 7.8, has hit Iran near its border with Pakistan. Though there have been no confirmed deaths, one Iranian official said that hundreds of deaths were expected. Reuters has the story:
A major earthquake struck Iran near the border with Pakistan on Tuesday and an Iranian official said hundreds of people were feared to have been killed.
Tremors from the 7.8 magnitude quake were also felt in India and Gulf states.
"It was the biggest earthquake in Iran in 40 years and we are expecting hundreds of dead," said the official, who spoke on condition of anonymity.
The U.S. Geological Survey said the quake hit at 5:44 a.m. ET at a depth of 15.2 km (9.4 miles).
People in the city of Zahedan poured into the streets when the earthquake struck, Iran's Fars news agency reported.
All communications in the area have been cut, the Iranian Red Crescent's Mahmoud Mozaffar told state television. Rescue teams have been dispatched to the affected area, he said.