The Absurdity of Evil and the Boston Bomb 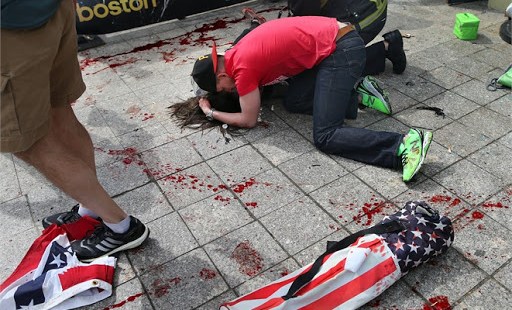 “Rational insanity” and the single-mindedness that leads to madness

There is a character in one of
C.S.Lewis’ science fiction books named Professor Weston. Weston is an ordinary man, who has become pure evil through his fanatical allegiance to a secular ideology. Weston enjoys torturing innocent animals and engages with the hero in an endless debate which seems to be logical, but defies the usual definitions of reason. His arguments are circular and his conclusions lead him not only to insanity but to evil. Weston eventually wishes to destroy simply for the sake of destroying. Lewis’ character study shows how wrong beliefs can lead to an alarming for of “rational insanity” and eventually to the total absurdity of evil.
“Rational insanity” is my term for the sort of single mindedness that leads to madness. We have all come across conspiracy theorists or religious extremists or ideological monomaniacs who can only see the world through one particular narrowed down set of beliefs and values. The more extreme they become the more the drift into a kind of madness. This madness is not the sort of mental illness that can be diagnosed and treated. It’s not the sort of insanity that appears insane. Instead, it is a kind of “rational insanity”.
Taking the foundational assumptions of a particular religion, theory or ideology and building on them, the evil person operates along set rules of behavior and belief which are consistent and rationals with his own belief system. A person truly convinced of his religion or conspiracy theory or ideology can wind up believing the most outrageous things and behaving in the most outrageous way because he has followed this kind of “rational insanity.” Furthermore, this “rational insanity” can (and very often will) lead him to plan violent and extreme actions.
This leads to what I call the “absurdity of evil”. A person following an extreme theory, ideology or religion crosses the boundary to perpetrate an atrocity like the two bombs in Boston yesterday. We don’t know who planned the attack, but we do know that it was an intentional act, and that whoever did it, probably thought he had some sort of reason for doing it. He had a cause. He was the devotee of some twisted theory, ideology or religion.
He detonated a bomb in the midst of an crowd killing an innocent child, two others and maiming hundreds more. To have done such a thing means the murderer had descended into this form of “rational insanity”. He fell into this form of madness which seems sane on one level and yet opens up into the dark pit of the absurdity of evil.
The problem with this kind of ideologue is not that he is irrational, but that he is too rational. He has followed the reasoning of his theory, religion or ideology to its end point, and his consistency and courage has led him out the other side or rationality to do something irrational. To give an example, a Muslim extremist may have been taught that  America is the Great Satan. If this is so, then it follows that it would be a good thing for the world to be rid of the Great Satan. A total adherence to this belief–untempered by common sense or compassion or compromise–would rationally lead to a plan to do anything possible to eliminate the Great Satan, and a person may therefore fall into the dark hole of the absurdity of evil.
What is frightening about such “rational insanity” is that we see these behaviors not only in political or economic ideologies or conspiracy theories, but also within the ranks of the followers of religion. Religion drifts into this rational insanity and the absurdity of evil when religious people allow themselves to form cults. Those who perpetrate or join religious cults can fall into the same rational insanity as deluded ideologues. Furthermore, it is the extreme cult-like behavior of many religious groups which give true religion a bad name.