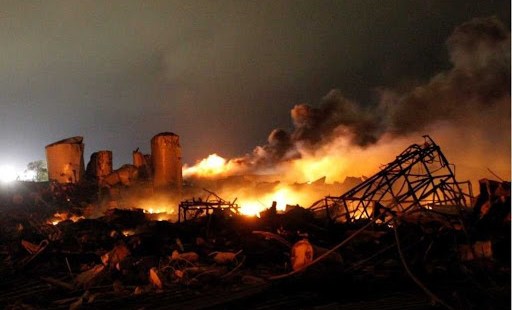 There are also reports of looting

There has been a huge explosion at a chemical plant in Texas. 15 are reported dead, 180 injured. Volunteer firefighters are missing, and there are reports of looting. ABC News has the story:
Volunteer firefighters are missing and reported looting is of “significant concern” today after a deadly fire and chemical explosion at a Texas fertilizer plant leveled buildings and prompted widespread evacuations.
The fire and explosion Wednesday night in a small town north of Waco sent at least 180 people to hospitals and authorities fear that five to 15 people could be dead.
“Homes have been destroyed. Part of that community is gone,” Waco Police Department Sgt. William Swanton said at a news conference today.
The blast at the West Fertilizer Plant in West, Texas, occurred just before 8 p.m., but officials still were struggling to tally the dead and injured early this morning and searching door-to-door amid the rubble for survivors, police said.