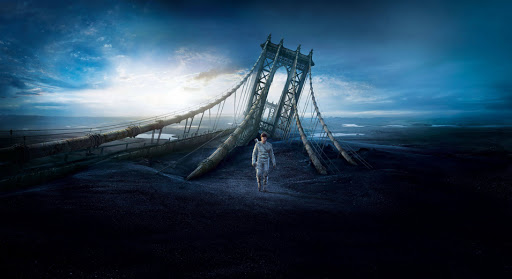 Not original, but not bad either

If you are an inveterate moviegoer, then Oblivion is the sort of film where your decades spent viewing thousands of films can actually be a kind of liability. As you sit in the theater watching Oblivion unfold, you probably won’t be able to stop yourself from thinking, “Aw man, I bet I wouldn't have guessed that was going to happen if they hadn't already done it better in the original Planet of the Apes. Oh well, at least that part there was a nice character touch. Of course, they did it better in Wall-E. And this whole scene here might have had more impact if they hadn’t done it better in Independence Day.” (Okay, that last part’s not entirely true – nobody in all of history will ever say they did anything better in Independence Day. But you get the idea.)

Oblivion borrows from (or homages if you want to be charitable) just about every sci-fi movie released since the late 1960s. In fact, even Oblivion’s big shocking twist is lifted directly from another movie, one that can’t be named because it would instantly give away the whole thing. (And, yes, that other unnamed movie did it much, much better.)

But derivative and inferior doesn’t necessarily equal bad. After all, The Magnificent Seven is both derivative and inferior to Kurosawa’s Seven Samurai, but it’s still considered a classic in its own right. So how is Oblivion in comparison to the multitude of movies from which it borrows? Well, it’s unlikely to make too many lists of classics, but you still have to give it some points for trying really hard. Writer and director Joseph Kosinski has put his background in architecture and design to good use and created a film full of visual treats. Much of the CGI on display is reminiscent of old school matte paintings, and that’s meant as a compliment. Along with the pretty scenery, Oblivion also benefits greatly from a score composed by electronic artist M83, who eschews his usual dance rhythms for a more swelling symphonic sound.

Most important, however, is that Kosinski’s heart really seems to be in making a smaller, more intimate movie than Oblivion’s impressive budget and the presence of mega-star Tom Cruise would suggest. Oblivion is set in a future in which an alien race has destroyed Earth’s moon, the cataclysmic aftermath of which has left the planet almost completely devastated. However, against expectations, we're never shown these events. Instead, all we see are the results, a barren landscape littered with the remains of recognizable landmarks buried in the sand. In Oblivion, worldwide destruction is the backdrop of the movie, not the point.

Because of that, those seeking a thrill ride will likely leave Oblivion a little disappointed. There are action scenes, of course, and they are well done. Anyone who has seen Konsinki's previous effort, Tron: Legacy, will know he has the chops to put together a good sci-fi action sequence. But Konsinki is much more interested in his characters, and to that effect we spend most of the first act of the film quietly observing Jack (Cruise) and Victoria (Andrea Riseborough), the only two humans populating this barren landscape. After the end of the war, we are told, Earth’s human survivors migrated to Saturn’s largest moon, Titan, leaving behind enormous machines designed to convert Earth’s oceans to energy for use by the colonists. Jack and Victoria are the couple assigned to oversee the maintenance of the robot drones which service the machines, with Jack doing the leg work while Victoria supervises from their tower-like home. As part of the assignment, Jack and Victoria have had their memories erased in order to prevent the few remaining aliens on Earth from learning the location of the human colony should they be captured.

With only two weeks remaining in their assignment, complications begin to arise between the couple. Despite the condition of most of the planet, Jack has begun to find spots of life and beauty, making him hesitant to leave his earthly home. Without Victoria’s knowledge, he has even begun construction of a cabin which he fills with books and other items collected on his daily maintenance rounds (Jack has excellent taste in classic rock on vinyl). Victoria is aware, however, of the dreams Jack has recently started having, dreams of a pre-war life that includes a woman who isn’t Victoria. Finally, with just a few days left before their departure, the couple's lives (as well as their perception of reality) are irreversibly altered when the aliens, who have taken a curious interest in Jack, summon an old human spacecraft once thought lost back to Earth. When Jack arrives to investigate the crash site, he finds a number of humans in hibernation chambers, including the woman from his dreams.

To say too much more about the plot would be a disservice to the film. Oblivion may be derivative in parts, but it does have its own story to tell. And though it never rises to the level of classic, as in all decent  science fiction, Oblivion has some things to say about the human condition as well. Like Danny Boyle’s Sunshine before it (which, of course, did it better), Oblivion ponders the question of the existence of a soul from an atheist (or at least agnostic) position. Is the soul really just the sum total of our memories? What happens if we loose them or give them up? Are we forfeiting our souls by doing so, do we cease to exist as a person? Or is a soul, if it exists, something more than memories? Jack certainly comes to believe so. “If we have souls,” he muses, “they are made of the love we share.”

As a Christian, I can’t help but enjoy when stories, even mediocre ones, tackle this kind of subject matter, struggling to find the things God offers while simultaneously trying to avoid God himself. I say let them keep seeking so that perhaps one day they might just find what they’ve been looking for all along. “You have made us for yourself, O Lord,” Saint Augustine so rightly claimed, “and our heart is restless until it rests in you.”