Pope Says Finding Jesus Outside the Church Is Impossible 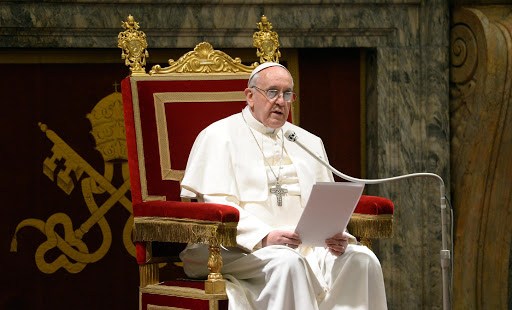 Following Jesus without the Church is an absurd dichotomy, he says

Vatican City – Pope Francis said that people cannot be fully united to Jesus outside of the Church during a Mass to commemorate Saint George, the saint he is named after.
“You cannot find Jesus outside the Church,” he said April 23 in the Apostolic Palace’s Pauline Chapel.
“It is the Mother Church who gives us Jesus, who gives us the identity that is not only a seal, it is a belonging,” he declared in his homily.
The pontiff spoke about Christian identity as well as persecution, making it the sixth time in two weeks he has mentioned those who suffer for the faith.
Speaking about the Gospel reading for today from Saint John, Pope Francis underscored that “the missionary expansion of the Church began precisely at a time of persecution.”
“They had this apostolic fervor within them, and that is how the faith spread!” he exclaimed.
It was through the Holy Spirit’s initiative that the Gospel was proclaimed to the Gentiles, the Pope noted, and the Spirit “pushes more and more in this direction of opening the proclamation of the Gospel to all.”
The pontiff also repeated a line from his April 17 homily in St. Martha’s residence, when he emphasized that being a Christian is not like having “an identity card.”
“Christian identity is belonging to the Church, because all of these (the apostles) belonged to the Church, the Mother Church, because finding Jesus outside the Church is impossible,” he said.
“The great Paul VI said it is an absurd dichotomy to want to live with Jesus but without the Church, following Jesus out of the Church, loving Jesus without the Church,” he added.
Pope Francis said that “if we are not sheep of Jesus, faith does not come” and that it is “a rosewater faith and a faith without substance.”
The Pope also commented on Barnabas, who was sent to Antioch and was glad to see that the grace of God had encouraged people there to remain true disciples.
“Let us think of the consolations that Barnabas had, which is the sweet and comforting joy of evangelizing,” he preached.
“Let us ask the Lord for this frankness, this apostolic fervor that impels us to move forward, as brothers, all of us forward,” he remarked.
After the Mass in the papal chapel, the Swiss Guard band offered a brief musical performance in the Courtyard of Saint Damaso for the Pope’s name day.