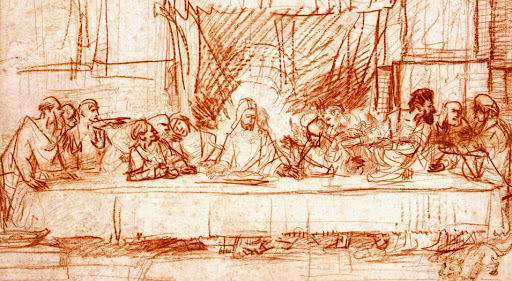 Can sacred art be saved?

Let’s be honest: people flock to Florence to see Michelangelo’s David, to Rome to see St. Teresa in Ecstasy and to Paris to see Notre Dame. But do we often see anyone exclaiming over the latest masterpiece in any modern churches? For most of us, the answer is: “rarely, if ever.” Sadly, the mastery from ages past that still inspires us today is harder to come by in today’s world of art.

There certainly are a few examples of praiseworthy sacred art being done today. Architect Duncan Stroik, who designed Our Lady of the Most Holy Trinity Chapel at Thomas Aquinas College in Santa Paula, California, comes to mind. Artists James Langley and Neilson Carlin, as well as sculptor Anthony Visco help to fill what otherwise would be a complete void of truly beautiful pieces of sacred art. On the whole, however, many Catholics seem satisfied with banal art and utilitarian buildings rather than beautiful works that reflect the goodness of God.

Surely, if such masterpieces as the Pietà and St. Peter’s Basilica were created before, there is the possibility that sacred art will ascend to great heights once again. I am reminded of the story of how the ancient Greek sculpture of the Laocoön was found in 1506 A.D: this intricate marble sculpture of Laocoön and his sons was likely created somewhere between 42 and 20 B.C., and yet it far surpassed much of the art being produced in the early 16th century. Once rediscovered, artists such as Michelangelo studied it and considered it a major influence in their depiction of human figures. While the Laocoön is not sacred art, its discovery surely demonstrates that we can learn from the past and, indeed, strive for the heights of beauty in the modern age.

What did the past have that we don’t have?

A common vision of reality. During the Middle Ages and the Renaissance, most of Europe was Christian. On the whole, society appreciated that there was a sacred dimension to life – that faith was not merely the pages in the Bible, but a subject just as worthy of art (indeed, more so) as landscapes and portraits. Additionally, this common Christianity meant that artists themselves often had some form of catechetical background. Today, due to the predominant secularism in Europe and the United States, many artists and architects lack the theological background to create pieces of art that accurately reflect the sacred.

A sense of art as reflecting reality. Contemporary art focuses on the individual and communicates the relativism that is so widespread in our culture. In contrast to the Sistine Chapel ceiling, which recounts the story of the Creation, or Giotto’s frescoes of the life of St. Francis, contemporary pieces of religious art frequently focus on one person’s perspective on the sacred. This focus makes it difficult for such individualistic pieces to be perceived as universally beautiful art that transcends the artist and even the era to communicate the beauty of the faith.

Collegiality. With the rise of individualism comes a deficit of collegiality – an environment in which artists learn from one another. Consider instead the career of Gian Lorenzo Bernini, the artist who gave us the statue of St. Teresa in Ecstasy and the colonnade of St. Peter’s Basilica, as well as its riveting baldacchino. Bernini did not learn and practice his art in isolation; he studied alongside the men who later become his competition – Francesco Borromini and Pietro da Cortona. With a common skill set and subject area, they both learned from one another as well as spurred one another to new heights of artistic mastery.

Patronage of the arts. Perhaps the most significant difference between the height of sacred art and today is the lack of substantial patronage for artists. Artists had the means and motivation to perfect their art because of the financial backing they had from royalty and from popes. Sacred art was in demand and artistic ability flowered into masterpieces of sacred art.

Can sacred art be revived?

Like the discovery of the Laocoön, which demonstrated the pinnacle that great art can ultimately reach, we can be inspired by the masters of sacred art from past eras. Even more importantly, we must be driven by a love for the beauty of our faith, a beauty that can be communicated to the world through art.

In a Letter to Artists, Pope Bl. John Paul II wrote, “Art must make perceptible, and as far as possible attractive, the world of the spirit, of the invisible, of God. It must therefore translate into meaningful terms that which is in itself ineffable.” In order to fulfill this call, artists must receive an education at least in basic theology so as to communicate truth with their art. To this end, programs in the arts at authentically Catholic universities would not be amiss.

Secondly, the Church as a whole must come to a greater appreciation of true beauty in sacred art. In the Second Vatican Council document Sacrosanctum Concilium, it is recommended that “bishops should have a special concern for artists, so as to imbue them with the spirit of sacred art and of the sacred liturgy. This they may do in person or through suitable priests who are gifted with a knowledge and love of art.” Too often, with the many concerns of the Church, beauty is neglected, and the faithful do not learn to appreciate that truly beautiful sacred art can aid in catechesis and contemplative prayer.

Finally, when there are artists prepared to take on the task and there is a demand among the faithful, there must be an increased patronage of sacred art. While in recent years there has been some revival of beautiful architecture (consider St. John the Apostle in Leesburg, Virginia, and Clear Creek Monastery in Tulsa, Oklahoma), patronage is particularly lacking in the arts. In order for there to be a sustained renaissance of sacred art, there must be financial support.

Sacred art is an integral part of the Catholic tradition, precisely because true beauty is a sign of and cooperation in the work of the Creator. Sacrosanctum Concilium instructs that “all artists who, prompted by their talents, desire to serve God’s glory in holy Church, should ever bear in mind that they are engaged in a kind of sacred imitation of God the Creator, and are concerned with works destined to be used in Catholic worship, to edify the faithful, and to foster their piety and their religious formation.” In turn, the Catholic faithful should foster and support a revival of truly beautiful works of sacred art that glorify God.