Robots Take Over Noodle-Peeling in Restaurants in China 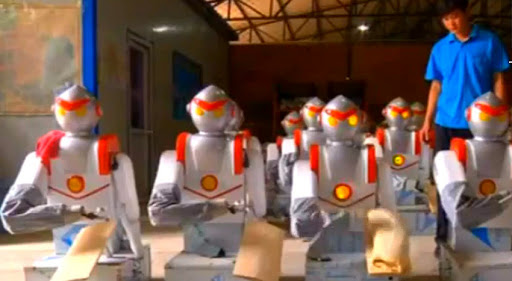 The robots work faster and don’t get tired

Some Chinese restaurants are now using robots in their restaurant kitchens, in this case to peel noodles. The robot noodle-peelers cost just $1,600, which is far less than the usual yearly salary of a cook, $6,400. Further, the robots can work faster and longer hours than a human can do. Peeling-noodles is hard work that fewer people are willing to do anyway, said one of the restaurant owners. Singularity Hub has the story:
Runguan’s robots peel noodle strips from a firm piece of dough and tosses them directly into boiling water “before diners’ eyes can follow the whole process.” To Zhao and a growing number of restaurant owners in China, choosing robots over human noodle cooks is a no-brainer. While a cook doing the same job would make about 40,000 yuan ($6,400) per year, the robot cost him just 10,000 yuan ($1,600). And no human chef can work so tirelessly.
Its price is already down from $2,000 this past August, which is no doubt a big reason why more than 3,000 restaurants that have already relegated their noodle-making to the robot. As the technology improves and the cost to build and run the robot drops, business will only get better for Runguan, who has received four patents for the technology.
That humans can be replaced by robots that do the job faster and cheaper is an idea that now pervades Chinese employers. “Chinese companies usually start considering robots when the payment for a skilled worker exceeds 50,000 yuan ($8,060) a year,” Tan Xueke, a manager at the Xinsong Robot Automation Company in Shenynang, told Xinhua News Agency.