Sanctifying the Ordinary: The Prelature of the Holy Cross and Opus Dei 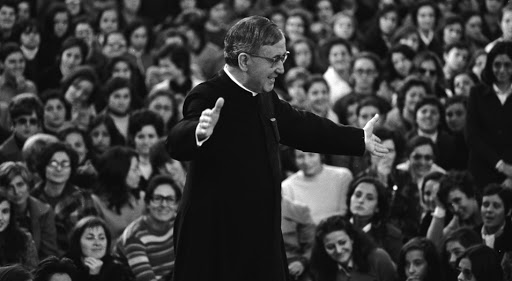 ‘Opus Dei’ is Latin for ‘the work of God’

Tutoring and providing character development classes for inner city students in Chicago. Helping to rebuild houses in San Antonio after substantial flood damage. Leading college students in a weekend by the lake, balancing set hours for studying, prayer and fellowship. Restful and informative mornings for young mothers that include watching and discussing Fr. Robert Barron’s Catholicism series while babysitting is provided for their children. Lectures by some of the most respected theologians and thinkers in the Catholic world at one of Rome’s pontifical universities. All of these moments I have experienced because of the Prelature of the Holy Cross and Opus Dei.

Latin for “the Work of God,” Opus Dei (as it is typically referred to) has as its particular charism the sanctification of daily work. According to its founder, St. Josemaría Escrivá, “It is in the midst of the most material things of the earth that we must sanctify ourselves, serving God and all mankind.” This focus facilitates seeing the face of God in his sons and daughters and in the ordinary tasks of everyday life, whether that be in setting the table for dinner, teaching a class to elementary students, or studying for an exam. Read more about the emphases of Opus Dei.


Wait a minute… what is a prelature?

You wouldn’t be the first person to wonder about this canonical designation. Though it wasn’t necessarily created with this purpose, Opus Dei is (thus far) the only Prelature in the Catholic Church.  The designation of a Prelature was conceived during Vatican II and officially established by Paul VI in the motu proprio Ecclesiæ Sanctæ. Like dioceses, a prelature – run, somewhat obviously, by a prelate – serves a particular group of Catholics. Unlike a diocese, this group is not determined by geographical boundaries, but rather by membership.

Opus Dei became the first prelature in 1982, having been recognized by Pope Bl. John Paul II, who saw the need for their apostolic work in ordinary circumstances. He particularly commented on the structure of Opus Dei noting, “The organic way that priests and laity work together is one of those privileged areas where pastoral activity will take life and be strengthened.”


Who belongs to Opus Dei?

Opus Dei is often mischaracterized as secretive simply because, unlike in religious orders where habits and religious names are the norm, the prelature’s members cannot be singled out so clearly. Members might be your favorite professor in college, an artsy photographer friend or a nurse at a local hospital. Because of their emphasis on sanctifying one’s work and taking seriously the call to be “in the world but not of it,” you will find the 90,000 members of Opus Dei in a multitude of professions and circumstances.

Opus Dei has as its members priests, married individuals and lay consecrated members. They don’t consider these to be different vocations, per se, but rather different ways to live out this work of God.  The majority of members are what is known as supernumeraries – married men and women whose first responsibility is the care and sanctification of their families. Other members live out celibacy either as numeraries, associates or numerary assistants. Diocesan priests can also participate in the charism of Opus Dei by becoming part of the Priestly Society of the Holy Cross. While they receive formation from Opus Dei, they still remain completely under the jurisdiction of their own diocesan bishop.

Priests who belong to the Prelature itself have as their primary work the apostolic care of the lay members of Opus Dei. After being a numerary for a number of years, some men are then asked to consider formation for ordination to the priesthood.

St. Josemaría Escrivá was canonized by Bl. John Paul II in 2002 before a massive crowd in St. Peter’s Square. Since he only died in 1975, there are a number of videos of him available as personal testimonies. He is succinct with his spiritual advice, as well as practical – characteristics that seem in keeping with the charism of the institution. His best-known works – The Way, The Furrow and The Forge – are compilations of these pieces of helpful advice. One passage of The Furrow reads, “If you fix your sight on God and thus know how to keep calm in the face of worries; if you can forget petty things, jealousies and envies, you will save a lot of energy, which you need if you are to work effectively in the service of men” (856).

Born in 1902, parish priest Fr. Josemaría started Opus Dei in Madrid in 1928. The beginnings of the movement survived the Spanish Civil War, and afterwards Escrivá gave retreats and further developed the charism of Opus Dei. Escrivá took seriously the work of evangelizing to everyone in their ordinary lives. This is illustrated by a story I've heard several times: when Opus Dei was starting out, it consisted of all men who were non-smokers. Noting this, Escrivá said that one of the men better pick up the habit – presumably so that he could develop apostolic friendship with smokers by being one of them.

Anecdotes such as these as well as people’s recollections of the colorful Escrivá are a helpful reminder that saints are real people like you and me, with personalities and histories, strengths and weaknesses.


Where can I find Opus Dei?

Centers of Opus Dei exist around the globe as an increasing number of centers are established. They are not quite as easy to locate as a parish since they often take secular names for their centers and retreat houses. In fact, the centers where different formation classes and spiritual direction take place are also where numeraries live and, therefore, are often just an ordinary house in a neighborhood.

True to their unobtrusive nature, apostolates of Opus Dei can be difficult to identify as such. To be honest, it is often unclear to me which initiatives are works of Opus Dei and which are just run by its members. For example, the Catholic Information Center, which serves business people in downtown Washington, D.C., is run by the prelature. Yet, when you walk into its bookstore or chapel, that isn’t immediately obvious. Even less evident to those unfamiliar with the prelature are the many tutoring programs that exist in major U.S. cities and abroad. Having worked a summer at one myself, I gather that the reason for not broadcasting this connection (though it is stated in material somewhere) is that Opus Dei is more invested in proving service and formation than in promoting its own name.

Like almost any Catholic movement, the members of Opus Dei commit to the prelature because they see it as their particular path to holiness. Opus Dei does not exist in competition with or in opposition to the local hierarchy, but rather as a way to support laity and priests in their daily lives. One of the topics I’ve heard Opus Dei speak frequently on is the concept of “Unity of Life.” The idea is that we are not supposed to have separate sectors of life: a professional life on one hand and a spiritual life on the other. Rather, we should live as a son or daughter of God both in our times of prayer and silence and also in our work. It is in this emphasis that Opus Dei makes such a concrete difference in the daily lives of its members and in the many others who take part in the formation it offers.


This article is the first in a series on religious orders, ecclesial communities and apostolic movements within the Catholic Church.