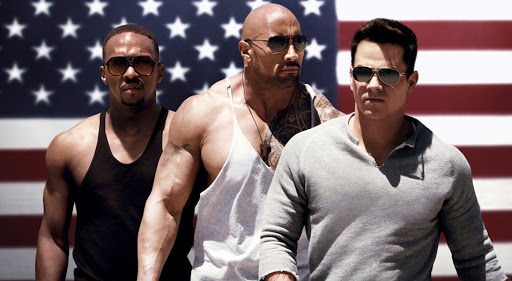 A Michael Bay film with a message

Things were already feeling a bit surreal before Pain & Gain even started. I mean, here we are not even through April, and yet this was the third movie this year starring The Rock to hit the big screen. What's going on? When did Dwayne Johnson become so ubiquitous? Still, I was sure the feeling would pass once the film got underway. But about fifteen or so minutes into the movie, not only did the feeling not recede, it became overwhelming. You see, it's about that time I realized that Michael Bay, the critically lambasted yet commercially successful director known for mega-budgeted small-brained movies full of toys and noise, had actually made a film that was trying to say something.

You're skeptical, I can tell. That's okay, I was too, especially given the film's premise. Inspired by true events, Pain & Gain tells the story of Daniel Lugo (Mark Wahlberg), a petty con-man turned pumped-up personal trainer who becomes unhealthily obsessed with the notion that he deserves more in life than his current position provides for. To get the things he wants, Lugo concocts a scheme to kidnap one of his clients, wealthy businessman Victor Kershaw (Tony Shalhoub), and force him to legally sign over all his belongings. To help carry out the plan, Lugo enlists the aid of Adrian Doorbal  (Anthony Mackie), a fellow trainer who needs money to pay for his excessive steroid use and the expensive medical treatments for the impotence which results from it, and Paul Doyle (Dwayne Johnson), an ex-convict turned born again Christian who's desperate for work, but only willing to participate in the plot if the others agree no real bodily harm will befall the victim.

After a number of comically unsuccessful attempts to capture their target, the trio finally manage to drag Kershaw to a warehouse where Lugo and Doorbal begin to torture him. Sensing that the religious Doyle is uncomfortable with the situation, the Jewish Kershaw pretends to accept Jesus in an attempt to persuade the Christian to let him go. Unfortunately, Lugo realizes what's going on and convinces his girlfriend (Bar Paly) to keep Doyle distracted long enough for the battered businessman to give in and sign all the necessary legal documents. Worse still, even though he's been blindfolded the whole time, Kershaw lets slip that he has recognized his captors, causing the conspirators to make a panicked decision to kill their captive. Their staged accident proves to be as inept as their kidnapping attempts, however, and Kershaw manages to survive and escape. Unable to get the police to believe his wild story about bodybuilding extortionists, Kershaw turns to retired private investigator Ed DuBois (Ed Harris) to help reveal the truth and regain his fortune.

From there the narrative continues to spiral into situations so increasingly ludicrous that the film feels compelled at one point to freeze frame and flash the words "This Is Still A True Story" onto the screen. It's probably a necessary reminder because, honestly, there are events which occur in the movie that no audience in its right mind would accept as true if the facts weren't verifiable in court documents and newspapers. Victor Kershaw (not his real name) did apparently survive being tortured, wrecked, set ablaze, and having his head run over by an automobile. The police did ignore Kershaw's story, dismissing him as a disguised South American drug lord targeted for retribution. Lugo's befuddled mistress, a Romanian beauty contestant who traveled to the U.S. in the trunk of a car in order to become a stripper, did actually believe she was participating in an undercover CIA operation. And inspired by their supposed success with Kershaw, the Sun Gym gang did unwisely attempt to try the exact same thing all over again by threatening a porn kingpin. All of it ridiculous, and all of it true.

Of course, Pain & Gain is a Michael Bay film, so some liberties had to be taken with reality in order to accommodate the director's well known tastes in film making. While there's no room in the story for giant robots, asteroids, or any other means of destroying an entire city, the movie does manage to sneak in a few shoot outs and car chases that never happened in real life. After all, it just wouldn't be a Bay film if something didn't blow up. Plus there's a whole made-up subplot involving The Rock's big toe which is inconsequential and too silly to get into.

But it's what Bay and his writers do with the character of Daniel Lugo that reveals the possible message buried beneath all the mayhem. Unlike the somewhat clever criminal in real life, Lugo is portrayed in the movie as something of a moron obsessed with motivational speakers. His entire philosophy is a jumble of weightlifting slogans (No pain, no gain!) and self help seminars (Get a goal, get a plan, get off your ***!). In Lugo's world view, the only thing preventing anyone from becoming a millionaire is their bad attitude (Do be a doer, don't be a don'ter!). By itself, that doesn't sound too bad. In fact, it sounds almost like good old fashioned capitalism. But as presented in Pain & Gain, Lugo represents the dark side of the American dream. He doggedly pursues what he perceives as the holy grail of life in the States, wealth and recognition, but doesn't care who he steps on to get those things. By presenting Lugo in this manner and showing his ultimate downfall, Bay seems to be critiquing some of the dangers to be found in our economic system, warning against a constant push towards prosperity unfettered by concern for its effects on others. It's a message that could easily find a sympathetic ear in post-recession America.

It's also a surprisingly Christian message, not something one would expect from a Michael Bay action movie (unless somebody found some deep truths in Bad Boys that I missed). As Pope Emeritus Benedict XVI once noted, structures like capitalism are "an indispensable condition for a just society, but they neither arise nor function without a moral consensus in society on fundamental values, and on the need to live these values with the necessary sacrifices, even if this goes against personal interest." Or as Jesus put it, "Tell the rich in the present age not to be proud and not to rely on so uncertain a thing as wealth but rather on God, who richly provides us with all things for our enjoyment. Tell them to do good, to be rich in good works, to be generous, ready to share, thus accumulating as treasure a good foundation for the future, so as to win the life that is true life."

Unfortunately, the very Christians who would most likely appreciate the social message Bay is trying to get across are the same ones most likely to be put off by the movie's treatment of their religion (you know, assuming they made it past all the bloody violence, crude sexual content, and constant drug use depicted in the movie in the first place). The real life Paul Doyle abandoned Lugo shortly after the kidnapping, unwilling to participate in any abuse of their captive. In Pain & Gain, however, the character sticks around for no other discernible purpose other than to allow The Rock to take part in some action scenes and to allow for jokes at the expense of Christianity. The cheap shots range from the silly (Jesus Christ gave me the gift of knocking people the **** out!) to the detestable (Bay includes a gratuitous scene in which a retired minister makes homosexual advances towards Doyle despite the fact that no such thing ever occurred in real life), and all of it could just as easily have been omitted with no harm being done to the story.

It's a shame really, because otherwise, Pain & Gain might actually have been a Michael Bay movie I was willing to pronounce, if not altogether good, at least not disposable. How surreal would that have been?