Benedict Returns to Live in the Vatican As Planned 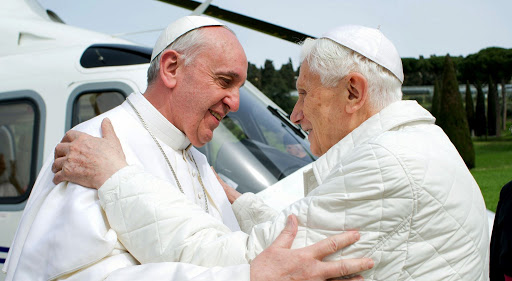 He will continue to live “hidden from the world”

Pope Emeritus Benedict XVI returns to the Vatican to what will be his permanent residence. He has been living at the Castel Gandolfo in Rome until a space for his was prepared in the Vatican. Benedict and Francis have already met and are on friendly terms. CBS has the story:
Former Pope Benedict XVI makes a return to Vatican City more than two months after retiring.
At any other time in church history, the prospect of two popes in Vatican City at the same time would provoke fears of a schism, CBS News' Allen Pizzey noted. Benedict's arrival on Thursday will be less fraught than that, but there are concerns about what influence his presence could have.
When he left the Vatican, Benedict's staff bade him an emotional public farewell. His spectacular flight into exile was watched live by a worldwide audience.
Just before Benedict abdicated the papal throne, he said he would "withdraw into prayer," and live out his remaining days "hidden from the world." That lasted for about as long as it took Pope Francis to unpack his bags and grab his own flight to meet the man now known as Pope Emeritus Benedict XVI.