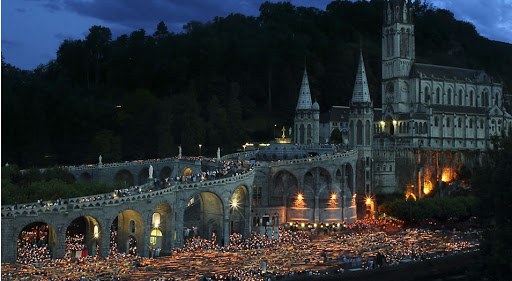 A place filled with hope and joy

Let me start by telling you something that I continue to feel a bit guilty about: I never had any desire to go to Lourdes. So many who love Our Lady, have a devotion to St. Bernadette or are in need of healing pray that they will be able to visit this apparition site and are never able to go. I, on the other hand, acquiesced to the wishes of my travel companions as we made a pilgrimage around France.  Surrendering my dream of visiting Mont Saint-Michel, I instead made my way via sleeper train to the foothills of the Pyrenees to visit the site where the Virgin Mary visited St. Bernadette.

I don’t know about you, but when I think about making a pilgrimage, I think of a somewhat arduous journey. Though historically pilgrims travel on foot, I feel confident that sandwiching this visit to Lourdes between 36 hours on a train qualifies me as a pilgrim.

From everything I had heard about Lourdes, I envisioned it as a sort of Catholic Disneyworld. After all, the Basilica did sort of look like a fairy tale castle, and the crowds surely rivaled any found at the Magic Kingdom. However, if you arrive by train at 7 A.M., your first impression of Lourdes would not be of a theme park. The town was similar to most small settlements in southern France, with approximately 15,000 residents calling it home. At first glance, in fact, I couldn’t even see the Basilica. And while Lourdes may be a lovely town, there is only one reason that 5 million tourists visit each year.

Eventually, one inevitably finds oneself on the main street leading down to the apparition site. Our early morning arrival time ended up being fortuitous, as the many Catholic souvenir shops that lined the avenue were closed. I don’t know about you, but the quickest way to kill my reverence and awe at religious sites is to sell me glow-in-the-dark rosaries or similarly tacky items.

As we approached, I realized that what at first glance appeared to be one large Basilica was actually two centers of worship. The posterior structure is the Basilica of the Rosary, a church built in a Romanesque style that featured two arms that extend around a plaza.  St. Bernadette described Our Lady as holding a rosary in her hand, and over 150 years later, pilgrims continue to visit and pray to the Blessed Virgin Mary. The peacefulness of this sanctuary, which features fifteen chapels dedicated to the joyful, sorrowful, and glorious mysteries, began to convince me that there was indeed something special about Lourdes.

The second, or “Upper” church is the Basilica of the Immaculate Conception, which is built above the rock over the grotto.  The altar of this Basilica is situated directly above the site of the apparitions. A detailed chart on the wall outlined the busy schedule of Masses held in both Basilicas, hosting pilgrims of many nations and tongues.

We ended up attending a Mass in an unfamiliar language that was full to capacity with pilgrims, with many outfitted Knights of Malta there to assist. Looking at these pilgrims, many of whom were in wheelchairs or supported by crutches and who must have gone through strenuous effort to travel here, I recognized that they were searching for something. Surely many of them came because of the dozens of verified miracles that have taken place in Lourdes. And yet, based on the radiant joy on many of their faces, I felt sure that even if their bodies were not healed at Lourdes, they would not go home with their hearts unchanged.

As the morning went on, more and more people flocked to the Basilicas. While I felt blessed after a long journey to have the opportunity to go to Mass and to pray, I was eager to separate from the crowds. It was once I headed towards the baths and the walk by the river that I began to be truly thankful I had come to this place of prayer and healing.

Many are now familiar with the extraordinary story of a fourteen-year-old miller’s daughter named Bernadette who came down to the grotto to collect firewood in 1858. Once there, she saw a lady standing in a niche in the rock. The Blessed Virgin Mary appeared to St. Bernadette on eighteen occasions, speaking to her in her local dialect. Our Lady, who gave her name as “the Immaculate Conception,” directed Bernadette to drink from an almost non-existent spring. That spring soon began to flow and the first of many people was healed there by immersing her injured arm in the water. This healing and over sixty to follow have all been unable to be explained by natural causes.

Crowds began to gather to such a point that the mayor of Lourdes barricaded the grotto and refused to allow people access to it. Several months later, the grotto was reopened and has seen a steady stream of visitors ever since. Around the spring were built a series of baths in which people can come and immerse themselves with the assistance of Grotto staff.

Across the small river is what is known as the water walk – a series of stations with images from Scripture accompanied by small fonts of water. It is approximately in this spot that Bernadette last saw Mary from across the water.  Walking along the river, I could envision the way that this area was when Bernadette was a young girl.  Here in the setting of serene, natural beauty, Mary made herself known to a teenager who did not even recognize her. And it was here, away from the crowds and magnificent architecture, that I finally embraced Lourdes.

I had the opportunity to drink from the water of Lourdes, to pray for healing in my life. And while I was not one of those who received physical healing, I nevertheless felt tangibly the grace of this place. Here, Mary came to bring Bernadette – and by extension, the whole world – a message of the love of Christ. This fact, this event, is what makes a pilgrimage to Lourdes a spiritual journey.

Yes, the Basilicas were beautiful, and the swell of pilgrims was inspiring. (No, I did not buy a glow-in-the-dark rosary.) But what was most significant is that even I, a non-too-enthusiastic pilgrim, encountered the love of Christ and of his Mother in this place.

Some pilgrims will participate in the myriad of events occurring from dawn until dusk, including Mass, the Way of the Cross, candlelight processions, and immersion in the spring. Others, like me, may simply bask in the peace that is found in this place where Mary appeared. Regardless of how you spend your time in Lourdes, everyone I observed left with similar expressions of hope and of joy.

As I made my back up the thoroughfare towards the train station, stopping briefly for some mediocre food, I left transformed. My friends were right: Lourdes was worth the long trip on the train, worth giving up other destinations. After all, if Mary saw fit to appear there from heaven eighteen times, the least I could do is visit Lourdes to seek her guidance and her Son’s gift of peace.


Interested in making a pilgrimage to Lourdes? Visit http://en.lourdes-france.org/