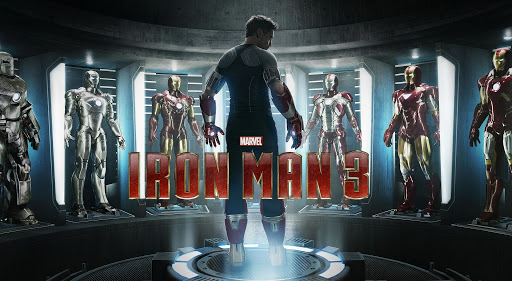 Can Iron Man be another James Bond franchise?

Back when I was a kid, I was always told that three was a magic number (somewhere in the ancient mystic trinity, you get three, and all that stuff), but I quickly learned that old saying was only hit or miss when it came to movie sequels. After all, for every Return Of The Jedi there’s always a Superman III (sorry to remind you), so just because a movie is the third installment in a popular franchise, that’s no guarantee that it will be any good. All you can do is take your chances, buy your ticket, and watch the thing through to the end. And that’s more than appropriate in the case of Iron Man 3, because the key to understanding the movie actually lies in the end credits.

But before I jump ahead, let's go back to the beginning. After a brief prologue set in 1999 in which we see a pre-Iron Man Tony Stark (Robert Downey Jr.) callously ignore fellow inventor Aldrich Killian (Guy Pearce) while trying to bed scientist Maya Hansen (Rebecca Hall), we jump to the present where we find that things are not quite as rosy for everybody’s favorite billionaire industrialist as they appeared at the end of The Avengers. It seems that battling an alien armada and nearly dying in the cold reaches of outer space after flying a nuclear missile through a wormhole has understandably left Tony with something akin to posttraumatic stress disorder. Even the mere mention of New York City, the scene of The Avengers’ final confrontation, is enough to send the normally unflappable hero into a panic attack. Unable to sleep and continuously fretting over the safety of his girlfriend Pepper (Gwyneth Paltrow), Stark spends most of his time locked away in his lab building and rebuilding new variations of his Iron Man armor.

While in this exhausted and erratic state, Tony foolishly issues a public challenge to The Mandarin (Ben Kingsley), the shadowy leader of a terrorist organization which has recently been hacking into television satellite feeds in order to claim responsibility for a rash of seemingly random bombings around the globe. As Tony tries to assure Pepper that he has everything under control, the barely remembered Maya arrives at his front door with information regarding The Mandarin and Stark’s possible connection to him. Unfortunately, within minutes of Maya’s arrival, an all out attack is launched on Stark’s mountainside home, nearly killing Pepper and sending the building with Tony inside it crashing into the sea. After the dust settles, Tony finds himself alone, believed to be dead, and without a working set of armor. With only the help of a young boy (Ty Simpkins) whose workshop he manages to drag the Iron Man suit into, Tony begins the slow process of repairing his armor while simultaneously trying to discover the secret of The Mandarin before the villain can carry out his threat to assassinate the President.

It’s at this point that the movie risks the possibility of losing some fans, depending on what type of film they came to see. As it turns out, most of Iron Man 3 involves Stark running around sans armor tracking down clues and building gadgets to help get himself out of various predicaments. In fact, even before The Mandarin's attack, there are numerous scenes of Tony interacting with a remote controlled version of his armor rather than actually being inside it. This has the effect of relegating the Iron Man suit to the position of background prop for a good chunk of the film’s running time. It’s always around, but not always part of the action.

And as the end credits make clear, this was a conscious decision on the part of the filmmakers. As the credits roll and the name of each actor appears, they’re presented over various stylized freeze-framed head shots of their characters. The technique has a very intentional 1960s spy movie feel to it, but just in case you’re not old enough to catch that particular visual reference, the last words seen scrolling across the screen are “Tony Stark Will Return” – a direct homage to the end credits of almost every James Bond movie ever made. It’s abundantly clear that what director Shane Black and star Robert Downey Jr. were going for in this third outing of the Iron Man franchise is not so much Tony Stark/super-hero as it is Tony Stark/super-spy action hero.

It's hard to blame Shane Black for taking this route, really. First off, if you’ve got Robert Downey Jr. starring in your film, then you’re going to want to keep his famous mug on the screen for as long as possible instead of keeping it hidden behind a face mask. But in terms of the story, it makes sense as well: Over the course of his previous three appearances, Tony Stark had undergone a very distinct character arc from self-centered egotist to self-sacrificing hero. As he sat eating shawarma with his fellow adventurers at the end of The Avengers, Tony’s redemption was complete. That being the case, Black had to find something new to do with the character, and he did so by putting Tony in a situation very likely familiar to anyone who has ever undergone a conversion experience.

You see, even though Tony had experienced a true inner transformation, that was no guarantee everyone from his past was going to be quick in accepting this change of heart. As such, the events that unfold in Iron Man 3 are in part a direct result of Tony’s mean spirited dismissal of Aldrich Killian and self-gratifying seduction of Maya Hansen lo those many years ago. The words Tony had arrogantly written on his name tag at that fateful business conference – “YOU KNOW WHO I AM” – come back to haunt him again and again throughout the course of the film, even once being uttered by The Mandarin himself. Those he harmed in the past do know who Tony is, or at least who he was, and they hate him for it.

Those of us Christians who may have led less than admirable lives before our conversions will find much to sympathize with in Tony's plight. Yes, Jesus forgives everything, but others might not be so quick to do the same. In those situations, all we can really do is continue on practicing the virtues we once ignored, hoping and praying that others will eventually recognize the truth in the change in our persons. This is where Tony finds himself in Iron Man 3. He has to prove to everyone, himself included, that his new found heroism doesn’t come from simply putting on a fancy suit, but is the result of becoming a new creature on the inside. Or, as he pronounces at one point in the film – armor or no armor – “I am Iron Man.” Once he makes this realization, Tony is able to follow the advice of St. Teresa of Ávila about what to do when the devil (or in Tony’s case, The Mandarin) inevitably shows up to remind us of our past: just remind HIM of HIS future.

Still, even though the choice to keep Tony out of the armor for a lot of Iron Man 3 is a thematically appropriate one, that doesn’t mean everyone is going to appreciate it. Those expecting an all-out super-hero extravaganza à la The Avengers might leave feeling a bit let down. (And as an aside, those comic fans who appreciate faithful renditions of the source material are probably going to walk out of the theater bitterly disappointed at the unforgivable change in one of the characters.) But for those who have been hankering for an old-school James Bond flick full of campy dialogue and cool gadgets, this might just be the movie for you. Think of Iron Man 3 as Skyfall starring Roger Moore, and you’ll have a good idea of the feel of the film. If that sounds like something you’d like to see, then hurry up and get in line for a ticket, because they’re going to be long.