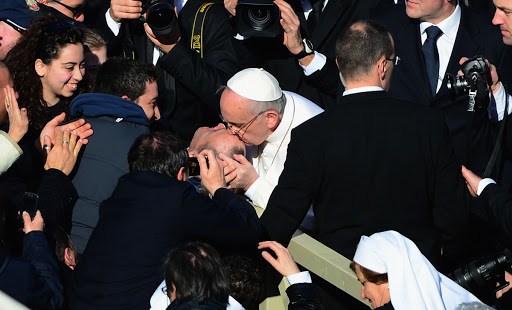 Christians should endure suffering with peace

Vatican City – Reflecting on how St. Paul endured pain for Christ, Pope Francis said that good Christians do not complain about their trials but endure them with patient silence because their hearts are at peace.
A Christian “who constantly complains, fails to be a good Christian: they become Mr. or Mrs. Whiner, no? Because they always complain about everything, right?” the Pope remarked in his May 7 homily at St. Martha’s residence.
The Christian response to suffering is “silence in endurance, silence in patience,” he stated.
During his Passion, the Pope noted, Jesus “did not speak much, only two or three necessary words … But it is not a sad silence: the silence of bearing the Cross is not a sad silence. It is painful, often very painful, but it is not sad. The heart is at peace.”
The pontiff based his homily on the first reading of the day, Acts 16, in which St. Paul and Silas were persecuted and thrown in jail for proclaiming the Gospel.
But they “were joyful because they followed Jesus in on the path of his passion. A path the Lord travelled with patience,” he added.??“This does not mean being sad. No, no, it's another thing!” Pope Francis taught.
“This means bearing, carrying the weight of difficulties, the weight of contradictions, the weight of tribulations on our shoulders. This Christian attitude of bearing up, of being patient.”
“This is a process – allow me this word ‘process’ – a process of Christian maturity, through the path of patience. A process that takes some time, that you cannot undergo from one day to another. It evolves over a lifetime, arriving at Christian maturity. It is like a good wine.”??The Pope observed that many martyrs were joyful as they approach their final moments, such as the martyrs of Nagasaki who helped each other, as they “waited for the moment of death.”
Some of those men and women went to their martyrdom as if they were going to a “wedding party,” he said. This attitude of endurance, he added, is a Christian’s normal attitude, but it is not masochistic. It is an attitude that leads them “along the path of Jesus.”?
Returning to the example of Paul and Silas, Pope Francis noted that in spite of being in prison, they were praying in peace. “They were in pain, because then it is said that the jailer washed their wounds while they were in prison – they had wounds – but endured in peace. This journey of endurance helps us deepen Christian peace, it makes us stronger in Jesus.”??The Holy Father finished his remarks by repeating that a Christian is called to endure suffering just like Jesus, “without complaint, endure in peace.”
This patience “renews our youth and makes us younger,” he said, mentioning how he has seen this among elderly people in hospice care “who have endured so much in life.”??“Look at their eyes, (they have) young eyes, they have a youthful spirit and a renewed youth,” he underscored.
“And the Lord invites us to this: to be rejuvenated Easter people on a journey of love, patience, enduring our tribulations and also – I would say – putting up with one another. We must also do this with charity and love, because if I have to put up with you, I'm sure you will put up with me and in this way we will move forward on our journey on the path of Jesus.”

(Originally published by Catholic News Agency on May 7th, 2013)