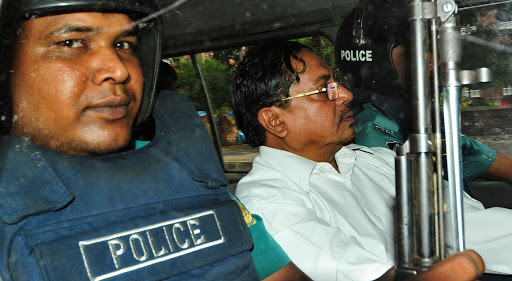 © STR / AFP
Muhammad Kamaruzzaman, a leader in the Bangladesh oposition is sentenced to death for war crimes
Share
Print
Aleteia | May 09, 2013

Muhammad Kamaruzzaman, one of the leaders of the Opposition in Bangladesh has been sentenced to death by the war crimes tribunal. He has been charged and found guilty for mass murder as well as torture, rape and kidnap, which he is supposed to have commited during the 1971 war of independence.

Today's verdict against Muhammad Kamaruzzaman was the fourth in Bangladesh's war crimes tribunals since January, and many feared it could spark another wave of deadly street violence between his supporters and security forces.

Prime Minister Sheikh Hasina has called the trials a long-overdue effort at obtaining justice against war criminals four decades after Bangladesh split from Pakistan. Critics accuse Hasina of using the tribunals to decimate the country's opposition parties ahead of elections scheduled for next year.

Obaidul Hassan, the head of the three-judge tribunal, said the charges had been proved beyond a doubt and sentenced him to death.

Defense lawyer Ehsan Siddiky said justice was denied to his client and he promised to appeal.

During the trial, Kamaruzzaman denied the allegations and said the prosecution was politically motivated.

Kamaruzzaman is the assistant secretary-general of Jamaat-e-Islami, a hardline Islamic party that opposed Bangladesh's independence, but denies participating in wartime atrocities. The party is a key partner in the opposition coalition.