‘Sold For Marriage’ in Jordan 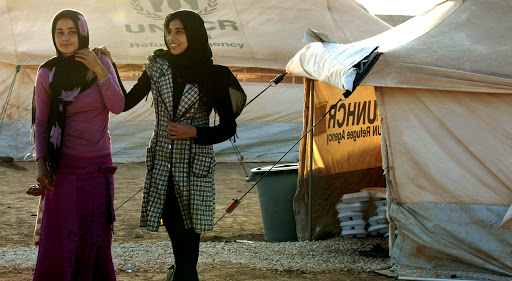 With little aid getting through to them from NGO's, Syrian refugee women have resorted to selling themselves into marriage in order to save their families from starvation. Most of these women are barely over sixteen and are being bought by rich older men, between 50 and 80 years of age, from surrounding countries such as Saudi Arabia. These men are reported to be attracted to the lighter skin and green or blue eyes of these young girls.

Beth McLeod from the BBC has more on the devastating story:

Kazal says she is 18 but looks much younger. She has just got divorced from a 50-year-old man from Saudi Arabia who paid her family about US $3,100 (UK £2,000) to marry her. The marriage lasted one week.

"I lived with my husband in Amman, but we weren't happily married. He treated me like a servant, and didn't respect me as a wife. He was very strict with me. I'm happy that we're divorced."

Her huge, blue eyes fill with tears when she talks about the marriage.

"I agreed to it so I could help my family. When I got engaged I cried a lot. I won't get married for money again. In the future I hope to marry a Syrian boy who's my own age."

Andrew Harper, the Representative of the UN Refugee Agency (UNHCR) in Jordan, is concerned that some of the 500,000 Syrian refugees in the country are increasingly turning to such desperate measures.

"We don't have enough resources to give aid to all those who need it. The vast majority of refugees are women and children. Many of them are not used to going out to work, so survival sex becomes an option."

His office in central Amman is surrounded by hundreds of newly arrived refugees, waiting in long lines to register for aid. He says the UNHCR has intervened with some families who have been offering their daughters up for early marriage.

"I can't think of anything more disgusting than people targeting refugee women… You can call it rape, you can prostitution, you can call it what you want but it's preying on the weakest."