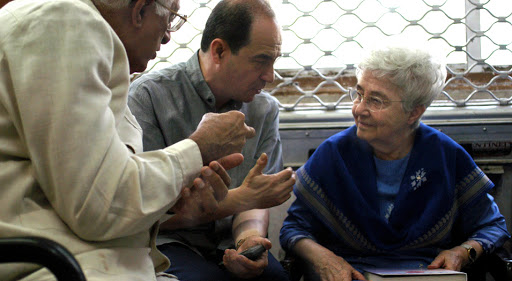 “Be first to love”

He once dreamed of meeting his future spouse. She once thought of the family they would have. When war hit Trento, these dreams, as well as their very lives, became uncertain. The hub for railways going in and out of Germany and Italy during World War II, Trento was the target of a number of bombings, forcing its inhabitants to seek shelter. Sometimes these shelters would be as insubstantial as the arch of a bridge. Inhabitants hid, not knowing whether or not they would survive the attack.

Among the citizens of Trento was a young schoolteacher named Chiara Lubich, who recalls how she brought only her Bible to these shelters, seeking peace in those fearful moments. One Scripture passage particularly struck Chiara and her friends, in which Christ prayed, “Father, may they all be one” (John 17:21). Knowing that he would soon face death, Jesus prayed for unity.

Fueled by the wartime lesson that nothing on earth is secure, nothing is guaranteed except Christ’s presence, Chiara and her friends took Christ’s prayer to heart. They identified what was truly fundamental in Christian spirituality: to live God’s love in the present moment. This quest for unity in charity became the foundation of what is now known as the Focolare movement.

Translated as “ family hearth” or “fireside,” Focolare listens to Christ’s words: “For where two or three are gathered together in my name, there am I in the midst of them” (Matthew 18:20). Yet, they questioned, how would they keep Jesus in their midst? One friend of the Focolare movement told me that they sought to “be that sacrificial love that Jesus demonstrated for us. By living that way, we keep the presence of Jesus very much alive.”

The members of Focolare – known as focolarini – seek God as the ideal that will never go away, and they do this as the Lord asked: together in community.

The Focolare movement is truly unique in that not of all of its members are Catholic – in fact, many who have spiritually benefited from the movement are not even Christian. As the Pontifical Council for Laity states, the principle that “God is the only ideal which endures when everything else is falling down” can be understood and embraced by Catholics of every stripe, as well as those of other denominations and faiths. So genuine and effective are the focolarini in conveying this message of love that popes have even asked them to converse with other religions on behalf of the Catholic Church.

One might wonder how it is that they’ve made such positive connections on behalf of the Catholic Church with Buddhists, Protestants, the Orthodox, and many others. The answer?  You win people over by your love for them – your genuine, self-sacrificing love. Once this bond of love is established, then matters of theology can be discussed. In other words, evangelization is rooted first and foremost in a relationship that is based on love for one another.

A priest who has received formation from the movement described the moment in which he realized how fully the focolarini take to heart one of their preferred sayings: “Be first to love.” While in a program in Italy, the participants would often partake of apples from a local focolarino’s farm. The priest noticed that since apples were out of season, the fruit was often subpar. One day, he became aware that, without fail, as the apples were passed around, each person would take the worst-looking apple for him or herself, rather than the best.

This small example demonstrated for him how the powerful presence of Christ in our midst is experienced most often when we love one another with a sacrificial love, just as Christ loved us.

Christ’s own sacrifice stands in the forefront of the hearts of the adherents to the Focolare movement. They strongly identify with the forsaken Christ of the Passion. Think of that moment, on the Cross, when Jesus cried out, “My God, my God – why have you forsaken me?” In that instant, he created a bond with the disenfranchised, the abandoned, those who feel alienated from God. Therefore, focolarini seek to love even those who scorn them: “always, immediately, and with joy.” They reach instantly with this love because of their strong belief that love heals and keeps the Devil from causing division.

Secondly, Focolare looks to Mary as the model disciple. She made herself totally available to God. There is an emphasis on learning from Mary how to live the will of God, to always place the Will of God first in their lives. When they pray the Rosary, focolarini don’t just pray the decades, but meditate on them and on how they can learn from the mysteries. So much do they look to Mary that throughout the world, there are Cities of Mary. This “city”, known as a Mariapolis, is a temporary city dedicated to Mary, formed by both members and friends of the movement who come together in community to learn discipleship from Mary. In a Mariapolis, which generally lasts for about a week, one learns how to be a disciple like Mary.  In the spirit of learning from Mary – who is, of course, the one who brings Christ to the world – the leader of Focolare will always be a woman.


The Life of the Movement

Chiara Lubich died in 2008 and was mourned not only by focolarini and by other Catholics, but also by many throughout the world who were inspired by her witness. The Ecumenical Patriarch of Constantinople, Bartholomew, wrote of her passing, “There are some people whose life touches lives so universally that, upon their passing, they remain an indelible inspiration and grace. One such life – a life worth living and well worth remembering – was that of Chiara Lubich, Founder of the Focolare Movement.”

The movement, which began in 1943 amidst the destruction of World War II, is now present in over one hundred nations across the world. Members gather together in Focolare through mutual commitment to unity in Christ. Single focolarini live in community by gender, whilst married members live with their families, yet remain closely connected with a Focolare. Along with members, many friends of the movement stay involved through attending a Mariapolis or other events.

The Focolare movement does not fall along political lines; in fact, it strives to stay away from such divisions. This is not to say that those involved are not active in public life, but rather that their heart is first and foremost rooted in love for Christ. Author Amy Uelmen writes, “What draws people to the Focolare spirituality is not a particular political agenda, but the spirituality of unity, which is grounded in the prayer of Jesus – ‘that all may be one’ – and the conviction that this can permeate their everyday lives.”

Whenever one speaks of ecclesial movements, the question always arises, “Why choose one over another?” Indeed, as part of the Catholic Church, Focolare and other movements lead us to the same end: union with Christ in heaven. The distinction remains in how we best follow the path that the Church gives to us. For those who adhere to the spirituality of Focolare, that way is love in imitation of Christ and in union with one another.