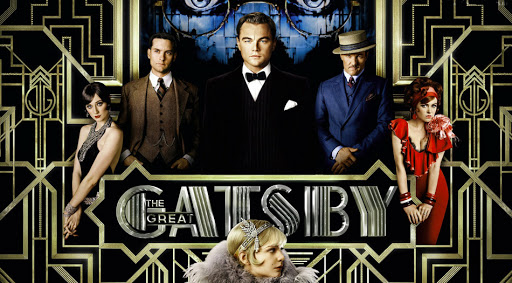 Who would have thought that after all these years away from high school, I'd be asked to write about The Great Gatsby again? Looks like I’d better break out the Cliffs Notes, huh? According to America’s premier student study guides, "The Great Gatsby follows Jay Gatsby, a man who orders his life around one desire: to be reunited with Daisy Buchannan, the love he lost five years earlier. Gatsby’s quest leads him from poverty to wealth, into the arms of his beloved, and eventually…"

Well, let’s not spoil the ending, shall we? After all, some of you out there might actually have been assigned something else to read in your American Literature class besides F. Scott Fitzgerald’s classic novel. Let’s just say that this latest film adaptation (the fifth if you count the long lost silent version from 1926) stays fairly faithful to the source material, chronicling the tragic events witnessed by bond salesman Nick Carraway (Tobey Maguire) after he moves to Long Island and becomes entangled in the sordid lives of its wealthy inhabitants. In particular, Nick is caught up in the troubled marriage of his cousin, Daisy (Carey Mulligan), and her adulterous husband, Tom (Joel Edgerton), a former sports star and heir to old money who not only openly flaunts his mistress in public, but even insists on dragging Nick along on one of his indiscretions.

Disillusioned with his friends, Nick finds himself instead drawn to Jay Gatsby (Leonardo DiCaprio), the mysterious millionaire who lives next door, after spotting the man standing alone on a pier one night, his hand outstretched to the seeming darkness. So when he receives an invitation to attend one of the frequent extravagant soirées being held at Gatsby's mansion, Nick is both confused and delighted. The invitation is not without its ulterior motives, however, as Gatsby reveals his past ties to Daisy and his hopes to reenter her life with Nick’s help. Finding the oddly humble demeanor of Gatsby preferable to the careless behavior of Tom and the rest of the reckless rich inhabiting Long Island, Nick agrees to aid Jay in his efforts. But as might be expected, things don’t go exactly as planned, especially once Tom begins to suspect what’s going on.

It’s a pretty simple story really, but as Cliffs Notes tells us, it is one that Fitzgerald riddled with “a variety of themes – justice, power, greed, betrayal, the American dream and so on.” Perhaps that’s why The Great Gatsby has become such a staple of so many teacher’s required reading lists and a well to which Hollywood keeps returning to draw upon. This time around, it’s director Baz Luhrmann's turn to take a stab at interpreting the story for a new generation, and he does so in the manner we’ve come to expect from him. That is to say this year’s Gatsby spasms wildly between moments of quiet beauty and loud hollow gaudiness, between moments of acting reel highlights and cringe-inducing campiness, between moments of emotional involvement and cold detachment. In short, The Great Gatsby is a movie audiences can love and loathe in equal measures.

Let’s start with what Luhrmann is best known for: his penchant for over-the-top visuals. When you consider the novel’s description of the chaotic shindigs thrown at Gatsby’s home, it’s hard to imagine another contemporary director more suited to bringing them to life than the man behind Moulin Rouge, and he does indeed acquit himself well in their depiction. But besides the parties, Luhrmann’s tendencies towards visual excess also succeed in other scenes involving the decadence of Long Island’s rich, the staginess of his sets and computer graphics perfectly capturing the artificialness behind the opulence. However, it doesn’t work so well in the scenes involving the lower class neighborhoods where Tom’s mistress resides. Because Luhrmann can’t lay off the CGI, the world of the poor seems just as phony and soulless as that of the upper class which Fitzgerald’s story would have us srutinize. Plus, there’s the simple inescapable fact that, much as in his other works, Luhrmann’s “Gee whiz, look what I can do with the camera!” technique makes it hard to warm up to the actors for the first fifteen or twenty minutes of the movie.

Which brings up my next nitpick: if you’ve got access to actors like DiCaprio and Maguire, for heaven’s sake, trust them to act. The Great Gatsby has what must be one of the most annoying voice overs I’ve heard in a long while, often telling us what we should be (and in some cases are) seeing. There’s actually a scene in which Gatsby turns to look at Daisy and we hear Maguire say, “And then he turned and saw Daisy.” We know that, you clod, we can see it happening! And we don’t really need Maguire telling us what the characters are feeling, either. The leads in this movie, Maguire included, are all quite capable of communicating to us what their characters are experiencing emotionally. Trust me, Baz, it’s why they keep getting nominated for awards. The best scenes in the movie, the ones with real emotional resonance, are those in which Luhrmann sets his camera down and just lets his actors do their jobs – moments like the first awkward reunion between Gatsby and Daisy or the tense climatic confrontation in the hotel room where everyone finally reveals their true feelings and intentions. While DiCaprio is the standout in these scenes, everybody proves to be good when they don't have all the noisy distractions getting in the way.

Speaking of noise, I suppose we’re obliged to mention the soundtrack. I’ll go on record as saying the use of modern music in the movie doesn’t bother me that much personally since it basically compliments the visual style on display. Still, when your film is set in a time period that produced the likes of Duke Ellington, Louis Armstrong, and Fletcher Henderson, it seems a bit of a shame to have nothing but rap music blaring almost every time a black character appears on the screen. (Just saying.)

To Luhrmann’s credit though, even with all the swooshing cameras, extraneous visual collages, and questionable musical moments, he does still try his best to hang onto the themes Fitzgerald scattered throughout his novel. As the Cliffs Notes on the book explains, “The Great Gatsby is regarded as a brilliant piece of social commentary … [sending] strong messages about the elitism running throughout every strata of society … Fitzgerald [also] proudly tackles the theme of spirituality … The world of The Great Gatsby is one of excess, folly, and pleasure, a world where people are so busy living for the moment that they have lost touch with any sort of morality, and end up breaking laws, cheating, and even killing … Fitzgerald's post-war partiers have substituted materialism and instant creature comforts for philosophic principles.”

That’s not to say Luhrmann successfully communicates all of this in his film, so any student inclined to cheat and base their term papers off this movie instead of reading the book would be better served picking up the Cliffs Notes instead. But he does make the effort. Time and again, Luhrmann’s camera returns to the image of an enormous billboard advertisement displaying two giant bespectacled eyes hovering over the streets near the home of Tom's mistress. As one character describes them (amazingly not Maguire in a voice over), they are like the eyes of God watching over everyone, ready to hold them accountable for all their secret sins. And when God has seen enough… well, let's just say that he wasn't kidding when he said “it is easier for a camel to pass through the eye of a needle than for one who is rich to enter the kingdom of God.” Even Gatsby, arguably the least worst of the bunch, learns this in the end.