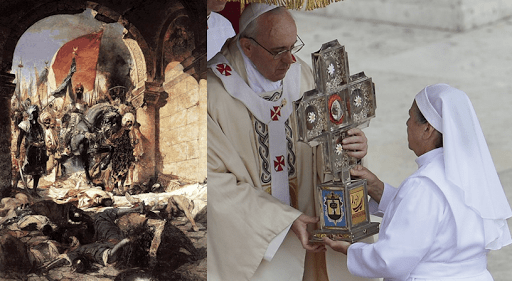 Pope Francis on Sunday canonized hundreds of fifteenth century Italian martyrs who died rather than renounce their Christian faith.

“The martyrs’ faithfulness even unto death and the proclamation of the Gospel are rooted in the love of God that has been poured into our hearts through the Holy Spirit,” said Pope Francis during the May 12 canonization Mass at the Vatican.

He saw in their lives an inspiration for victims of persecution today.

“Let us ask God to sustain those many Christians who, in these times and in many parts of the world, right now, still suffer violence, and give them the courage and fidelity to respond to evil with good,” the Pope said.

In 1480, Turkish invaders beheaded Antonio Primaldo and his hundreds of companions in the far southeastern Italian town of Otranto after they refused to give up their faith.

Pope Francis compared Antonio Primaldo to the first Christian martyr, Saint Stephen, who is described in the Acts of the Apostles as “a man full of the Holy Spirit.”

“This means he was full of the love of God, that his whole person, his whole life was animated by the Spirit of the risen Christ, so as to follow Jesus with total fidelity, even unto to the gift of self,” he said.

He said St. Antonio Primaldo and companions found their strength “in faith, which allows us to see beyond the limits of our human eyes, beyond the boundaries of earthly life, to contemplate the heavens opened and the living Christ at the right hand of the Father.”

“This first saint born on the beautiful Colombian soil teaches us to be generous together with God, not to live the faith alone but to communicate, to radiate the joy of the Gospel by word and witness of life in every place we find ourselves,” he added.

Pope Francis said she was a teacher who then became “the spiritual mother of the indigenous peoples.” She gave them hope and welcomed them with “the love she learned from God,” bringing them to God in a way that respected their own culture.

He underscored that the saint “teaches us to see the face of Jesus reflected in the other, to overcome indifference and individualism.”

The Pope said she teaches us this by “welcoming everyone without prejudice or constraints, with love, giving the best of ourselves and above all, sharing with them the most valuable thing we have, Christ and his Gospel.”

The Pope said she “gave up a comfortable life to follow the call of Jesus” and taught people to love poverty “in order the more to love the poor and the sick.”