Syrian Rebel Leader Mutilates the Body of A Dead Soldier 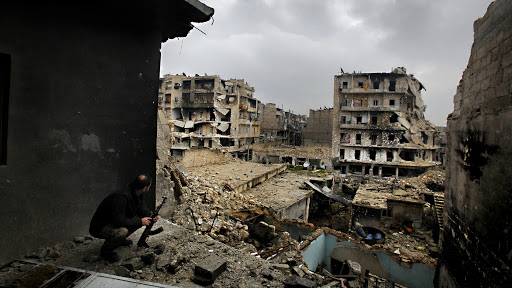 A rebel leader has been shown mutilating the body of a deceased soldier in Syria. The mobile phone recorded video was obtained by Human Rights Watch (HRW), a US based organisation. The man filimng the atrocity identifies the perpetrator as Abu Sakkar, who HRW has confirmed as the commander of rebel group Independent Omar al-Farouq Brigade.

The footage showed Abu Sakkar bending over a dead pro-government solider, then cutting the man's heart and liver out he holds them up to the camera, crying "I swear to God, soldiers of Bashar, you dogs – we will eat your heart and livers! Takbir! God is Great! Oh my heroes of Baba Amr, you slaughter the Alawites and take their hearts out to eat them!" After these remarks he picks up the heart and puts it into his mouth, seemingly taking a bite out if it.

Sakkar's 'cameraman', while filiming his commander, rejoices in the mutilation: “God Bless you Abu Sakkar" he exclaims, "you look like you are drawing [carving] a heart of love on him.”

The anarchist Sakkar, who is believed to be from Homs, has shocked the world with this most recent atrocity, as he drags the bloody Syrian conflict down to new levels of depravity. HRW decided not to release the unedited version of the video due to its terribly disturbing and graphic content. They have however released an edited and blurred version.

HRW have verified the authenticity of the footage using video forensics, and through further investigation they have identified Sakkar as being the same man who participated in the the shelling of the Lebanese Shi'a villages as well as posing over the dead bodies of Hezbollah soldiers.

Peter Bouckaert, the emergencies director for the organisation stated "It is one of the most disturbing videos to come out of the Syryian conflict in the last two years. This person is not an unknown identity" he explains "he was one of the founders of the mainstream Farouq Brigade from the city of Homs…from the Baba Amr district," an area which, Bouckaert states, was "subjected to an extremely brutal government seige, which dessimated the district of Baba Amr and left many people dead including some family members of this commander."

This barbaric act is not an isolated one, gruesome attacks of this kind are being committed on both sides, and increasing in number, with brutality being used as a tool of war by each side to intimidate the other and to show the utmost disrespect. Bouckaert explains that these acts and this latest video "shows the increasingly sectarian nature of the fighting that is happening in Syria right now."

According to International Laws of War, mutilation of dead bodies is a war crime. These growing war crimes are also being glorified through video phones and other media outlets.

Here Bouckaert emphasises the "dilemna" that the world leaders are in, stating that "it should be a wakeup call to the West and the International Community, that they cannot just stand by and see this descent into sectarian extremism on both sides."  However he also recognises the difficult situation that they find themselves in, for arming the opposition could mean that the weapons fall into the hands of war criminals such as Sakkar. He explains that "many of these groups are fighting along side one another in Syria, the mainstream and the extreme, so it's very difficult to seperate the good guys from the bad guys."

Where are the International Leaders?

After a meeting with US President Barack Obama on Monday, the UK Prime Minister David Cameran made the public statement from the White House that they have not made the decision to arm opposition groups in Syria, but he did say "we have ammended the EU arms embargo in order that we can give technical assistance and technical advice."  He also called for a "major diplomatic effort" that he explains is necessary "to achieve a transition at the top in Syria so we can make the change that the country needs."

These preliminary steps seem to have already been taken as reports are in that the UN is set to vote today on a resolution tract that would condmen Assads regime and accept the Syrian National Coalition as the adequate party for achieving a political transition.

However the rather large stone in the shoe could prove to be Russia, who is allied with Assad's regime (and has incidentally been his main supplier of weapons these past two years), and according to Reuters is opposed to the resolution draft.