The Legion of Mary: An Army at the Service of the Church 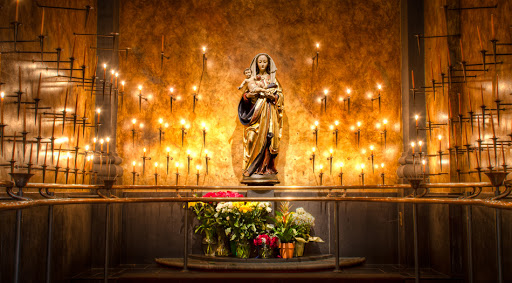 The New Evangelization before the term was coined

If you belong to a Catholic parish, you may know more than you think about the Legion of Mary (not to be confused with the Legion of Christ, founded by the scandal-ridden Marcial Maciel). This was the realization I had recently when taking a walk with my son to the church down the street. Though this article was on my mind, I wasn’t on a hunt to find out more about the Legion’s presence at my parish; I simply went there to visit. And yet, once I was aware of the organization, signs of their work were everywhere. A flier posted near the adoration chapel invited parishioners (in English and Spanish) to host a statue of Our Lady of Fatima at their homes. A pamphlet explained the works of mercy done by the Legion, and another sheet welcomed interested parishioners to come to a meeting on Monday nights or to call for more information. Apparently, the Legion of Mary was hiding in plain sight.

The more I learn about the Legion of Mary, the more I am convinced that it has been a powerful instrument for the New Evangelization, even before the term was coined. And yet, the Legion is not always familiar to the average parishioner. This seems to be because the Legion of Mary does not seek recognition or attention for itself, but exists simply to offer Catholics support in their pursuit of personal holiness.


“Every person that is born is called to be a saint”

The Legion of Mary was founded by an Irish man by the name of Frank Duff, now a Servant of God. Working for the Civil Service in Dublin, Frank was exposed to the squalor of tenement living and the societal ills that came with it: prostitution, drunkenness, and general immorality. He grew in awareness of this material poverty, and this awareness developed into an intense concern for spiritual poverty. Frank, a practicing Catholic and member of the Society of St. Vincent de Paul, put his concerns into action. Inspired by Protestant-run soup kitchens, Duff ran Catholic institutions that also cared for people’s spiritual needs. In 1921, he founded the Legion of Mary.

One of the foundational premises of the Legion of Mary comes from Duff's short work, “Can we be Saints?” He writes, “Every person that is born is called to be a saint. Take it as most certain that you – no matter how unfitted your life may seem for holiness – are being given graces sufficient, if corresponded with, to bring you to sanctity.” He goes on to encourage Christians to persevere by centering their day around the Eucharist, dedicating their work to God and constantly turning to prayer.

Members of the Legion of Mary take seriously this call to holiness. They strive to become better Catholics and to support other lay Catholics in doing the same. They turn outwards towards others in their parishes, seeking to bolster the faith life of their entire community.  Taking Frank’s hard-working example to heart, the Legion also dedicates themselves to regular spiritual works of mercy, which they define as falling under the categories of “Conversion,” “Conservation,” and “Consolation.”

Whether it be going door to door inviting residents to return to the Catholic Church or simply being witnesses to their faith in their everyday life, conversion of souls is a work that legionaries undertake daily. I’ve certainly seen the emphasis on the conservation of Catholic life in our parishes; just one example that comes to mind is when the Legion assisted a diocesan-wide effort to encourage parishioners to regularly pray the rosary. Armed with miraculous medals, the Legion systematically reached out to tens of thousands of people, reminding them of our need for Mary’s intercession. Legionaries also make a commitment to console: they visit prisons, hospitals, nursing homes, and shut-ins, recalling Duff’s words that “We should bear in mind that serving our neighbor out of love of God means that what we do to him we do to God.”


An Army for the Church

The term “legion” comes from the word for a unit in the Roman army, a force which was drawn up of Roman citizens. Like its namesake, the Legion of Mary consists of ordinary lay Catholics, undertaking a pursuit of sanctity in fellowship with one another. The Legion boasts over 3 million members, making it the largest lay apostolate in the Church. Since 1921, they have expanded from Ireland to be present in almost every country in the world.

There are two different levels of membership in the Legion: one active, the other associated through prayer. Active members commit to weekly meetings, two hours of weekly apostolic work, and the daily recitation of the Catena. Auxiliary members commit to praying the rosary daily as well as an invocation and prayer of the Holy Spirit, five decades of the rosary and the accompanying invocations, the Catena, and some concluding prayers. As its name implies, all members dedicate their prayers and their works to Mary, whom they honor under the title “Mary, Mother of Souls and Mediatrix of All Grace.”

In considering various ecclesial communities, one of the most attractive features of the Legion is how familiar it seems. It is not proposing a particularly revolutionary way of living the faith, but rather promoting the prayers and works of charity that we are all already called to live out as Catholics. Perhaps it is simply the fact that I come from an Irish background like the Legion of Mary, but Frank Duff seems like he could easily be the holy and hardworking man I noticed in my parish growing up, and the Legion members the adults who served out the parish pancake breakfasts while reminding me to pray to Our Lady.

They are the sort of parishioners who you always see around, who are clearly deeply invested in the parish, but don’t necessarily want to be the center of attention. Rather, they are ordinary men and women who believe that to truly live out the Catholic faith, you must do so with diligence and perseverance. I noted with interest that they won’t even allow their auxiliary members to make contributions to the Legion of Mary. In laying out requirements for auxiliary membership, one site says, “There is no cost to join the Legion of Mary. No fees, no dues, no supplies to buy. You will be given a copy of the prayers, you will be given a rosary. Donations to defray the costs of these items will not be accepted, nor will other donations.”

While they don’t pursue accolades or hearty thanks, they certainly aren’t shy about describing the benefits of the Legions to those interested in joining. Not only does the Legion help Catholics live a holy life and learn more about their faith, but they also claim (somewhat tongue-in-cheek) that the Legion keeps them young, relating that Frank Duff was still riding a bike at the age of 91! And, like many ecclesial groups, the Legion offers the promise of community, speaking of the vertical relationship members develop with God and Our Lady and the horizontal relationship built with other Legion members.

Next time you are at your parish, look around and see if there are pamphlets about the Legion in the vestibule or ask your pastor what role legionaries have in parish life. You might be surprised to find out that those active parish members you always just assumed were really devout are supported in their quest for sanctity by the Legion of Mary. It is fitting that the Legion looks to Mary as their model in holiness. Mary identified herself as the handmaid of the Lord; the Legion of Mary follows in her footsteps as they put themselves at the service of the Church.