Where the Queen of the Rosary Appeared to Ordinary Children 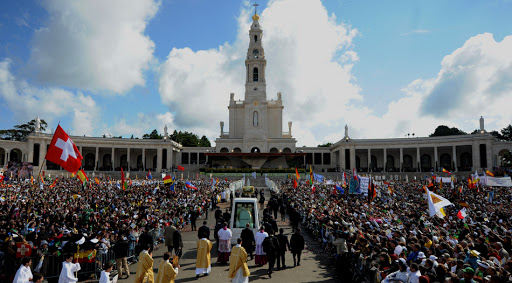 Learning to love Our Lady at Fatima

Do you remember the cartoon movie from the 80s, The Day the Sun Danced? It’s the kind of video that found its way onto CCD shelves across America and managed to simultaneously intrigue as well as terrify Catholic school children. This half-hour film tells the story of the three shepherd children who encountered Our Lady in Fatima, Portugal.

I must admit that this video is probably the most thorough knowledge I had of Our Lady of Fatima until I traveled to the site of the apparitions. As I took the seven-hour bus ride from the southern Spanish city of Cordoba to Fatima, I recalled the awe I experienced when, as a child, I saw that the sun danced in the sky – a miracle that was witnessed by 70,000 people. Even many skeptics would come to believe in Mary’s appearances and, consequentially, in Christ. However, I also remember the somewhat horrifying scene from the cartoon where a local administrator threatened the young visionaries, telling them he would boil them in a pot of oil if they did not tell him the messages from Our Lady.  Though this was fairly scary for me to watch as a kid, I remember how brave I thought those kids were. I also really wanted to know if Mary could appear to me as well!

Crossing the border into Portugal, it wasn’t a far leap of the imagination to envision being in pastoral Fatima in 1916. The terrain is still home to a number of sheep (cities were nowhere to be seen), with both Lisbon and Porto being well over 100 kilometers away. The apparition site, around which the pilgrimage destination is built, is fairly isolated, and I didn’t realize we were drawing near until the bus pulled into a parking spot.

I have to admit, when I first encountered Fatima, I was bewildered. Standing at the forefront of the grounds is a building, the shape of which can most accurately be described as that of a waffle maker. I discovered later that it was consecrated in 2007, cost €80 million to construct, and is the eighth largest Christian church in the world. (Personally, I think it also belongs in the top ten list of ugliest churches, especially since it is located in one of the Catholic Church’s most treasured destinations.)

Once I recovered from visiting the Church of the Most Holy Trinity, I turned around and faced a much more pleasant aesthetic: a sloping plaza standing between me and the Basilica of Our Lady of Fatima, consecrated in 1953. In a niche over the doorway is a statue of Our Lady of Fatima sculpted by an American priest, Fr. Thomas McGlynn, O.P. It is perhaps the most accurate representation of the Virgin of Fatima found anywhere; he collaborated with one of the visionaries, Lucia, who related to him what Our Lady looked like when she appeared. When I reached the interior of the Basilica, I had it largely to myself and was able to appreciate its serene beauty, accented with arching white ceilings and highlighted with gold. The Basilica contains 15 altars, dedicated to the Joyful, Sorrowful, and Glorious mysteries of the Rosary.

We had the privilege of celebrating Mass in the Chapel of Apparitions, located in the middle of the plaza. As its name implies, this glass enclosed chapel marks the spot where Mary appeared to Lucia, Jacinta, and Francisco. It certainly was a profound place to partake in the Eucharist – a place where Christ sent His Mother to deliver messages of the reality of hell, the need for conversion and the request that Russia be consecrated to the Immaculate Heart of Mary.

However, the image that will most firmly stick in my memory is that of pilgrims climbing the slope of the plaza, as well as circling the Chapel of Apparitions, on their knees. They did this as a gesture of penance and conversion of heart, as a prayer of thanksgiving or of supplication. Strange to these Anglo-Americans eyes were the tokens of gratitude for prayers answered seen at the pilgrimage site. Left behind were rubber legs, arms, hearts and other body, signifying the specific healing experienced that the pilgrims attributed to the grace of God.

While the pilgrimage site of Fatima offered the opportunity for prayer and meditation, I more thoroughly enjoyed visiting the small village of Aljustrel, where the children of Fatima actually grew up. True, almost the entire town now lives off of pilgrimage tourism, which somewhat detracted from the atmosphere of the place. Nevertheless, walking down the small street lined with humble single-story houses drew me into the story of Lucia and her cousins, Jacinta and Francisco.

I thought about what it would have been like to be a child in 1916 Portugal, shepherding sheep and passing the time with one’s siblings or cousins, as these three children where doing the day that an angel appeared to them. I saw that spot, that ordinary place near the village, where an angel (which Lucia described as having “the form of a young man, quite transparent, and as brilliant as crystal in the rays of the sun”) appeared to them not once, but three times. During each appearance, the angel led the children in prayer and prepared them for the apparitions of Mary that were to come.

I stood in the bedroom of one of the visionaries, made up as it would have been when she slept there. It was so simple, no different from any other shepherd girl’s room. And yet, as “normal” as she was, an angel of the Lord and the Mother of God appeared to her. The nephew of the visionaries – himself an old man – led the tour of the house. As we spoke to him, it was impossible not to recognize that really, the children of Fatima were not that different from any of us.

Indeed, seeing the environs of the three visionaries made the story of Our Lady of Fatima come alive in a way that the 1980s cartoon could never accomplish (though the film was certainly better than nothing). I came to understand that by appearing to Lucia, Francisco, and Jacinta – children who were not so different from you or me – Our Lady was, in reality, coming to all of us.

I’m not one for religious souvenirs. I didn't bring home a rubber arm or any of the religious memorabilia being sold in the streets of Aljustrel. (But I will admit to bringing home a bottle of Port – and that didn't last long!) What I did bring away with me, though, was a more complete knowledge of what formerly had been just a story to me – an amazing and somewhat alarming account of visionaries on a television screen. Through the pilgrimage to Fatima, I was able to get to know the children of Fatima, their story and their homes. And, after praying in the place where Mary appeared, and walking to the spot where the angel first visited the children, a foundation was laid in my heart for a solid devotion to Our Lady and a desire for the conversion to which she called us during the Fatima apparitions.